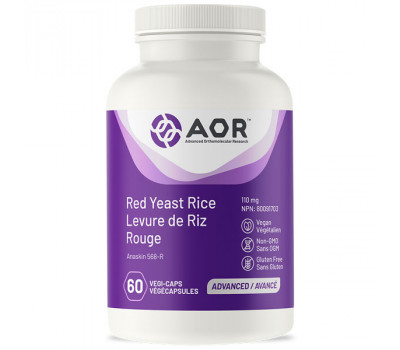 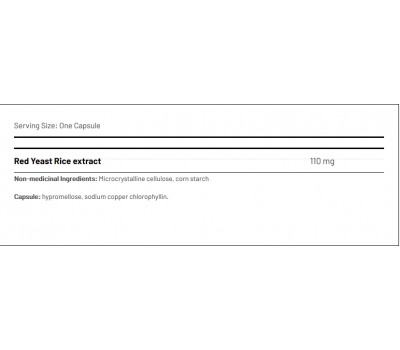 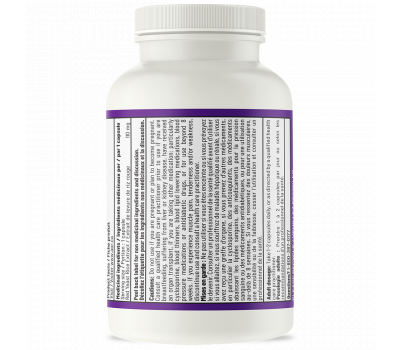 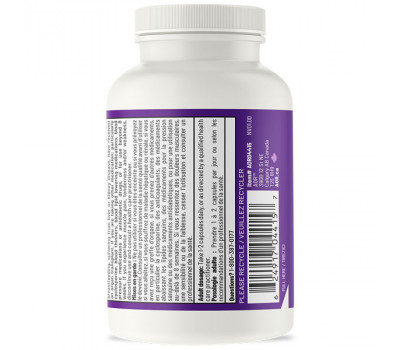 AOR Red Yeast Rice Ankascin Red 568-R contains red yeast rice extract. Red Yeast Rice (RYR) has been used for thousands of years as a natural remedy for good health. RYR provides antioxidants which support heart health. AOR’s RYR is one of the only supplements guaranteed to be free from lovastatin and citrinin (a harmful toxin common to many other RYR supplements).

Unlike many other red yeast rice supplements on the market, AOR Red Yeast Rice with Ankascin 568-R is subjected to a patented extraction process that removes citrinin, a toxic by-product of the fermentation process. Most red yeast rice products on the market also contain monacolin K, a compound that is associated with side effects similar to statin drugs. These side effects can include myopathy, muscle symptoms such as pain and weakness, and rhabdomyolysis, a condition in which muscle fibers break down, releasing harmful substances into the bloodstream which can affect the liver and kidneys.

AOR’s Red Yeast Rice is the world’s first red yeast rice product that does not contain any monacolin K or citrinin. Additionally, AOR has standardized the amount of biologically active pigments monascin and ankaflavin, which offer cholesterol lowering effects without the side effects of monacolin K.

background reading
Red Yeast Rice for the treatment of mild to moderate hypercholesterolemia. Red yeast rice is a dietary staple in Asia, produced by growing yeast (Monascus purpureus) on rice. Studies found that red yeast rice was linked with the maintenance of healthy cholesterol levels, and therapeutically for reducing the total cholesterol, LDL, and triglycerides in patients suffering from hypercholesterolemia. Further investigations found the metabolites produced by red yeast rice that provide this cholesterol lowering benefit:
1. Monacolin - comprises 10-15% of most red yeast rice products on the market. Monacolin K in particular is a compound found in red yeast rice that is chemically identical to lovastatin, a synthetically produced pharmaceutical drug used in cholesterol management. Since these compounds are chemically identical, they act by the same mechanism to lower cholesterol, and also exhibit the same side effects. However, AOR’s Red Yeast Rice is subjected to a process that removes Monacolin K, which means that it will not produce statin-like side effects. Rather, its benefits are due to the other compounds in red yeast rice extract which also have cholesterol lowering activity, and do not produce these side effects.
2. Monascin and Ankaflavin: these yellow pigments are produced by the rice fermentation process and have been linked to reduction in total cholesterol, LDL and triglycerides, independent of monacolin K. AOR’s Red Yeast Rice is standardized for monascin and ankaflavin to ensure clinical efficacy without statin-related side effects.

Cholesterol management in the body
Cholesterol, triglycerides, LDL, and trans fats - all are regarded as the culprits of increased risk of cardiovascular events such as heart attacks and strokes. However as scientists uncover the function of these molecules the conversations have begun to shift to focus on the regulation of these molecules, rather than total reduction. Cholesterol, an animal sterol, is a waxy substance found in every cell of our body. It is composed of a steroid ring attached to an alcohol, a unique molecular structure that plays a number of very important roles in our body as well as ensuring normal physiologic functioning. Cholesterol is used as a base for the production of steroid hormones, bile salts and vitamin D, as well as maintaining cell membrane fluidity. Without cholesterol, we would not be able to properly digest foods, our cell structure would not be able to withstand any changes in temperature, and a significant number of important hormones such as estrogen, and testosterone could not be produced.

Due to their hydrophobic or “water repelling” nature, cholesterol, fatty acids, and some proteins cannot travel through the bloodstream alone. Instead, they are transported to the liver via the lymph in complexes called chylomicrons. Once inside the liver cells the chylomicron is degraded and the contents are repackaged for distribution to the tissues. Cholesterol is “chaperoned” around the body by the formation of lipoprotein complexes. There are a number of lipoprotein complexes which are classified based on the ratio of proteins to fat and cholesterol. Low density lipoproteins (LDL), very low density lipoproteins (vLDL) and chylomicrons all have very high fat and cholesterol content as compared with the protein rich high density lipoprotein (HDL). Once packaged into vLDL, the cholesterol enters circulation and some of the cholesterol is deposited to the tissues along with fatty acids. The LDL should be taken up by liver cells after attaching to the LDL receptor on their surface. Meanwhile HDL scavenges blood vessels and tissues for free form excess cholesterol. It then returns to the liver where cholesterol can be excreted through the bile or recycled.

Cholesterol and Cardiovascular health
How does this process become dysregulated and how does that impact cardiovascular health? The answer, like most health conditions, is multifactorial. Cholesterol can build up due to increased production, increased consumption, or decreased excretion. The cause of the build-up as well as the form of cholesterol in the plasma is important when determining risk and for treatment. Genetic disorders such as familial hypercholesterolemia can affect the LDL receptors on the surface of liver cells called hepatocytes causing an increased amount of LDL in circulation. Individuals vary in severity depending on the type of genetic mutation. Increased plasma LDL-C levels confer an increased risk of cardiovascular events irrespective of diet and lifestyle in these patients. However genetic causes affect a small percent of the population diagnosed with hypercholesterolemia.

The majority of cases of hypercholesterolemia in North America can be linked to diet and lifestyle. Increased consumption of processed foods, trans fats and refined sugar, along with high-risk lifestyle factors such as low fiber diets, cigarette smoking, obesity and inactivity are some examples of factors that can lead to increased levels of LDL (bad cholesterol), reduced levels of HDL (good cholesterol), or both. Normally LDL-C is taken back to the liver and recycled. However, excess LDL-C can adhere to and infiltrate the walls of blood vessels. When this happens it will form a reactive oxidative species or free radical that will attract immune cells. From the complexes formed more white blood cells will congregate and an inflammatory cascade will be initiated. As more and more cells are attracted to this middle layer of a blood vessel, plaque will begin to build up, disrupting blood flow, and may eventually block the vessel entirely, or a piece of the plaque can rupture and travel to distal sites. All of these scenarios can have very serious consequences for an individual’s wellbeing. The “arthrogenic triad” are lab findings that are indicative of increased risk for the development of atherosclerosis- this includes high serum LDL, low HDL and high triglycerides.

Understanding statins
Conventional treatments for hypercholesterolemia are the statin class of drugs. This family of drugs acts by blocking the enzyme HMG-CoA reductase which is a key step in the production of a number of important molecules in the liver including cholesterol. Side effects of taking these drugs will arise from the widespread inhibition of many of the downstream products in this pathway. Production of coenzyme Q10, which is important for energy production within the mitochondria, will also be affected. It is reported that nearly 10-12% of patients on statin drugs will experience statin induced myopathy, or muscle pain. This is likely due to the fact that isoprenoid production will also be inhibited, the decreased production indirectly increases muscle cell death. Statin drug use has also been reported to temporarily elevate liver enzymes- particularly transaminases. These drugs may increase the risk of developing interstitial lung disease, and cause memory loss and confusion while taking these drugs. Finally in a small subset of patients taking high dose, high potency statins- the risk for Type 2 Diabetes Mellitus was increased.

Red Yeast Rice extracts often claim to be monacolin K (statin) free, in compliance with Health Canada regulation. However, many companies do not strictly adhere to these regulations. Most red yeast rice products also contain citrinin, a harmful toxin produced during the fermentation process.

AOR Red Yeast Rice with Ankascin 568-R is the only commercially available red yeast rice supplement that is guaranteed to be free from monacolin K and citrinin. AOR Red Yeast Rice is standardized for the biologically active pigments monascin and ankaflavin, to ensure efficacy without statin-related side effects. These pigments have shown improved cholesterol targets in hypercholesteremic patients as well as maintenance of healthy levels in otherwise healthy populations. Further, these pigments have shown improved HDL levels while no change was detected in levels markers of muscle degradation.

Red Yeast Rice and Cholesterol lowering
In a meta-analysis conducted in 2015, researchers found that red yeast rice did have a statistically significant reduction in LDL levels, while the liver and kidney damage risk was not significantly elevated compared to control groups.

Red Yeast Rice metabolites monascin and ankaflavin on cholesterol lowering
In a 2010 study, monascin and ankaflavin were found to have a similar lipid lowering and hypocholesterolemic effect to monacolin K. Further, these pigments were able to increase HDL levels whilemonacolin K was not. A study done in 2013 on rat models showed that these yellow pigments were able to stimulate lipolysis while inhibiting differentiation and lipogenesis. This led to anti-obesity effects after 8 weeks in rats fed a high fat diet.

A human clinical trial in China also found that patients treated with ankaflavin did not exhibit any increase in liver and kidney markers that would suggest overburden.