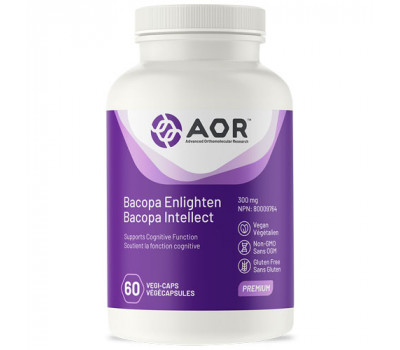 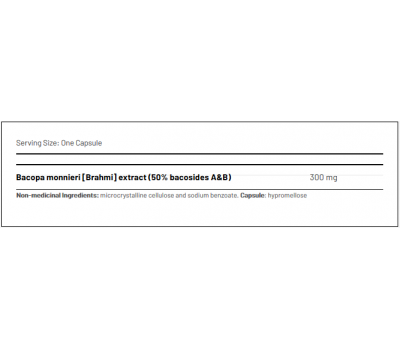 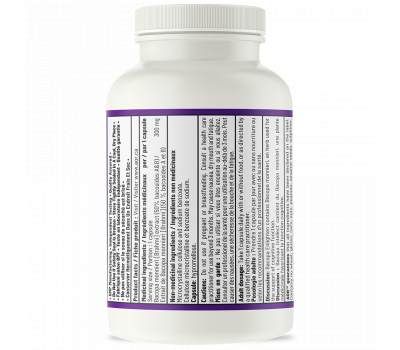 AOR Bacopa Enlighten is Bacopa monniera Linn, a herb used in traditional Ayurvedic medicine for support of cognitive function. Recent science supports this role along with powerful neuroprotective effects through the upregulation of the brain's own antioxidant defense enzymes.
Bolstering brain function and relieving anxiety, while gearing up the brain's ability to defend itself from free radical assault, Bacopa forges new steel from the carbon of ancient wisdom and the iron of today's neuroscience.

background reading
Bacopa monniera Linn (formerly Herpestis monniera), the water hyssop, is creeping annual plant with succulent leaves and delicate mauve flowers. While it can be found throughout the world in marshy areas, Bacopa is revered in India, where it is known as Brahmi. The observation that this beautiful botanical supports cognitive function and promote tranquility goes back to the very beginnings of Ayurveda, the traditional medical system of India. The two core Vedic medical texts, the Caraka Samhita (first to sixth centuries CE) and the Sushruta Samhita, which may go back into the early centuries BCE, both speak of its ability to provide a wide range of benefits to mental function. The later Bhavprakasa Varg-Prakarana informed readers that Brahmi "acts as a brain tonic and promotes longevity."

Even today, newborn babies in India are ceremonially anointed with Bacopa in the belief that it will open the gateway of intelligence, and children are given Bacopa teas and syrups to promote their mental development. In such a cultural context, it is therefore not surprising that most of the earlier human Bacopa trials in humans were performed in children. In one double-blind, controlled study, 110 boys, ages 10 to 13, of average intelligence as measured on IQ tests, took either a Bacopa supplement or a dummy wafer every day for nine months. Before and after starting the supplement program, the boys took a battery of tests of brain function, including intelligence, memory, and reaction time.

At the end of the trial, there were no significant improvements in the cognitive functioning of the boys who had been given the dummy wafers. But math skills, direct memories, and several subtests of a variation on the IQ tests were all significantly improved in the boys who took the Bacopa supplement.

But later studies have also been performed in adults. One of them focused on people with anxiety disorders - another aspect of cognitive function for which Bacopa is traditionally believed to be helpful. After four weeks of taking a Bacopa syrup, a group of 35 workers with anxiety were found to have improved memory, less anxiety, better social adjustment (as measured by the Asthana-Bell adjustment inventory), and less mental fatigue at work - something measurable in terms of greater work output. The supplement also very slightly lowered their blood pressure, from 117 to 112 millimeters of mercury (on the "top" number of your reading - the systolic blood pressure).

All of these effects were mild, however - probably because of the short duration of the trial. A longer (twelve-week), better-designed study on the brain-boosting powers of Bacopa has given the herb a much stronger endorsement. Australian researchers performed a double-blind, placebo-controlled study involving 46 healthy men and women. The whole group took a battery of neuropsychological tests. Then, half of this group took a 300 milligrams of a Bacopa supplement (carefully standardized to contain at least 50% of the two known active markers, bacosides A and B) every day, while the remaining 23 took dummy pills designed to look, smell, taste and weigh the same as the real thing.

The participants were re-tested five weeks later, and again at the twelve week mark. No significant differences between the folks taking the real supplement and those taking the bogus pill were reported after the first five weeks - a fact which might explain why the effects in the four-week syrup study, discussed above, were so mild. But at the end of the twelve-week study, compared to the group taking the placebo pill, men and women supplementing with Bacopa showed significant improvements in cognitive function, processing visual information 15% faster as measured by the inspection time (IT) test, showing a 14% greater rate of learning, a 33% lower rate of forgetting, verbal information, along with a a remarkable 108% better ability to consolidate new information without interference from previously-learned data ("proactive interference") - all detected by Rey's Auditory Verbal Learning Test (AVLT), still the standard for verbal learning tests.

Few side effects were seen in the study, the most notable being an increase in thirst and urination. And, interestingly, the people taking Bacopa actually suffered fewer headaches than did those getting the dummy pills!

Recent animal studies have given us some exciting clues about the potential neuroprotective effects of this Ayurvedic secret. Bacopa has been shown to protect animals from drug-induced memory losses and the depletion of the key memory neurotransmitter acetylcholine in the hippocampus - the seahorse-shaped organ of the brain responsible for sorting new information for storage into memory. It has also been found to increase the synthesis of new protein in the rodent brain. But the most exciting of the recent animal studies shows that Bacopa boosts the brain's production of the key protective antioxidant enzymes superoxide dismutase (SOD), glutathione peroxidase (GSH-Px), and catalase (CAT). In this, Bacopa is closely paralleling the effects of deprenyl (selegiline), a drug prescribed for Parkinson's disease, which is being taken by many people in the life extension movement because animal studies suggest that it has potent anti-aging effect. Remarkably, however, the effects of Bacopa were shown to be even more broad ranging than those of deprenyl: Bacopa cranked up levels of these enzymes in every tested area of the brain, while deprenyl failed to upregulate these enzymes in the hippocampus.

Bolstering brain function and relieving anxiety, while gearing up the brain's ability to defend itself from free radical assault, Bacopa forges new steel from the carbon of ancient wisdom and the iron of today's neuroscience.

Mental Support
Bacopa enlighten is an extract of a traditional Ayurvedic plant that has been used for centuries to support the function of the brain. It has powerful protective effects on the brain and nervous system and has been found in clinical studies to boost mental function.

Protection for the Central Nervous System
Bacopa protects the brain by enhancing its production of its own antioxidant enzymes. These enzymes are required to quench the formation of free radicals, which are highly reactive byproducts of metabolism that cause damage to DNA, proteins, and other cellular components. In clinical trials, Bacopa has been found to boost cognitive function in both children and adults. It was found to help with memory and other mental functions, visual processing, anxiety, social adjustments and mental fatigue.

A Natural Brain Booster
By helping to prevent oxidative damage in the brain and nervous system, Bacopa is able to keep the mind functioning at its best performance level. AOR’s Bacopa Enlighten provides a clinically supported dose of this traditional nutrient

recommended use
take 1 capsule a day or as recommended by your qualified health care consultant.
Consult a health care practitioner for use beyond 3 months

contra-indication
May cause nausea, dry mouth and fatigue
Do not take when you are pregnant, lactating, or trying to conceive.