How pets can improve your health 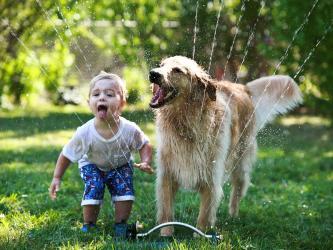 Nearly everyone of us lives with a pet in their household or has grown up with pets in their family as pets are such a source of joy.
Pets can bring relief in stressful periods as the simple act of petting an animal can reduce stress levels and lower blood pressure, which goes as far as easing chronic pain due to the release of endorphins and curing post-traumatic disorders!

People with pets are less at risk for depression since their pets will cheer them up.
Animals give something to focus on instead of the negative thoughts a depressed person is prone to have. When a pet pays attention to you, they're giving you unconditional love and acceptance.
Dog owners are also much fitter as they spend twice as much time walking than people who don't own dogs. The combined effect of lower stress, blood pressure and increased fitness reduces the risk on cardiovascular disorders.

Kids that own a pet learn how to be responsible and care for animals, just like they can care for other people later on. Most of the time, the death of a pet will also be a child's first death experience, which is an important learning experience and will bring a family closer together in grieving over its loss.

Dog owners have an easier time to start a conversation with complete strangers, which can be a big bonus for an unmarried single, who has a hard time to approach an attractive person. With a cute pet, you might be approached first.

With their keen sense of smell and high devotion to their owners, dogs can be taught to distinguish low blood sugar in breath and and to alert their diabetic owners in time.

Lately, another advantage of owning a pet has received attention. Children that are exposed to pets before they are six months old and continue to grow up around farm animals, cats or dogs are less likely to develop allergies, asthma and eczema later in life and generally have a more robust immune systems resulting in less infections and lower need of antibiotics.
Apparently, exposure to pets allows a babies' immune system to develop and mature better. The best results were found with dogs that spent less than six hours inside a house. Animals that brought in more dirt and microbes, strengthened a babies' immune system faster.

While microbes in dirt educate the immune system, a lack of exposure to viruses and other environmental factors seems to make children more susceptible to disease. This contrast is called 'the hygiene hypothesis'.
A toddler in the playground that is putting dirt in its mouth out of curiosity is actually inoculating itself in primitive way, which can be beneficial unless the dirt which is contaminated with dangerous chemicals or faeces from sick animals.

Sick animals generally don't spread to humans, but when one major disease hits your pet, their immune system is weakened and the pet may get other infections *are* spread to humans. This risk is especially high for non-domesticated wild animals.
The worst situation imaginable happens when cleanliness is achieved with the use of antibacterial soap or mouth wash, which fails to kill all of the dangerous bacteria, yet kills beneficial bacteria that can protect your health.
The rise of resistance of dangerous bacteria against antibiotics and disinfectants is so grave that the Dutch Health Council (Gezondheidsraad) has put out a warning to consumers not use antibacterial soap or mouthwash but stick to regular soap and tooth paste, but instead follow simple rules of hygiene by washing hands regularly and keeping cooked food away from raw, possibly contaminated food.

As for the health of your pet, few people realize how pets can benefit from orthomolecular supplements just like human do. Sometimes, pets simply can take the exact same products except for the dosage, which needs to be lower due to their smaller size and weight.
For probiotics things work differently, as the intestines of cats and dogs differ from that of human beings. This is why Jarrow developed a special pet probiotic with pet-specific bacterie strains.