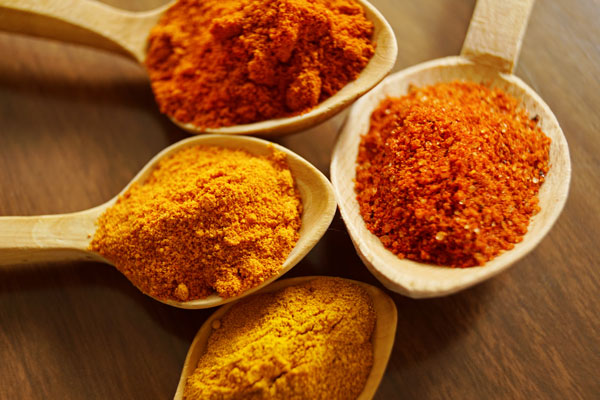 Why is turmeric such a magical herb?

Recently, it became once again evident how mainstream media is being manipulated by Big Pharma to scare the public away from using well-known and empirically proven supplements towards using pharmaceutical medicine.
One such health scare tactic was aimed towards the use of curcumin, which has become one of the most popular health supplements , among which to support people recovering from breast cancer.
Apparently, one effect of curcumin is that it speeds up detoxification processes in the liver, which results in medicine being broken down more easily.
In this particular health scare, that's an undesirable side-effect because tamoxifen, a frequently used post-treatment drug, is also broken down more rapidly and hence, becomes less effective at lower dosages, when combined with high dosages of curcumin.

While this was touted as proof how dangerous it is to take unproven herbal supplements, this is nothing out of the ordinary. Many other products can speed up the liver detoxification process, with the most famous of them being the mood-enhancing herb St. John's Wort.
However, there are other products that do the contrary, among which grapefruit as well as green tea , which slow down the same detoxification liver enzyme.

SSome of you may not be aware yet why both turmeric and curcumin have become such popular condiments as well as food supplements. Therefore we present you a breakdown on what curcumin is about.

The first confusion starts with turmeric and curcumin.
Curcumin is one of the bioactive ingredients found in turmeric. Turmeric is a root-like herb/spice that belongs to the ginger family.
The main active constituents of turmeric can be divided in two groups: curcuminoids and turmeric oil. Turmeric contains a wide variety of phytochemicals, including curcumin, zingiberene, curcumenol, curcumol, tetrahydrocurcumin, turmerin, turmerones, and turmeronols.

Curcumin (also known as Curcumin I) was first isolated in 1815 as the ‘yellow coloring matter’ from turmeric.
However, it took until 1910 when the chemical structure of curcumin was identified and until 1953 when the 3 different curcuminoids were identified and given 3 separate names:
- curcumin (Curcumin I),
- demethoxycurcumin (curcumin II)
- bisdemethoxycurcumin (curcumin III)

Curcumin is insoluble in water and has a brilliant yellow color under normal circumstances, but can turn red in alkaline conditions.

History of the documented use of curcumin

While turmeric has a very long history of being used as a folk medicin in India, the written documentation of its use in Western medical journals is much more recent.
The first article suggesting the use of curcumin in humans was published in 1937 by Oppenheimer.
In this study, curcumin was used to treat gallbladder diseases. Rapid emptying of the gallbladder was seen and as per the report the author treated 67 patients suffering from
inflammatory gall bladder disease.
Both oral administration and intravenous injection deliver good results and no side effects were seen.

Later in 1949 and 1972 the antibacterial and blood sugar lowering effect of curcumin was documented.

Also, its cholesterol lowering , antioxidant and anti-inflammatory properties were documented in 1970s.

In 1980s Kuttan et.al documented the anti-cancer properties of turmeric and curcumin. More than 35 years later, over 9000 studies on curcumin are recorded in Pubmed, the main database for (biomedical) scientific research.

How much curcumin does turmeric have?

Curcumin is one of the bioactive ingredients or phytochemicals found in turmeric.
Curcuminoids constitute around 2-6% of turmeric and it can be found in various species of Curcuma family. We are focusing on yellow turmeric or Curcuma longa.

It is true that whole turmeric or raw turmeric has a low concentration of curcumin but it has many other beneficial compounds that give the status of a miracle herb.

Also, some researchers state that the natural composition of curcumin in turmeric- that is its combination with other curcuminoids and turmeric oils aids in absorption of curcumin and potentiates its therapeutic effect.

What makes curcumin so special?

Despite improvement in technology and progress in healthcare, the prevalence of multigenic disorders in humans has not decreased significantly. Multigenic disorders are those which involve multiple biochemical signaling pathways.

In order to treat these diseases, control or regulation of one of the biochemical pathways is insufficient.

Also, drugs that target only a single biochemical pathway are expensive and have adverse effects.

Natural products or bioactives found in plants target multiple biochemical pathways and are inexpensive as well as safe. Curcumin is one such compound.

This ability of curcumin to affect multiple biochemical pathways is known as pleiotropicity.

Yes, curcumin is a pleotropic molecule- a single molecule that can interact with various enzymes and biochemical pathways. And it is one of the components that makes turmeric an all-in-one herb.

K.Indira Priyadarshini , one of the most important researchers of curcumin, describes how the structure of curcumin confers to it various pharmacological properties.

The phenolic OH groups are responsible for part of the antioxidant activity while the alpha, beta-unsaturated keto-enol structure is associated with an anti-tumor activity.

Curcumin interacts with various biomolecules and these interactions produce reversible as well as irreversible changes in its biological function.

Based on the understanding of the structure and its related properties, researchers have developed various derivatives of curcumin with enhanced function but none of them are as potent as curcumin in terms of its multi-targeting effect or pleiotropic effect.

Why is there so much discussion about the bioavailability of curcumin?

Curcumin in turmeric has poor bioavailability: it is poorly absorbed in the body and excreted from the body rapidly.

The major factors that affect the bioavailability of curcumin are


What can be done to improve bioavailability?

Apart from increasing the absorption, it also very important to note that curcumin also gets metabolized into various different compounds that are therapeutically active. Therefore despite low bioavailability, it still provides health benefits.

Difference between turmeric and curcumin: which should you take?

Oranges are a fruit and Vitamin C is its most abundant and important active constituent.
Onions are a vegetable and quercetin is one of its bioactive components that are important when it comes to health.
Similarly, turmeric is a herb and spice while curcumin is one of its bioactive constituents that has been proven by research to be therapeutically effective in many health conditions.

Apart from curcumin, turmeric has as many as 100 other bioactive compounds.
Also, the natural composition of curcumin with other bioactives makes it more absorbable in the body. Therefore we recommend dietary turmeric in almost all health conditions as well as daily health benefits.

This product contains approximately 77% (70-80%) curcumin, 17% demethoxycurcumin and 3% bisdemethoxycurcumin.
Why is it 95% curcumin and not 100% curcumin?
Raising the % of curcumin will not improve the potency or bioavailability in any way, but will raise the costs of production dramatically, making it far too expensive to be practically useful.

For general health improvement, it may suffice to stick to the spice turmeric and simply use it (almost) daily in your meals.

However, for certain conditions like cancer, benign tumors or major depressive disorder one may require high concentrations of curcumin which may not be possible from dietary turmeric.
The quantity of turmeric you would have to consume to get the same proportion would be higher than normal and may cause stomach upset.

Also in cases like kidney stones, gout or certain kidney diseases where potassium and oxalate intake need to be low then one may need to limit intake of turmeric as a spice and opt for curcumin supplements.

You can seek the help of an orthomolecular therapist regarding the dosage and formulation of curcumin that may suit your condition.

How safe is curcumin?

The American Food and Drug Association has approved curcumin as GRAS (generally recognized as safe). It is now incorporated in supplements, cosmetics, ointments, drinks, and food items.

In a specific study curcumin was assessed by giving people dosages as high as 12 grams a day for three days.
The only complaints that a minority experienced at very high dosages were diarrhea, headache, rash, and yellow stool.
In other studies with patients suffering from colon cancer or pancreatic cancer, the participants ingested up to 4g of curcumin a day for up to 4 months.
Nausea and diarrhea were the only adverse events noted, with a majority having the opinion that the amount of capsules they had to ingest to get to that amount was highly unpractical.

Curcumin is a safe and non-toxic compound and the only adverse events noted till date is gastric upset and related symptoms. These can be minimized by starting with a low dose of curcumin and increasing gradually.

Curcumin is naturally present in turmeric and turmeric powder can be included in the diet.

Turmeric is best taken with fats and/or black pepper to enhance the absorption.
You can also take Turmeric Tea and Turmeric Milk (also known as 'Golden' Milk/Tea). Curcumin is available in powder form or also as supplements.

However, it is a good idea to opt for supplements with an adjuvant for absorption such as bioperine or lipid (phospholipid or phosphatidylcholine).

BCM-95, Curcumin C3 complex, Longvida, Meriva, Theracurmin are few of the formulations of curcumin that are available. The dosage for each formulation differs; hence it is best to consult a therapist before taking curcumin supplements.

As mentioned previously, curcumin is safe but a few precautions need to be noted

Gastric distress. High doses of curcumin may upset the stomach and/or intestines. When this happens, reduce the dose of curcumin and increase more gradually again, to attain the desired dose. To reduce chances of gastric distress, consume curcumin supplements after a meal.

Anti-platelet activity. If you are taking a blood thinner or anticoagulant, consult a health practitioner before taking curcumin. To avoid bleeding risks, discontinue use of curcumin 2 weeks prior to any surgical procedure.

Drug interaction. Curcumin interferes in drug metabolism activity and hence it is advised not to take it at the same time as you take your medicine. It is best to take curcumin at least 3-4 hours before or after taking your medicine.

Curcumin is one of the bioactive compounds found in the herb and spice turmeric. Curcuminoids are other compounds that are related to curcumin and found naturally in turmeric.

Since over the last decade, curcumin has been actively researched upon and over 200 pharmacological properties of curcumin have been identified.

Curcumin has limited bioavailability but despite of that, it shows therapeutic activity by virtue of its metabolites.

Curcumin’s low bioavailability can be counteracted by adjuvants like bioperine.
The mechanism behind curcumin’s unique action to act on multiple biochemical targets is still not clearly identified by science but this property of curcumin makes it an attractive wholesome approach of treating and managing various health conditions.