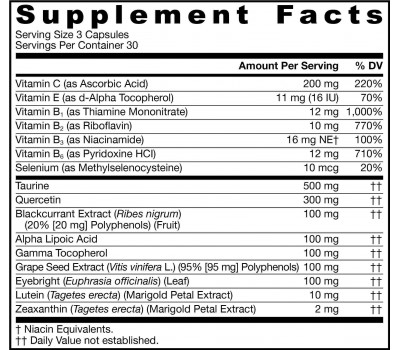 who benefits from Vision Optimizer?
Declining vision and eye health are often accepted as a product of old age or the unavoidable daily strain on the eyes. However there are multiple actions one can take to promote eye health.
Vision Optimizer is for those who wish to help protect their eyes from UV radiation, oxidation, deterioration and eye strain associated with modern life

background reading
Often described as the window to the soul, the eyes can also be an indicator of health. Circulatory deficiencies undetected in the body can sometimes be glimpsed through inspection of the eyes. Similarly, the antioxidant status of the aging body can affect eye health.

Considerable evidence suggests the importance of lutein in promoting lens health with aging. A study published in the British Medical Journal examined changes to lens’ opacity among 50,000 women over an eight-year period. The results clearly showed that the consumption of spinach, an excellent source of lutein, led to a much lower level of lens changes than did consumption of other vegetables, such as carrots, sweet potatoes and winter squash, which contain primarily beta-carotene and very little lutein. Research indicates that $2.5 billion in U.S. healthcare costs could be saved over five years if older adults received at least 6-10 mg of lutein daily.

Delphinidin-3-rutinoside appears to relax the ciliary smooth muscle of the eye. In nearsightedness, the ciliary smooth muscle cannot relax enough to allow focusing on distant objects. Cyanidin-3- rutinoside was found to assist in the regeneration of rhodopsin in frogs. Rhodopsin is the primary photopigment of rod cells enabling night vision and vision under low-light conditions in humans. There have also been two studies conducted in Japan that have suggested increased blood flow to the optic papilla and reduced susceptibility to eye fatigue and eye strain due to consumption of blackcurrant. Promoting eye endurance and protecting from eye strain can help computer-screen weary eyes.

Grape seed, ginkgo & botanicals
Both grape seed extract and ginkgo biloba extract are purported to enhance the circulatory health of the eyes. The oligomeric proanthocyanidins (OPC) in grape seed extract have been studied for their ability to promote capillary strength and integrity. They also improve recovery from glare, an important aspect of night vision that complements blackcurrant’s benefits.

Ginkgo biloba extract is often recommended for supporting memory, reaction time, circulation and protection against free radical damage; the last two are of great importance to the eyes. Its potential neuroprotective and microcirculatory actions may result from its flavonoid and terpenoid constituents acting in a complementary manner.

These nutrients are complemented by the flavonoids, quercetin, and the botanical eyebright (Euphrasia officinalis).
Quercetin is an antioxidant that protects lens architecture and helps neutralize sugar by-products that can damage the eyes.
Eyebright is a wild plant native to Europe. The name comes from its use as a traditional folk remedy for eye irritation and general disorders of the eyes. The herb’s tannins are thought to be the active ingredients.

Alpha Lipoic Acid, vitamins & minerals
As is true of the nerves, the eyes can be damaged by oxidative byproducts of sugar metabolism.
Vision Optimizer contains alphalipoic acid, selenium, vitamin C and two major forms of natural vitamin E (both alpha and gamma tocopherols) and vitamin B2 to help support the body’s glutathione antioxidant system that assists in protecting the eyes’ lenses.

Jarrow Formulas’ Vision Optimizer provides a comprehensive combination of nutrients that support various aspects of eye health, including protection from UV radiation and free radicals, support for critical eye components like the lens and photoreceptors and the promotion of healthy eye circulation.

code MPN:
VIS90-129003
brand
Brand or make of the product, sometimes the name of the manufacturer
:
Jarrow Formulas
best before:
July 2021
appearance:
audience

Here is a breakdown of the six reasons why eggs are such an awesome food choice
Read more
Pigmentation spots : why do we get them when we age?

Other common causes of skin discolorations are
Read more
LASIK eye surgery, is it safe?

In the past decade, LASIK eye surgery has boomed in popularity. It is easy to understand why: instead of wearing contacts or glasses, after surgery your eyes are corrected to result into (almost) perfect vision. However, sometimes we also hear horror stories: late 2016 Dutch television showed a program in which a house physician laments he's suffering from horrible neuralgic pains after having undergone laser surgery. Experts claim this is an extremely rare side effect from a specific type of LASIK surgery that nobody needs to worry about.
Read more
What to wear: a pair of glasses or contacts?

recommended use
Take 3 capsules per day with food, or as directed by your qualified health care consultant.

contra-indication
If you have a medical condition, (especially diabetes or coagulopathy), are pregnant or lactating, are under the age of 18, or are taking medications (especially glucose-control or blood thinning), consult your health care practitioner before using this product.