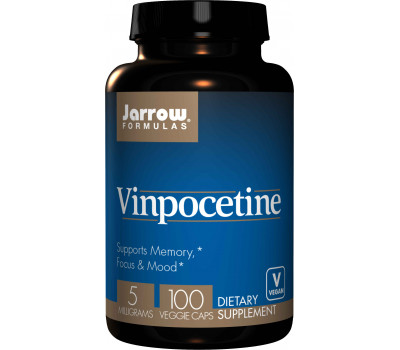 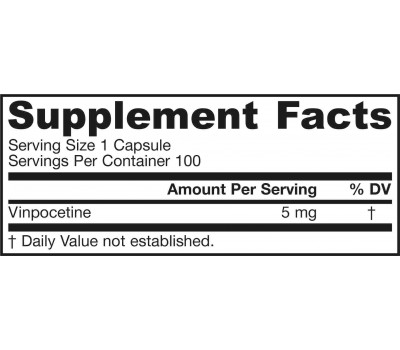 Jarrow Formulas Vinpocetine , the smart drug for improved memory recall, is a pscyhostimulant and nootropic, derived from tabersonine, an alkaloid extracted from Vinca minor. Vinpocetine supports cerebral blood flow and brain metabolism by increasing cerebral synthesis of ATP, the universal “currency” of energy.
Vinpocetine enhances brain metabolism by improving utilization of oxygen. Vinpocetine also increases the synthesis of several neurotransmitters that affect such critical brain functions as memory recall, focus and mood. These brain functions are dependent on enough energy and oxygen.

background reading
Powerful support for mental functioning
Jarrow Formulas Vinpocetine is an alkaloid derivative from voacanga seeds. Vinpocetine also can be derived from the related alkaloids found in the periwinkle flower and a few other plants. In Europe, periwinkle extracts have been employed in herbal preparations for nervousness and anxiety. Modern research indicates that vinpocetine supports cerebral metabolism in part by increasing the brain’s production of ATP (adenosine triphosphate), the most important source of readily accessible energy found in the body. The brain’s utilization of glucose (blood sugar) and oxygen is improved by vinpocetine.

Of special interest, not only to the elderly but also to students, is that vinpocetine increases neurotransmitter concentrations critical for learning/memory formation, recall, focus and mood. Vinpocetine selectively improves blood flow in arteries and capillaries in the head and neck areas. Blood flow, glucose availability and oxygen utilization are also improved in the eyes and the structures important for hearing.

Age-related mental decline
With advancing age, numerous factors may lead to declines in memory and cognition. The brain needs energy and oxygen, and must eliminate waste products. The decline in memory and mental acuity associated with aging reflects multiple factors.

• Basic building blocks for neurotransmitters are less available and less effi ciently used.
• Hormonal elements decline drastically by the sixth decade of life
• Deterioration of the vascular system affects blood supply to the brain
• Production of ATP diminishes over time
• Ability of blood to carry and release oxygen is subject to decline
• Metabolism of glucose for energy goes down

Neurotransmitters and memory
Vinpocetine influences many areas of brain chemistry and brain functioning. Its impact is greatest upon noradrenaline, principally active in the locus coeruleus (LC) area of the brain. Other primary neurotransmitters are dopamine, acetylcholine and serotonin. Dopamine is involved in reward-seeking behavior and memory associated with spatial tasks.
Acetylcholine is most responsible for memory. Serotonin, which regulates mood and sleep, helps control anxiety and depression.

Memory, however, depends upon many factors. Improved cerebral blood flow is a benefit that compounds such as vinpocetine and ginkgo biloba contribute to.

Not just for the elderly
Over 100 clinical trials performed with vinpocetine have involved mostly elderly subjects and focused on memory. However, several studies using younger, healthier volunteers have demonstrated enhanced short-term memory. Thus, vinpocetine may benefit students, who need to memorize large amounts of information in short periods of time.

Other possible uses
Reduced circulation, increased blood viscosity and membrane rigidity in red blood cells can lead to blood flow problems in the inner ear, which could affect hearing and balance.

Ever since Boris Johnson barely survived an infection with COVID-19, he embraced a healthier lifestyle. He doesn't just want to live healthier himself, but also wants the British people to eat and live healthier as well.
The question is, how? Over time, manufacturers of junkfood have mastered the game of tricking us into buying calorific foods while these foods are also attractive because we have evolved to enjoy that kind of foods.
Aside from financial incentives to make us buy less junkfood (sugar tax) and more healthy foods (by lowering VAT) the best bet seems to be a mix of methods that 'nudge' us into making better choices.
There have been countless behavioural science-based initiatives intended to nudge healthier eating. But which ones actually work, leading to a sustained behaviour change? And of those, which are most effective? What concepts, tools and styles of intervention are best at getting us to eat healthy foods, or less of the unhealthy foods...?
Read more
Skin hunger: why we crave touch

Today, plants are being used to treat a number of health concerns and conditions, including allergies, arthritis, migraines, fatigue, skin infections, wounds, burns, gastrointestinal issues and even cancer, proving that it’s true that food is medicine. These herbs are less expensive and they’re a safer means of treatment than conventional medications, which is why so many people are choosing to go back to this traditional idea of medicine.
Read more
The power of positive thinking

The power of positive thinking

Why is stress so hard on the body?

When we are stressed, our bodies produce higher levels of cortisol, a hormone that shuts down the thinking center of our brains and activates conflict aversion and protection behaviors. We become more reactive and sensitive. We often perceive even greater judgment and negativity than actually exists. And these effects can last for 26 hours or more, imprinting the interaction on our memories and magnifying the impact it has on our future behavior. Cortisol can be self-inforcing, the more we think about a stressful event, the bigger and longer the impact.

Positive comments produce a chemical reaction too. They spur the production of oxytocin, a feel-good hormone that elevates our ability to communicate, collaborate and trust others by activating networks in our prefrontal cortex. But oxytocin metabolizes more quickly than cortisol, so its effects are less dramatic and long-lasting.
In order to counterbalance the effect of stress, a much higher amount of positive events must happen, which in the real world, is not so easy to achieve.

So let's look at the factors that can help influence happiness!
Read more
Nootropics, what are they and how do they work?

Nootropics is the accepted term for substances that enhance learning and memory function.
Nootropics work in various ways depending on the characteristic of the substance.
Some work by enhancing oxygen transport to the brain, an improved energy turnover in the brain, better neurotransmitter availability, or enhancing the creation of other substances that influence brain activity.
Read more
Blood flow and vasodilation