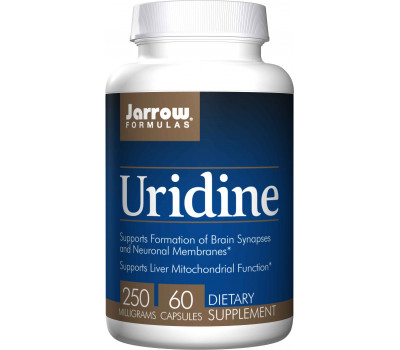 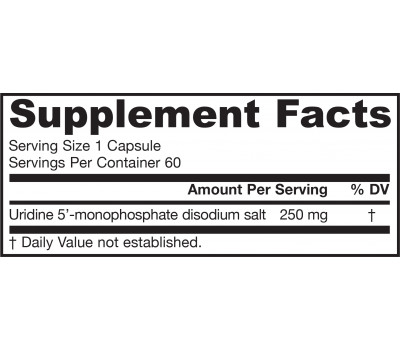 Uridine is a nucleotide that acts as a precursor of brain synapses and membrane phospholipids in conjunction with the omega-3 fatty acid docosahexaenoic acid (DHA) and choline sources. It may enhance some brain cholinergic functions.
Uridine also supports the health and function of liver mitochondria.

background reading
Uridine is a relatively unknown dietary supplement ingredient, yet it is found in a wide variety of foods. In fact, uridine is one of the reasons that fish is known as “brain food” and brewer’s yeast is recognized for its health benefits. Uridine, along with adenosine, guanosine, and cytidine, is one of the four nucleosides that comprise RNA.

Uridine has been found to have unique benefits beyond its role in RNA. For instance, it acts as a precursor to membrane phospholipids and signals changes in the composition and activity of brain cells.
In mitochondria, particularly in the liver, uridine is important as a fundamental precursor and regulating molecule.

Supports Brain Energy Utilization
There is a tendency to believe that the most important nutrients for the brain are those that are merely “building blocks” for neurotransmitters. L-tryptophan for serotonin is one example. But there is much more to the brain than just its neurotransmitters. Both brain energy management and neuronal membrane composition are also critical.

Bioenergetic defects and inadequacies play significant roles in brain neurochemistry. These defects can arise from a number of causes, including impaired mitochondrial function. Studies in human and animal models suggest that uridine can increase brain adenosine triphosphate (ATP) levels and enhance glycolytic energy production.
Likewise, uridine is important in an energy pathway utilized by brain cells to maintain ATP production under restricted oxygen conditions.
In vivo tests confirm that uridine enters the brain.

Beyond energy management, uridine sits in the middle of important nutrient cycles. One example is the Kennedy Cycle that is critical to generating and managing the components found in neuronal membranes. This involves biochemical pathways and interplay among uridine, choline, CDP-choline, phosphatidylcholine, and docosahexaenoic acid (DHA).
Uridine also has been found to have a direct signaling function in the brain. Uridine activates brain P2Y receptors, which control neuronal differentiation and synaptic protein synthesis. In fact, the omega-3 fatty acid docosahexaenoic acid (DHA) appears to work in concert with uridine in the brain.

Enhances Liver Mitochondrial Function
Uridine plays a role in preserving and enhancing hepatic mitochondrial function in the face of challenges, especially those caused by certain liver toxins. This has been particularly evident for substances that interfere with the replication of mitochondrial DNA (mtDNA). In a broader sense, research dating back more than a decade supports the role of uridine in liver detoxification and homeostasis.
There is an intrinsic link between pyrimidine metabolism –– which includes some nucleosides, such as uridine –– and the accumulation of fat in the liver. Liver lipid accumulation is correlated with obesity and diets high in fructose, occurrences not uncommon to modern humans, and is usually a strong indication of metabolic imbalance itself.
A recent paper suggests that uridine suppresses fat accumulation by modulating the acetylation profile of liver enzymes. Acetylation is one mechanism used by the body to alter enzymatic activity. In fact, uridine has been found to influence the nicotinamide adenine dinucleotide NAD+/NADH ratio—a critical metric of the health and energy state of the cell.
Evidence of mitochondrial and energetic implications found in the liver implies that uridine could play a larger role in the function of mitochondria throughout the body. This might pique the interest of athletes. An animal experiment has found that uridine may contribute to endurance exercise performance by altering metabolic parameters. This connection also suggests that other ingredients that impact mitochondria function and renewal, such as ubiquinol and pyrroloquinoline quinone (PQQ) as found in Jarrow Formulas’ QH-PQQ™ , may make for useful additions to regimens that include uridine.

Uridine is made with uridine 5’-monophosphate, a nucleoside phosphate that acts as a precursor to membrane phospholipids and signals changes in the composition and activity of brain cells. Uridine also supports the health and function of liver mitochondria.

recommended use
take 1 or 2 capsules per day or as directed by your qualified health care consultant.

storage
store in a cool, dry place but do not refrigerate
keep out of reach of young children

contra-indication
If you have a medical condition, are pregnant, lactating, trying to conceive, or taking medications, consult your healthcare professional before using this product.