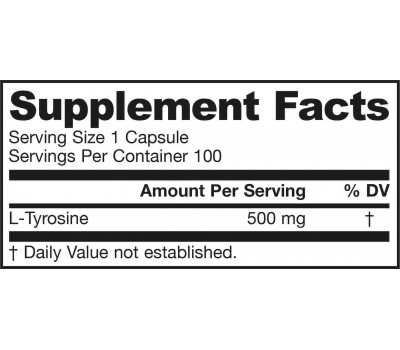 Jarrow Formulas L-Tyrosine 500 is utilized for the synthesis of catecholamine neurotransmitters, such as norepinephrine, epinephrine and dopamine of which the natural production decreases when being on a fat loss diet. In general, tyrosine increases arousal, focus and vitality when the body is under chronic or extreme stress.
Tyrosine is also involved in production of pigmants and cell surface receptors.
Tyrosine promotes robust cognitive function when under stress.

who benefits from using Tyrosine?
Tyrosine has anti-aging benefits for maintaining dopamine production as we grow older, thus improving cognitive and physical performance. It is also useful for those who want a boost in alertness and focus (can replace coffee in the morning) or who are under constant stress and want to maintain healthy hormone levels and mental alacity.

background reading
A powerful amino acid with many benefits
Tyrosine is an important precursor to thyroid and adrenocortical hormones as well as to the brain neurotransmitters dopamine, epinephrine and norepinephrine. In lieu of tyrosine intake from dietary sources, phenylalanine is utilized for its biosynthesis along with necessary cofactors iron, vitamin C and niacin. Since tyrosine can be made by the body it is not considered an “essential amino acid,” per se, but it is essential to the body’s proper functioning.

The thyroid hormones triiodothyronine (T3) and thyroxine (T4) are derived from tyrosine. Tyrosine readily passes the blood brain barrier however it competes with other amino acids for entry into the brain.
Tyrosine plays an important role in cell signaling by regulating many cellular processes via tyrosine kinase receptors (including sensitivity to insulin). Tyrosine is also the precursor to the pigment melanin, which is used by the body in UV radiation protection. There is also some recent evidence that suggests melanin may act as a powerful chelating agent in the body helping sequester toxic heavy metals.

Tyrosine content varies greatly in foods. In general, meats contain higher concentrations than vegetables or grains, with wheat germ being the exception to that rule. As a precursor for excitatory neurotransmitters, tyrosine is an important reserve in the body’s response to stressful conditions.
In studies performed at MIT, animals given extra tyrosine were better able to control stress and avoid depression; human trials with soldiers undergoing intense physical training bolstered these results.

Tyrosine and mood
Sadness and discouragement are natural responses to disappointment or loss. Nevertheless, in our modern society mood is often out of kilter due to diet and lifestyle imbalances.It is common for depressed people to have diets inadequate in vitamins, minerals and protein while being high in refined carbohydrates. Intake of excessive caffeine (about five cups of coffee) can also be associated with mood swings.

Tyrosine and brain metabolism
As we age, brain dopamine production declines. A marked deficiency of dopamine in the basal ganglia may result in uncoordinated movement, improper reflex responses, stiffness of gait and other motor problems. This may be due to decreased levels of antioxidant enzymes, resulting in toxic hydrogen peroxide accumulation that is produced during normal dopamine metabolism.
Elevated hydrogen peroxide brain levels may then accelerate destruction of the substantia nigra, a brain region in the basal ganglia responsible for dopamine production. Tyrosine may provide nutritional support in the brain’s response to falling dopamine levels.
Aside from assisting in coordination and tissue repair (by aiding growth hormone release), dopamine promotes the “pleasure” response to activities like eating and sex. One hypothesis posits that overeating may be due to poor dopamine production in the brain.

A few days ago, an article showed up in my newsfood about a remarkable result of research done on the Hadza tribe in Tanzania, which still leads a traditional hunter-gatherer lifestyle.
Despite walking an average of a multiple of ten thousands of steps every day, they barely need more calories than the average couch potato in a Western country.
That same day I discussed with an old friend who had read the same news story. He told me how he had trained for a marathon in the past, but barely dropped any weight while doing so. Only when he spent a week on liquid foods at a spa, he succeeded in losing weight which he mostly thanks to the relaxed environment. Otherwise it was next to impossible. Apparently his body really clung to its precious body fat!
But how was this possible? We didn't really know though we had our suspicions. I I could tell much about the same story. Yes, I'd drop weight pretty fast in the first few weeks of the cycling season or on a longer cycling holiday, but would get stuck at my regular (still too heavy) summer weight while I wasn't really inhaling tons of food. Except then for the Route des Cent Cols during which I could barely eat enough to stay fit and sleep well for all those mountains.
Let's find out more about this particular research!
When Herman Pontzer set off for the rugged savannah of Tanzania to spend a summer with the local Hadza people, he thought he knew what he would find. As an evolutionary biologist, his aim was to measure how the Hadza’s hunter-gatherer lifestyle causes them to burn more energy. Because we all know the more exercise you do, the more calories you burn and the slimmer you become, right? Well no, not exactly.
“Don’t expect any meaningful weight change in the long term from exercise alone.”
What Pontzer and his fellow researchers discovered flew in the face of received wisdom about how our metabolism works. Although the Hadza lead far more active lives than ours – routinely walking long distances, they undertake more physical activity daily than the typical American does in a week – their energy expenditure was no greater. They were burning the same number of calories as men and women from industrialised populations. Our bodies, concluded Pontzer, seem to maintain daily energy expenditure within a narrow window, no matter what lifestyle we lead. While obesity is largely caused by overconsumption, it appears there’s little we can do to change the calories we burn.
Read more
Feeling sad and stressed due to COVID-lockdown?

recommended use
Take 1 to 2 capsules per day, on an empty stomach, immediately after arising in the morning, preferably with juice as a carbohydrate source, or as directed by your qualified health care consultant.

contra-indications
If you have a medical condition (especially bipolar disorder or a history of malignant melanoma), are pregnant or lactating, are under the age of 18, or are taking medications (especially MAO inhibitors), consult your health care practitioner before using this product.