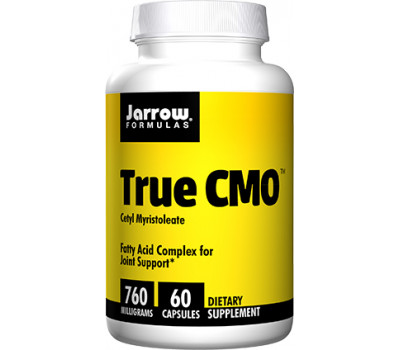 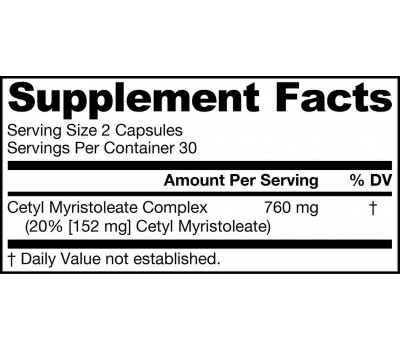 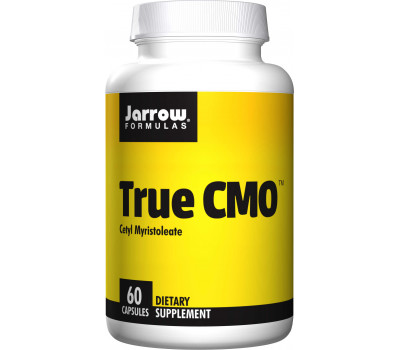 True CMO™ is a concentrated lipid extract from a natural bovine source that provides the fatty acid cerasomal-cis-9-cetyl myristoleate. CMO is not found in any vegetable source. CMO is found in low amounts in animal tissues.

A Promising Development in Joint Support
CMO ™ (cerasomal-cis-9-cetylmyristoleate) has been described by Time Magazine (October 28, 1996) as one of the most promising developments in joint health research at that time. Understandably, the promise that CMO may provide nutritional support for certain aspects of joint health generated enthusiasm because joint concerns are so widespread. Joint issues are amongst the most common health complaints. Indeed, the many different subcategories of joint issues concern an estimated 15% of the world’s population.

Harry Diehl, the discoverer of CMO, was a chemist at the National Institutes of Health (NIH) in the early 1970s when he first realized that there is a natural exception to the normal animal model of reaction to Freund’s Adjuvant, a research immunopotentiator composed of inactivated and dried mycobacteria. His work grew out of the observation that Swiss albino mice, unlike rats and other animals, do not develop certain types of joint problems. Dr. Diehl isolated the compound cetyl myristoleate from the Swiss albino mouse and showed that this compound is protective in a variety of laboratory animals when it is injected near the joints. (Journal of Pharmaceutical Sciences 83, 3:296-299, 1994) The implication of the laboratory findings is that CMO can play a peculiar and important role in joint health. A U.S. Patent, now expired, was issued in 1977 for the employment of cetyl myristoleate for joint health. A second U.S. Patent was issued in 1996 for the use of cetyl myristoleate for other aspects of joint nutrition.

The oily compound cetyl myristoleate was originally analyzed by Diehl to be cetyl (hexadecyl) alcohol and myristoleic (cis-9-tetradecenoic) acid; in other words, cetyl myristoleate is the hexadecyl ester of myristoleic acid, i.e., it is an ester of the unsaturated fatty acid known as cis-9-tetradecenoic acid. Because it is an ester with the sites that would be attacked by oxygen already occupied, CMO is very stable.

Joint Health and Immune Function
The joints are active sites of immune function as an aspect of normal repair. Poor nutrition, overuse of the joints, and other factors can cause macrophages to tip the balance between the always- present catabolic and anabolic processes in the joints in favor of the breakdown of cartilage. The actions of the immune cells are regulated, at least in part, by the memory T-cells. The memory T-cells help to direct the actions of the macrophages and determine if macrophages are to be reactive against various tissues. The best currently available explanation for the clinical results found with CMO is that this compound acts as an immunomodulator and corrects the signal error originating with certain memory T-cells. Once the signal of the memory T-cells has been adjusted, macrophage activity in the joints calms and normal repair is maintained. In this explanation, CMO acts as a support for normal immune-mediated repair processes. Nevertheless, some researchers have suggested that CMO may, in fact, operate through some other pathway.

Other types of immunomodulation may also be involved. An alternate explanation, one not mutually exclusive to that involving the memory T-cells, is that cetyl myristoleate stimulates the production of immunoglobulins and series 1 and 3 prostaglandins. The stimulation of this prostaglandin pathways would lead to many of the beneficial effects found with the ingestion of essential fatty acids, especially the omega-3 fatty acids, but in much less time and requiring very small relative dosages of CMO. Similarly, some have emphasized the “surfactant” or special lubricating qualities of CMO. They note that CMO itself, or through its actions upon other physiological pathways, seems to improve the lubrication of the joints.

CMO has undergone a number of successful clinical trials. In 1994, researchers of the San Diego Clinic first developed and tested an ester analog CMO (cerasomal-cis-9-cetylmyristoleate). Their success was reported at the December 1995 meeting of the National Medical Conference on Aging. No side effects have been observed during active trial periods nor in the follow-up periods. A number of items, however, appear to block the effects of cetyl myristoleate and its analog CMO. These include alcohol and the drug methotrexate/Rheumatrex.

The cetyl myristoleate and the CMO used in the clinical trials and sanctioned by the U.S. Patent holder are of bovine origin. At the present time, no vegetable-derived compounds have been found to be adequate sources of these active ingredients. This is the position of both Dr. Diehl and Dr. Len Sands, Director of the San Diego Clinic. If a product does not carry either the trade mark CMO™ or Dr. Diehl’s name, it is not true CMO or true cetyl myristoleate.
True CMO ™ should be used in conjunction with Jarrow Formulas ® Glucosamine Sulfate 500, MSM and JarroSil® to maximize results.
Supplementation with additional omega-3 fatty acids, may also improve results.

A few days ago, an article showed up in my newsfood about a remarkable result of research done on the Hadza tribe in Tanzania, which still leads a traditional hunter-gatherer lifestyle.
Despite walking an average of a multiple of ten thousands of steps every day, they barely need more calories than the average couch potato in a Western country.
That same day I discussed with an old friend who had read the same news story. He told me how he had trained for a marathon in the past, but barely dropped any weight while doing so. Only when he spent a week on liquid foods at a spa, he succeeded in losing weight which he mostly thanks to the relaxed environment. Otherwise it was next to impossible. Apparently his body really clung to its precious body fat!
But how was this possible? We didn't really know though we had our suspicions. I I could tell much about the same story. Yes, I'd drop weight pretty fast in the first few weeks of the cycling season or on a longer cycling holiday, but would get stuck at my regular (still too heavy) summer weight while I wasn't really inhaling tons of food. Except then for the Route des Cent Cols during which I could barely eat enough to stay fit and sleep well for all those mountains.
Let's find out more about this particular research!
When Herman Pontzer set off for the rugged savannah of Tanzania to spend a summer with the local Hadza people, he thought he knew what he would find. As an evolutionary biologist, his aim was to measure how the Hadza’s hunter-gatherer lifestyle causes them to burn more energy. Because we all know the more exercise you do, the more calories you burn and the slimmer you become, right? Well no, not exactly.
“Don’t expect any meaningful weight change in the long term from exercise alone.”
What Pontzer and his fellow researchers discovered flew in the face of received wisdom about how our metabolism works. Although the Hadza lead far more active lives than ours – routinely walking long distances, they undertake more physical activity daily than the typical American does in a week – their energy expenditure was no greater. They were burning the same number of calories as men and women from industrialised populations. Our bodies, concluded Pontzer, seem to maintain daily energy expenditure within a narrow window, no matter what lifestyle we lead. While obesity is largely caused by overconsumption, it appears there’s little we can do to change the calories we burn.
Read more
Plastics in our body: autoimmune disease linked to breast implants

Scientists are scrambling to understand the dose at which microplastics start to have noticeable health effects. Like air pollution or harmful construction materials, those who have more exposure or pre-existing conditions may be less able to tolerate plastic.
Read more
Why does skin wrinkle when we age?

Why does skin wrinkle when we age?

Normal healthy skin has a nice epidermis with a smooth outer layer that acts as a barrier to water and environmental injury. Skin colour and tone is even and unblemished. Components such as collagen that make the skin look firm and plump.
Elastin is what makes the skin elastic while glycosaminoglycans keep the skin hydrated. These three are all abundant when we are young.

So, what causes the skin to look wrinkled? That is a result of a combination of both intrinsic aging and extrinsic aging.
Read more
Why are we so much less flexible when we age?

recommended use
take 2 capsules up to 3 times per day with meals, or as directed by a qualified physiscian. Avoid ingestion of alcohol and refined foods during period of consumption.

vegetarians/vegans
is made from bovine source and contains gelatin