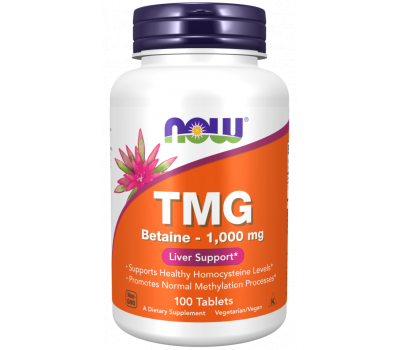 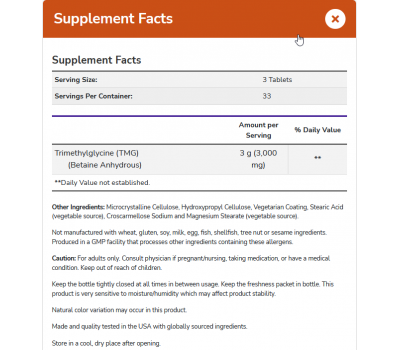 Methyl donors, such as TMG and folic acid, are required for converting homocysteine back into methionine and for the accurate synthesis of DNA and RNA, which is essential for the production of normal cells.
Methylation is inhibited by inadequately functioning key enzymes, excessive protein and fat intake, poor diet, inadequate intake of methyl groups, coffee, alcohol or by smoking. Impairment of methylation results in abnormal cell synthesis and elevated levels of homocysteine, a toxic amino acid and a serious health risk.

For athletes, TMG is interesting because it can increase the work capacity of fast twitch muscle fibers, resulting in an increased endurance capacity and a raised lactate threshold. TMG is also interesting for strength athletes who use creatine or citrulline supplements , because a methyl-group is needed for complete conversion.

background reading
What is homocysteine and why does it matter?
Homocysteine is sometimes called the “new cholesterol” because of its role in cardiovascular health. High blood levels of this compound are damaging in themselves but elevated readings may also be indicative of sluggish homocysteine metabolism. In addition, homocysteine levels are raised by such factors as poor diet, smoking, genetic predisposition and low levels of B vitamins (folic acid, B6, and B12).

The essential amino acid methionine, which comes only from the diet, is “used up” by the body to help donate a methyl group (CH3 - one carbon linked to three hydrogen atoms) to processes going on in every cell. These processes lead to the conversion of some of this methionine to homocysteine, and then into homocysteine thiolactone. This latter compound is a highly toxic metabolite or byproduct. The remethylation of homocysteine, with the help of folic acid, vitamin B12 and trimethylglycine (TMG), converts homocysteine back into methionine.

Methyl donors can improve the antioxidant status of the body indirectly by taking on some of the protective duties performed by antioxidants. However, methyl donors also add directly to the body’s antioxidant capacities by increasing the production of the antioxidant glutathione. With the help of vitamin B6, degradation of homocysteine provides precursor sulfur for the biosynthesis of taurine.

Aging and homocysteine levels and reduced methylation
Most of the conditions which are thought to be linked to sluggish homocysteine metabolism are, likewise, linked to the aging process.
The methylation pathway declines with age, and this decline leads to a loss of the detoxifi cation and repair operations which must be continuously renewed to maintain good health. For instance, methylation is perhaps the body’s most important built-in mechanism for protecting cellular DNA. Supplementation with methyl donors thus becomes one of the options which should be considered for maintaining sound health under conditions of stress and advancing years

Methylation for the liver and the brain
Methyl donors play a large role in the liver’s functions, in part because of their ability to support glutathione production for antioxidant protection and bile production for the disposal of toxins. Methyl donors, moreover, are amongst the classic lipotropics, substances which improve the ability of the liver to process fats and alcohol.

storage
store in a cool, dry place
keep out of reach of young children
keep the bottle tightly closed at all times in between usage with the freshness packet inside bottle as TMG is very sensitive to moisture/humidity which may affect product stability.

contra-indications
none reported
For adults only. Consult physician if pregnant/nursing, taking medication, or have a medical condition.