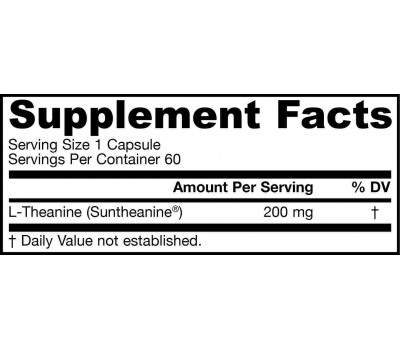 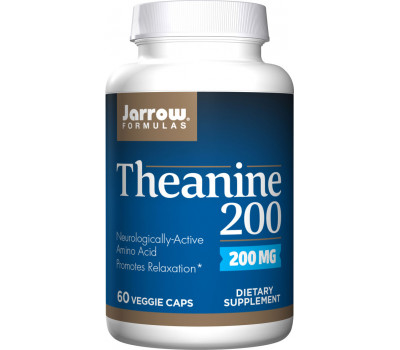 Jarrow Formulas Theanine 200mg is a unique amino acid found almost exclusively in green tea with beneficial effects on brain metabolism. Theanine induces relaxation without causing drowsiness, as measured by increased generation of alpha-waves.
Theanine may improve learning ability and sensations of pleasure by affecting dopamine and serotonin neurotransmitters in the brain. Also, Theanine has protective effects on the brain by antagonizing glutamate toxicity. This way it also improves quality of sleep, mood, heightens mental acuity and reduces negative side-effects of caffeine.

who can benefit from Theanine?
People with daily stress use this product largely to relax, or to improve sleep. It can also be used to help improve focus, promote liver health or counteract stimulants.

what distinguishes Theanine?
• each caspule provides the equivalent of 2-3 cups of tea
• enzymatically produced  SunTheanine which is identical to the theanine in green tea

how does each active ingredient function in Theanine?
• L-Theanine is a precursor for the production of neurotransmitters that serve health in numerous ways. It is especially useful as a relaxant without drowsiness.

Theanine is a rare amino acid  (chemical name gamma-ethylamino-L-glutamic acid) and is found only in certain species of tea plants. It constitutes 1-2% of the dry weight of tea leaves and accounts for about 50% of the free amino acids present in the leaves.
First discovered in 1949, L-theanine not only is an important health-giving constituent of tea, but also is the major flavor component of green tea.

The relaxation factor
Curiously, despite its caffeine content, certain teas tends to relax people without making them drowsy. Those engaging in meditation may drink tea to dispel mental sluggishness without becoming agitated, as is typical with excess coffee consumption. L-Theanine appears to be the component in green tea responsible for these benefits. This is good news for the 65% of American adults who suffer from daily stress.

In one experiment, 50 young female volunteers were divided into high-anxiety and low-anxiety groups. Each group was given 50-200 mg theanine in water once a week. Their brain waves were measured during the 60 minutes after ingestion. Measurements were repeated twice during a two-month test period. The results showed a marked increase in alpha waves starting roughly 40 minutes after ingestion. Researchers concluded that theanine rapidly enters the system when ingested, and heightens the brain wave linked to relaxed wakefulness. With regard to anxiety level in test subjects, those manifesting high anxiety showed a greater degree of brain wave change towards alpha.

This calming effect also translated to a significant alleviation of PMS symptoms. Women taking 200 mg L-theanine daily were shown to have a lower incidence of physical, mental, and social symptoms.

Improved learning
Animal studies were employed to determine if theanine exerts an impact upon memory and learning ability. In one memory experiment based upon learned avoidance, the theanine-treated animals were more successful than controls, and their advantage increased proportionally with the number of tests. In another test, which measured learning ability, theanine-treated animals out-performed controls, especially as the tests became more advanced.

Theanine achieves its benefits in the areas of relaxation and learning by affecting brain neurotransmitters. As a building block for the inhibitory neurotransmitter Gamma Amino Butyric Acid (GABA), theanine influences the release of two other neurotransmitters, dopamine and serotonin. Dopamine has many functions in the brain involving motor functions and general arousal. Temporary elevation of dopamine levels often leads to improved mood, alertness, libido, verbal fluency and creativity. Serotonin, another “feel-good” brain signal, plays an important role in regulating mood, emotion, sleep and appetite. Serotonin is also involved in learning, memory and other cognitive processes. Deficiency is associated with low mood, lack of will power, and poor appetite control.

Benefits for the liver and nerve health
Another animal trial with theanine looked at its effects upon liver health, using a known liver toxin, D-galactosamine. Theanine was shown to be active in preventing injury to the liver, whereas glutamine in equal amounts showed no protective effect. Studies using other models of liver injury also have demonstrated benefits. Recent research suggests that serotonin plays an important role in liver regeneration and acts as a mitogen (induces cell division) throughout the body.

Furthermore, theanine appears to protect against certain “excitotoxins.” For example, it reduces stimulation associated with caffeine, and inhibits some activities of norepinephrine in the central nervous system. In gerbils, theanine protected against ischemic delayed neuronal death, a condition where a rapid increase in glutamate results in nerve cell death

The power of positive thinking

Why is stress so hard on the body?

When we are stressed, our bodies produce higher levels of cortisol, a hormone that shuts down the thinking center of our brains and activates conflict aversion and protection behaviors. We become more reactive and sensitive. We often perceive even greater judgment and negativity than actually exists. And these effects can last for 26 hours or more, imprinting the interaction on our memories and magnifying the impact it has on our future behavior. Cortisol can be self-inforcing, the more we think about a stressful event, the bigger and longer the impact.

Positive comments produce a chemical reaction too. They spur the production of oxytocin, a feel-good hormone that elevates our ability to communicate, collaborate and trust others by activating networks in our prefrontal cortex. But oxytocin metabolizes more quickly than cortisol, so its effects are less dramatic and long-lasting.
In order to counterbalance the effect of stress, a much higher amount of positive events must happen, which in the real world, is not so easy to achieve.

So let's look at the factors that can help influence happiness!
Read more
Nootropics, what are they and how do they work?

Nootropics is the accepted term for substances that enhance learning and memory function.
Nootropics work in various ways depending on the characteristic of the substance.
Some work by enhancing oxygen transport to the brain, an improved energy turnover in the brain, better neurotransmitter availability, or enhancing the creation of other substances that influence brain activity.
Read more
What are brain waves?

What are brain waves?

While reading just a single sentence, you will have experienced thousands of brain waves. These waves of electricity flow around our brains every second of the day, allowing neurons to communicate while we walk, talk, think and feel.
Read more
Declutter your life and feel liberated!

Declutter your life and feel liberated!

Have you ever looked around in your house upon coming home with a new purchase, to discover you can't find a suitable spot to put it away? Your new fancy mug can't be put up in the cupboard, because it is chockful of mugs and lovely tea cups already. Your new fancy dress can't be hung in the wardrobe as ther's no space left. Sounds familiar, huh?
Read more
Winning the rat race

Even though some might not admit it freely but just about everyone is taking part of the rat race. It might be your job or just the mere fact you try to keep yourself afloat by paying off your or loans, making sure you don't end up eating from soup kitchens or worse, 'sleeping with fishes' like Luca Brasi. Even 'keeping up with the Joneses' can be stressful.
Read more
Coping with stress

We live in interesting times where stress is accumulating in almost everyone's life due to the world-wide financial crisis wrecking havoc on both national and personal financial security. Even when that does not affect us, there will be stress due to time management problems while having to balance our private and professional life.
Read more

recommended use
Take 1 capsuleper day with water or juice on an empty stomach, or as directed by your qualified health care consultant.