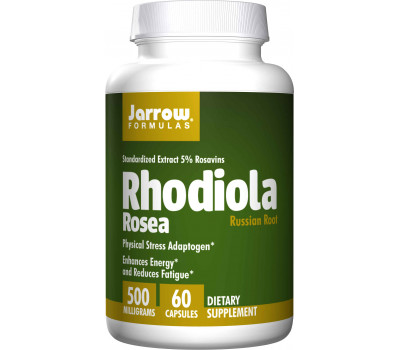 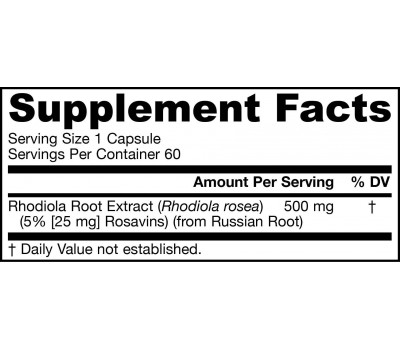 Discontinued, we invite you to buy another rhodiola product, among which Rhodiola-LF

Jarrow formulas Rhodiola extract is made from a gold-colored root found in the mountainous regions of Eastern Siberia, which is why it is frequently also called Siberian ginseng. Rhodiola is an adaptogenic herb that has been used for centuries and validated for its beneficial effects on energy production and reduction of fatigue. Though there are greater than 20 species of Rhodiola, only authentic Rhodiola rosea contains Rosavins. The term Rosavins refers to the three active compounds: rosavin, rosin, and rosarin; salidroside is not a useful marker for Rhodiola rosea.

who can benefit from Rhodiola rosea?
Rhodiola is ideal for both men and women seeking to increase both physical and cognitive energy levels and endurance, and to promote a healthy mood.

Rhodiola rosea boasts robust evidence from both traditional and clinical sources for its benefits in enhancing energy levels and reducing occasional physical and cognitive fatigue. Though there are more than 20 species of Rhodiola, only Rhodiola rosea contains the three active compounds which work synergistically to best promote endurance and increased energy levels. Jarrow Formulas’ Rhodiola extract contains rosavin, shown to help promote a healthy mood; as well as rosin, and rosarin. Standardized to contain a minimum of 5% rosavins, Jarrow Formulas’ Rhodiola Rosea offers a unique, high potency Rhodiola supplement.

A Broad-Spectrum Stress Solution
Grown in the mountainous regions of Europe, Rhodiola rosea has been studied and used for hundreds of years for its performance-enhancing capabilities in healthy populations, as well as its therapeutic properties. Russian researchers first noted Rhodiola’s adaptogenic qualities which allow it to support increased resistance to chemical, biological and physical stressors. A variety of studies have since shown that Rhodiola rosea supports nervous and cardiovascular health, promotes normal neurotransmitter and hypothalamic-pituitary-adrenal axis function, as well as positive mood, optimal energy levels and even longevity. It also possesses an impressive safety profile, making it an attractive choice for managing the effects of various stressors.

Enhances energy levels
Rhodiola rosea works on a cellular level to activate the synthesis or re-synthesis of ATP in mitochondria and stimulate reparative energy processes after intense activity, reducing physical fatigue and improving performance and endurance. In one animal study, a dose of 50 mg/kg of oral Rhodiola rosea improved swimming capacity by 24.6% more than Rhodiola crenulata. In a later study, long-term supplementation of Rhodiola rosea significantly reduced fatigue after intense swimming by increasing glycogen content, the energy supply of lipogenic enzyme expressions, and the protective defense mechanisms in Wistar rats. A 2013 study also found Rhodiola roseato support the cardiovascular response to submaximal exercise and to improve endurance and exercise performance by decreasing the perception of effort.

Reduces occasional physical and mental fatigue
Rhodiola rosea is also well known for its ability to modulate physical and mental fatigue caused by short term exertion, and to support cognitive health. A double-blind, placebo-controlled randomized study of 24 participants looked at the effect of Rhodiola roseaon physical capacity, muscle strength, speed of limb movement, eaction time, and attention in an experimental setting. It was found to increase time to exhaustion, VO2 (a measure of oxygen uptake) and VCO2 (a measure of carbon dioxide output) peaks, and improve pulmonary ventilation in a short span of just 4 weeks. Rhodiola also has been found to modulate stress-induced mental fatigue. In a study of 56 physicians, a statistically significant improvement in perceptive and cognitive cerebral health were seen both before and after night shifts over three periods of two weeks. In another randomized, double-blind, placebo-controlled study, pre-versus post-treatment cortisol responses to awakening stress were found to be significantly improved in the Rhodiola rosea group compared with controls.

Supports Mood
Other research highlights positive findings on Rhodiola’s influence on mood. A randomized double-blind placebo-controlled, 6 week study with parallel groups found improved mood and emotional stability when subjects were given dosages of either 340 or 680 mg/day of Rhodiola over a 6-week period. A systematic review also found Rhodiola to significantly promote a positive mood compared to placebo.

A few days ago, an article showed up in my newsfood about a remarkable result of research done on the Hadza tribe in Tanzania, which still leads a traditional hunter-gatherer lifestyle.
Despite walking an average of a multiple of ten thousands of steps every day, they barely need more calories than the average couch potato in a Western country.
That same day I discussed with an old friend who had read the same news story. He told me how he had trained for a marathon in the past, but barely dropped any weight while doing so. Only when he spent a week on liquid foods at a spa, he succeeded in losing weight which he mostly thanks to the relaxed environment. Otherwise it was next to impossible. Apparently his body really clung to its precious body fat!
But how was this possible? We didn't really know though we had our suspicions. I I could tell much about the same story. Yes, I'd drop weight pretty fast in the first few weeks of the cycling season or on a longer cycling holiday, but would get stuck at my regular (still too heavy) summer weight while I wasn't really inhaling tons of food. Except then for the Route des Cent Cols during which I could barely eat enough to stay fit and sleep well for all those mountains.
Let's find out more about this particular research!
When Herman Pontzer set off for the rugged savannah of Tanzania to spend a summer with the local Hadza people, he thought he knew what he would find. As an evolutionary biologist, his aim was to measure how the Hadza’s hunter-gatherer lifestyle causes them to burn more energy. Because we all know the more exercise you do, the more calories you burn and the slimmer you become, right? Well no, not exactly.
“Don’t expect any meaningful weight change in the long term from exercise alone.”
What Pontzer and his fellow researchers discovered flew in the face of received wisdom about how our metabolism works. Although the Hadza lead far more active lives than ours – routinely walking long distances, they undertake more physical activity daily than the typical American does in a week – their energy expenditure was no greater. They were burning the same number of calories as men and women from industrialised populations. Our bodies, concluded Pontzer, seem to maintain daily energy expenditure within a narrow window, no matter what lifestyle we lead. While obesity is largely caused by overconsumption, it appears there’s little we can do to change the calories we burn.
Read more
Feeling sad and stressed due to COVID-lockdown?

Today, plants are being used to treat a number of health concerns and conditions, including allergies, arthritis, migraines, fatigue, skin infections, wounds, burns, gastrointestinal issues and even cancer, proving that it’s true that food is medicine. These herbs are less expensive and they’re a safer means of treatment than conventional medications, which is why so many people are choosing to go back to this traditional idea of medicine.
Read more
How did menstruation become a taboo word?

How did menstruation become a taboo word?

Why don’t we call menstruation by its name but use expressions like 'auntie Flo comes for a visit'? Euphemisms serve a purpose. They give us words to talk about things that are considered culturally taboo.

Menstruation stigma is a form of misogyny. Negative taboos condition us to understand menstrual function as something to be hidden, something shameful. And by not naming a thing, we reinforce the idea that the thing should not be named.

Menstrual euphemisms and taboos are old. But not all societies view menstruation negatively.
Menstrual taboos are found in the holy books like the Quran or the Bible"

“…in her menstrual impurity; she is unclean… whoever touches…shall be unclean and shall wash his clothes and bathe in water and be unclean until evening” Leviticus 15

Taboos on menstruation may have existed before agriculture started or even before languages fully evolved.

Read more
Nootropics, what are they and how do they work?

Nootropics is the accepted term for substances that enhance learning and memory function.
Nootropics work in various ways depending on the characteristic of the substance.
Some work by enhancing oxygen transport to the brain, an improved energy turnover in the brain, better neurotransmitter availability, or enhancing the creation of other substances that influence brain activity.
Read more

recommended use
Take 1 capsule per day with a meal, or as directed by your qualified health care consultant.
DO NOT use during pregnancy and lactation. Individuals with anxiety, manic or bipolar disorders should not use Rhodiola.

contra-indication
If you have a medical condition (especially anxiety or manic/bipolar disorders), are pregnant, lactating, trying to conceive, under the age of 18, or taking medications, consult your health care practitioner before using this product.