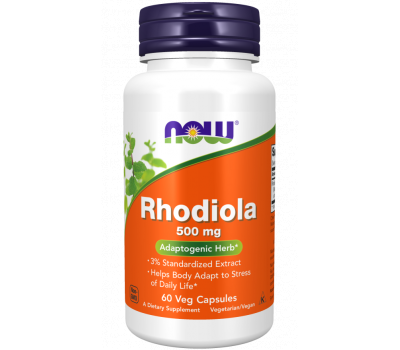 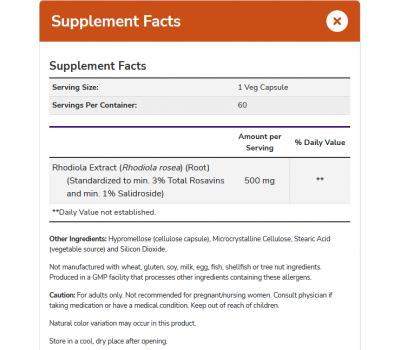 Rhodiola (Rhodiola rosea) is indigenous to the Arctic and Alpine regions of Europe, Asia and America and has long been used as a tonic by many cultures, including the Ancient Greeks. Rhodiola is generally known as an “adaptogen,” a term which refers to any agent possessing the ability to support the body’s natural capacity to adapt to life’s changing conditions.* NOW® Rhodiola is standardized to 3% total rosavins and 1% salidroside.

who can benefit from Rhodiola?
Rhodiola is ideal for both men and women seeking to increase both physical and cognitive energy levels and endurance, and to promote a healthy mood.

Rhodiola rosea boasts robust evidence from both traditional and clinical sources for its benefits in enhancing energy levels and reducing occasional physical and cognitive fatigue. Though there are more than 20 species of Rhodiola, only Rhodiola rosea contains the three active compounds which work synergistically to best promote endurance and increased energy levels. Jarrow Formulas’ Rhodiola extract contains rosavin, shown to help promote a healthy mood; as well as rosin, and rosarin. Standardized to contain a minimum of 5% rosavins, Jarrow Formulas’ Rhodiola Rosea offers a unique, high potency Rhodiola supplement.

A broad-spectrum stress solution
Grown in the mountainous regions of Europe, Rhodiola rosea has been studied and used for hundreds of years for its performance-enhancing capabilities in healthy populations, as well as its therapeutic properties. Russian researchers first noted Rhodiola’s adaptogenic qualities which allow it to support increased resistance to chemical, biological and physical stressors. A variety of studies have since shown that Rhodiola rosea supports nervous and cardiovascular health, promotes normal neurotransmitter and hypothalamic-pituitary-adrenal axis function, as well as positive mood, optimal energy levels and even longevity. It also possesses an impressive safety profile, making it an attractive choice for managing the effects of various stressors.

Enhances energy levels
Rhodiola rosea works on a cellular level to activate the synthesis or re-synthesis of ATP in mitochondria and stimulate reparative energy processes after intense activity, reducing physical fatigue and improving performance and endurance. In one animal study, a dose of 50 mg/kg of oral Rhodiola rosea improved swimming capacity by 24.6% more than Rhodiola crenulata. In a later study, long-term supplementation of Rhodiola rosea significantly reduced fatigue after intense swimming by increasing glycogen content, the energy supply of lipogenic enzyme expressions, and the protective defense mechanisms in Wistar rats. A 2013 study also found Rhodiola roseato support the cardiovascular response to submaximal exercise and to improve endurance and exercise performance by decreasing the perception of effort.

Reduces occasional physical and mental fatigue
Rhodiola rosea is also well known for its ability to modulate physical and mental fatigue caused by short term exertion, and to support cognitive health. A double-blind, placebo-controlled randomized study of 24 participants looked at the effect of Rhodiola roseaon physical capacity, muscle strength, speed of limb movement, eaction time, and attention in an experimental setting. It was found to increase time to exhaustion, VO2 (a measure of oxygen uptake) and VCO2 (a measure of carbon dioxide output) peaks, and improve pulmonary ventilation in a short span of just 4 weeks. Rhodiola also has been found to modulate stress-induced mental fatigue. In a study of 56 physicians, a statistically significant improvement in perceptive and cognitive cerebral health were seen both before and after night shifts over three periods of two weeks. In another randomized, double-blind, placebo-controlled study, pre-versus post-treatment cortisol responses to awakening stress were found to be significantly improved in the Rhodiola rosea group compared with controls.

Supports mood
Other research highlights positive findings on Rhodiola’s influence on mood. A randomized double-blind placebo-controlled, 6 week study with parallel groups found improved mood and emotional stability when subjects were given dosages of either 340 or 680 mg/day of Rhodiola over a 6-week period. A systematic review also found Rhodiola to significantly promote a positive mood compared to placebo.

Rhodiola Rosea serves as a powerful nutraceutical backbone when it comes to optimizing mental and physical energy levels and combating occasional fatigue.

contra-indication
For adults only. Not recommended for pregnant/nursing women. Consult physician if taking medication or have a medical condition.