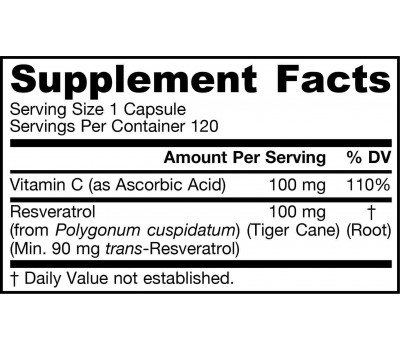 Jarrow Formulas Resveratrol 100
Resveratrol has been a hot supplement since this polyphenol, a chemical found in grapes and plants, has shown promise in several studies published in Nature (2004 - 2006). From a ingredient that might prolong life in man as it does with mice. Other studies showing promise as a potential new drug to treat or reverse diabetes. Findings that warrant more research. Even in cosmetic application holds promise, whether as a supplement for firm and healthy slender looking legs but also perhaps as a topical dermal hydrating creme.

Resveratrol 100 has an Oxygen Radical Absorbance Capacity (ORAC value) of over 3000 per capsule. As an antioxidant, resveratrol may protect cardiovascular function by inhibiting LDL oxidation, upregulating nitric oxide synthesis, and protecting the integrity of capillaries. Resveratrol has also been studied for its ability to activate Phase 2 detoxification enzymes and to maintain healthy cell replication.

Resveratrol: Fruit of the Vine
Although ethanol (alcohol) in small amounts can increase HDL, or “good” cholesterol, the primary heart-protective effect of wine comes from pigments in the skin of dark grapes. Red wine is particularly rich in such pigments, which are liberated during fermentation. The most scientifically supported and celebrated of the compounds is resveratrol (3,4,5-trihydroxystilbene). The compound evolved in grapes to combat disease, especially fungal attack. As evidence, treatment with fungicides dramatically reduces resveratrol production by the grape. Processing to reduce the astringent tannin content of wines, as performed commercially at large vintners, can also unfortunately reduce wine’s protective effect.

Populations that regularly consume red wine are noted for longevity and general good health. Indeed, red wine consumption and superior health is prevalent in much of Mediterranean Europe. This health-promoting effect may help explain the “French Paradox:” the French have been observed to consume large amounts of saturated fats and yet exhibit low rates of heart disease.

Jarrow Formulas Resveratrol has been extracted from the root of the Chinese herb Huzhang (Polygonum cuspidatum).
Vitamin C is added to these to support collagen production. These compounds are powerful antioxidants in their own right.

Resveratrol displays a neutralizing effect on environmental toxins.
Environmental contaminants such as dioxin, found at high levels in cigarette smoke and in many other sources of air pollution, have been linked to osteoporosis and periodontal disease. How this occurs is not completely understood. Yet resveratrol has proven to be an antagonist to these pollutants, suggesting that it may be protective against toxins now common in the environment.

Cardiovascular Protection
The cardioprotective effect of wine is normally attributed to its antioxidants. Investigations have shown that resveratrol plays a significant role in cardioprotection.

Many scientists have studied the mechanisms by which polyphenolic compounds protect the cardiovascular system. Such protection is attributed in part to their ability to directly scavenge peroxyl and hydroxyl radicals and to reduce oxidative stress. These actions, among other things, protect LDL (“bad” cholesterol) oxidation, which contributes to cardiovascular disease. Resveratrol was proven more effective than flavonoids in chelating copper ions – generators of free radicals – and less effective as a free-radical scavenger than some other grape components. Besides inhibiting LDL oxidation, exposure to wine/resveratrol appears to modulate vascular cell functions and protect against blood clotting.

Ever since Boris Johnson barely survived an infection with COVID-19, he embraced a healthier lifestyle. He doesn't just want to live healthier himself, but also wants the British people to eat and live healthier as well.
The question is, how? Over time, manufacturers of junkfood have mastered the game of tricking us into buying calorific foods while these foods are also attractive because we have evolved to enjoy that kind of foods.
Aside from financial incentives to make us buy less junkfood (sugar tax) and more healthy foods (by lowering VAT) the best bet seems to be a mix of methods that 'nudge' us into making better choices.
There have been countless behavioural science-based initiatives intended to nudge healthier eating. But which ones actually work, leading to a sustained behaviour change? And of those, which are most effective? What concepts, tools and styles of intervention are best at getting us to eat healthy foods, or less of the unhealthy foods...?
Read more
Zinc and HCQ

Valves in your veins are supposed to work harmoniously to move blood in one direction, to the heart!
If your heart is weak, or your valves stop working, or your veins lose collagen and become weakened, then the blood stays in your legs and feet longer than it should. It pools faster if you’re standing for a long time or if you’re sitting for a long time like during a long plane flight. The pressure inside your veins makes them wider and after a while, micro amounts of blood leak out into the surrounding tissue.
Varicose veins form, that is what you see when you look at your legs and see those twisted, distended big blue veins. It causes venous insufficiency. You are not the only one suffering: a large amount of especially elderly people and those who have to stand for a long time in their jobs, have varicose veins. They mostly impact the legs and feet.
Read more