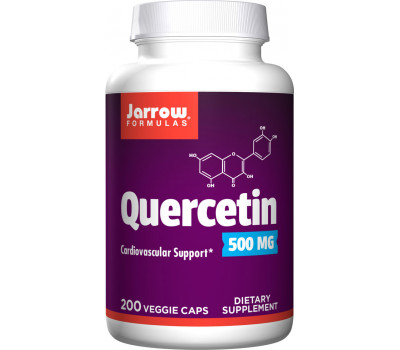 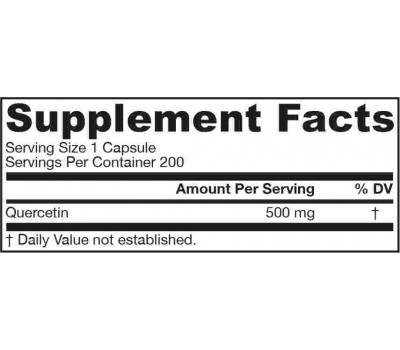 Jarrow Formulas Quercetin 500mg 200 capsules is a flavonol (a subclass of flavonoids) and is a potent antioxidant, providing cardiovascular protection by reducing oxidation of LDL cholesterol. Quercetin is one half of the rutin molecule, another flavonol, and is the more active antioxidant.

Flavonoids, including quercetin, occur naturally in fruits, vegetables, nuts, seeds, flowers and bark. Scientific evidence has shown quercetin to scavenge free radicals as well as to inhibit oxidation and cytotoxicity of LDL cholesterol.

Quercetin is a plant flavonoid with histamine modulating properties. A great deal of evidence supports the modulatory action of flavonoids like quercetin on mast cells and associated immune factors. Many believe quercetin to be the most effective of these flavonoids in preventing and improving an over-reacting immune system caused by seasonal stimuli like hayfever. In one Japanese study of mast cells from the nasal lining of individuals who were experiencing seasonal challenges, quercetin significantly attenuated histamine release.

Quercetin is a plant-source flavonol often found attached to sugars in fruits, vegetables, and other botanicals such as onions, shallots, apples, berries, grapes, capers and tea. In plants, quercetin influences the behavior of auxins, or growth regulators, allowing plants to adapt to their environment. Quercetin compounds may also aid in the protection of the plant from UV radiation and contribute to flower pigmentation via fluorescence-induced tautomerism.

Quercetin, in its many forms, has been attributed a number of health effects in humans. As such, quercetin levels in produce have been used as a relevant metric to demonstrate differences between organically and conventionally grown fruits and vegetables. For example, one study found that organically grown tomatoes averaged 80% higher levels of quercetin than other tomatoes. Such evidence lends support to the idea that fruits and vegetables can vary well beyond what the eye can see.

Quercetin and Human Health
Discussion about quercetin and health must start with oxidative protection, since that is the rationale often touted for taking quercetin. In vitro studies indicate that quercetin clearly possesses antioxidant activity and helps protect LDL from oxidation. Yet, in vivo studies have often had mixed results demonstrating antioxidative effects in the body—variation that is likely related to the bioavailability of quercetin in its various forms.

As with most substances that are termed “antioxidants,” one must look at more specific activity to understand the true health benefits of quercetin, as it is often the combined effect of various specific actions that lead to overall benefit. Quercetin, for instance, has been shown to modulate tyrosine kinase, the synthesis of nitric oxide, and the actions of NF-kappa-beta, concerted activity that assuredly has wide-ranging effects on the body that are not yet completely understood.

Nevertheless, epidemiological evidence has long supported an association between an increased dietary intake of flavonoids and cardiovascular protection. Recently, a supplementation trial with quercetin has done so. For quercetin, many researchers contend that the link involves not only protection against peroxidation of blood lipids but also regulation of monocyte attachment to vascular endothelial cells. Together, such mechanisms could undergird findings that quercetin promotes healthy blood pressure and other cardiovascular effects. Interestingly, at least one study has found that quercetin benefits can depend upon genetic variation of apolipoprotein E alleles.

In relation to blood sugar, quercetin modulates the action of aldose reductase. This enzyme is involved in the conversion of blood sugar (glucose) to sorbitol and is excessively active when blood sugar concentrations are high. The accumulation of sorbitol in the nerves of peripheral tissues is associated with poor nerve function. Similarly, sorbitol can accumulate in the lens of the eye. In lens tissue, sorbitol is not metabolized because the degradation enzyme (polyol dehydrogenase) is non-existent. And since lens tissues aren’t serviced by blood-flow, it is very difficult for the lens to rid itself of sorbitol once it accumulates. As a result, sorbitol build-up can lead to poor eye health.

Bioavailability
As mentioned above, the benefits of quercetin in humans may hinge upon its bioavailability. Past data has suggested that quercetin attached to a sugar molecule, especially glucose in the 4-position as is prevalent in onions, supports uptake in the digestive tract. It’s been conjectured that this may be because of increased water-solubility or possibly specific, active transport mechanisms in the intestines. Other data indicates that ingested quercetin sugar-conjugates are first cleaved to form quercetin aglycone before absorption and that the aglycone may be more bioavailable than sugar-conjugates. From a passive diffusion standpoint, the second idea appears reasonable, since the aglycone is more lipophilic and should more readily pass into intestinal enterocytes. This is perhaps one reason why it has been found that quercetin in oil is more bioavailable than in water.

Jarrow Formulas’ Quercetin contains quercetin (aglycone) a flavonol that is an effective antioxidant, providing cardiovascular support by protecting LDL from oxidation. Quercetin is one half of the rutin molecule, another flavonol, and is the more active antioxidant.

recommended use
Take 1 or more capsules per day with meals, or as directed by your qualified health care consultant.

contra-indication
Quercetine interacts with drugs and other food ingredients

Quercetine and antibiotics should not be combined since quercetine will reduce the effect of antibiotics
However quercetine enhances the absorption of curcumine, kaempferol and resveratrol, which makes them effective for therapeutic use at lower doses than is normally advised

safety
Quercetine is safe, even in higher than normal everyday doses, except when quercetine is combined with medication like pain killers, hormonal preparations like BCPs , blood thinners, heart medication and anti-depressants