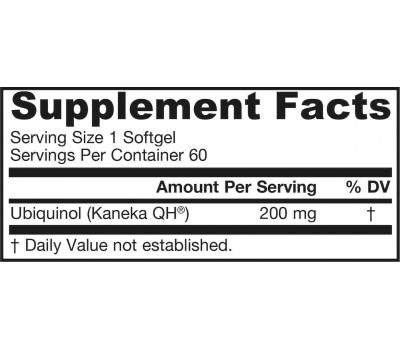 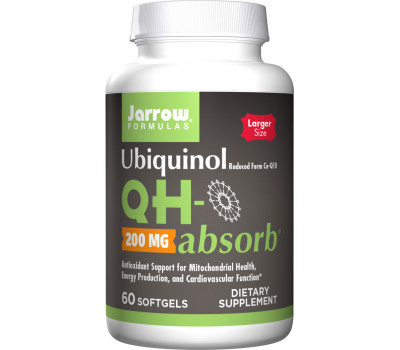 Jarrow Formulas QH-absorb 200mg 60softgels
Ubiquinol is the reduced (active antioxidant) state of Co-Q10, the form which is directly used in human metabolism as a lipid-soluble antioxidant. While standard Co-Q10 (ubiquinone) supplements can be activated in the body, this activation can be less efficient in some individuals, based on age, genetics, blood sugar status or level of oxidative stress.

QH-absorb 200mg is in an enhanced stability formula that utilizes the Q-absorb® natural proliposome lipid-soluble delivery system, which has been clinically shown in humans to increase Co-Q10 levels up to 400% (3.2x) over baseline and is 3-4 times better absorbed than chewable Co-Q10 tablets.
Ubiquinol is derived from Co-Q10 that is manufactured by means of a yeast-fermentation process and consists only of the natural trans configuration, the same as is biosynthesized in the human body. Jarrow FORMULAS supports clinical research on Coenzyme Q10.

The true danger of COVID-19 vaccines : why we should avoid leaky vaccines

Two weeks ago I wrote in my blog on how I did not want a vaccine out of madness because governments won't allow the use of HCQ or ivermectin, both of which are both safe and cheap treatments against COVID-19.
However, I said to not see anything wrong in the vaccine itself. By now I've changed my mind. No, I don't actually deem mRNA vaccines to be unsafe, nor am I too worried about the very rare side-effects of clotting.

What truly spooked me is the fact these are 'leaky' vaccines, which allows viruses to still infect people despite being vaccinated. They just won't get sick, but can become hosts of viruses that may still infect unvaccinated people. Who , in the end no longer will have any other choice but to get vaccinated when a virus has mutated into a too dangerous variant.

At least this is the theory from dr Geert Vanden Bossche, a prominent virologist who spoke out against massive vaccination.

Why is the fact those vaccines are leaky so scary? Let me explain with an article on Marek's disease in chickens.
Read more
Set point and holiday weight gain

At the time of writing this article the first week of advent has almost finished. In this week most people will have started decorating their homes for the holiday season that is upon us.

Though for most this period may not be as festive as it normally is, since it is not allowed to organize large gatherings because of COVID-19, we can still try to make the most of it and indulge in the small pleasures of life.
Quite a lot of people that are trying to become fit and trim worry about the holiday season and what damage it will do to their progress: how can they avoid weight gain during those days?
We can reassure the worryworts: you will be fine to indulge on those special days. With emphasis on 'special' days as nothing spectacular will happen when you eat normal on the other days. The bigger problem is when you spread out those days over an extended period of say two to three weeks.
But even with a longer period of dietary negligence, most people notice it is surprisingly easy to get rid of the extra holiday weight, due to a wonderful (and scary) phenomenon called 'set point'.
Read more
Heart disease: what are the differences between men and women?

Read more
What is co-enzyme Q10 and why is it important for our health?

recommended use
take 1 softgel per day with a meal, or as directed by your qualified health care consultant.