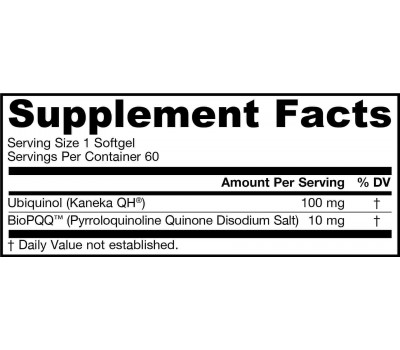 Jarrow QH 100mg +PQQ 10mg 60 softgels is the powerful combination of QH (ubiquinol) with PQQ (pyrroloquinoline quinone), which is considered by some authorities to be an essential nutrient.
QH is the reduced (active antioxidant) state of Co-Q10, the form produced by our cells. It is significantly better absorbed than ubiquinone.
PQQ with QH promotes the creation of new mitochondria, a process known as mitochondrial biogenesis. QH+PQQ supports both heart health and cognitive function.

Kaneka QH® is a registered trademark of the Kaneka Corporation of Japan.

BioPQQ™ is a trademark of MGC (Japan).

What Are PQQ & QH? PQQ ™
(pyrroloquinoline quinone) is an essential cofactor incorporated into a family of proteins critically involved in cellular growth and differentiation, redox signaling, and stress tolerance, that some researchers argue is also a vitamin for humans. From a dietary supplement standpoint, the ability to stimulate the creation of new mitochondria is the shining attribute of PQQ.

QH (ubiquinol) is the chemically-reduced, or “active antioxidant,” form of CoQ10. Inside the body, ubiquinone (oxidized Q10) can achieve its important functions in energy production, cardiovascular health, and antioxidant protection only with the help of QH. Yet, importantly, QH differs from regular CoQ10 (i.e. Q) in demonstrating at least 2 times greater absorption upon ingestion. Furthermore, the ratio of QH:Q (reduced:oxidized) is known to decrease with age and in tissues that are metabolically out of sync, suggesting the elevated importance of QH even in comparison to Q.

Helping The Heart
The incessant pumping action of the heart and a large, constant demand for ATP, lead to many active mitochondria in cardiovascular tissue. But the byproduct of ATP production is free radical generation, demanding constant oxidative protection. Researchers have examined possible roles for PQQ in the heart and have concluded, “PQQ, which appears to act as a free radical scavenger in ischemic myocardium, is a highly effective cardioprotective agent.” In particular, it has been determined that PQQ protects mitochondria from reperfusion related oxidative damage helping to keep blood and energy flowing to heart tissue even when under duress.

Meanwhile, the importance of QH to the cardiovascular system is well- documented. CoQ10 continues to gain interest due to cholesterol- lowering drugs (statins) inhibiting the enzyme that is also responsible for CoQ10 biosynthesis. As a result, anyone taking statins may have reduced levels of CoQ10.

Energizing The Brain
Like the heart, the brain is an energy-intensive organ. In animal and in vitro experiments, PQQ and CoQ10 have separately exhibited positive effects in the areas of learning and memory. Researchers at the Laboratory of Neuroregeneration have also recently noted that PQQ led to the phosphorylation of two kinases, Akt and GSK3β. These kinases possess a larger role in neuronal protection and metabolism indicating a more sustained regulatory impact on brain tissue, even during normal day-to-day rigors.

Importantly, useful brain research is neither limited to animal models nor to PQQ and QH separately. In fact, the combination of 20 mg PQQ plus CoQ10 administered daily in one clinical trial was sufficient to yield substantial benefits to aging humans in multiple areas of cognitive function and well-being.

Mitochondrial Biogenesis
With age, the number of functional mitochondria decline. Aging muscle tissue, for example, is less resilient and recovers from challenges at a slower rate because the number of functional mitochondria is reduced. The best-known methods of stimulating the production of new mitochondria--extreme physical exercise and caloric restriction—are not options that appeal to most individuals. Consuming PQQ may offer a more palatable alternative. PQQ is valuable as a mitochondrial antioxidant that works particularly well with CoQ10.

One mechanistic pathway of PQQ involves increased expression of peroxisome proliferator-activated receptor gamma coactivator 1-alpha or PGC-1α. A second pathway includes activation of the signaling protein known as cAMP-response element-binding protein or CREB. Researchers have concluded that the “ability of PQQ to stimulate mitochondrial biogenesis accounts in part for action of this compound and suggests that PQQ may be beneficial in ... mitochondrial dysfunction.”

QH+PQQ is the powerful combination of QH (ubiquinol; reduced Q10) with PQQ (pyrroloquinoline quinone), which is considered by some authorities to be an essential nutrient. QH is the reduced (active antioxidant) state of CoQ10, the form produced by our cells. It is significantly better absorbed than ubiquinone (oxidized Q10). PQQ with QH promotes the creation of new mitochondria, a process known as mitochondrial biogenesis. QH+PQQ s upports both heart health and cognitive function.

Read more
What is co-enzyme Q10 and why is it important for our health?

Read more
Boost energy levels in your body with PQQ

Boost energy levels in your body with PQQ

Our cellular energy comes from mitochondria, which are the powerhouses of the cell. Mitochrondria are the tiny organelles working to produce cellular ATP, the energy currency of any living cells.
Read more
Dry, drier, driest

Now autumn finally arrived, some of us will notice the skin gets drier and drier. In a mild case of extreme dryness, we will notice flaky and a reddened skin. In a more severe case, you will get chapped skin due to the cracked upper layer, which can be especially painful at the heels.
Read more
Aging gracefully

Ever since mankind exists, one of our biggest desires is to age gracefully and therefore we are interested in the peculiarities of populations that grow very old, seemingly without effort.

recommended use
take 1 softgel once or twice per day with a meal or as directed by your qualified health care professional.

storage
keep dry and closed at normal room temperature
keep out of reach of young children
Particle formation inside softgel is normal and dissolves after ingestion.