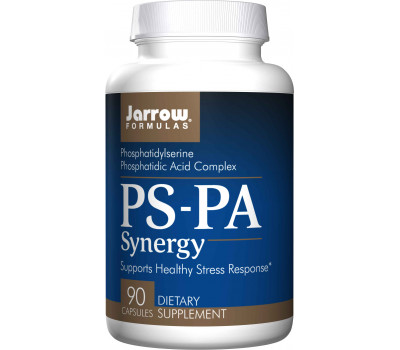 Discontinued, we refer you to another phosphatidylserine product

Phosphatidylserine (PS) is a phospholipid nutrient found in fish, green leafy vegetables, soybeans and rice, which is essential for the normal functioning of neuronal cell membranes and activates Protein kinase C (PKC) which has been shown to be involved in memory function.

who can benefit from PS-PA Synergy
Individuals who wish to support cognitive function and promote performance, especially with advancing age or when under chronic stress will find this product useful. Phosphatidic acid also helps enhance resistance exercise-induced hypertrophy.

Phosphatidylserine (PS)
Phosphatidylserine and other phospholipids are the majorcomponents of cell membranes, where they contribute to membrane permeability and fluidity. Both permeability and fluidityimpact cell-to-cell communication by regulating the movementand functionality of various molecules. PS is also found in the mitochondrial membrane, where it plays a similar role as in the cellular membrane, but may also serve as a metabolic reservoir for other phospholipids.

In the brain, PS is an abundant phospholipid where it is an important component of nerve cells. It is functionally critical to neurotransmission and the normal brain functions needed for healthy cognition, mental performance, attentiveness, and reaction time. In animal models, levels of PS in the brain have been shown to decline with age. However, only small quantities of phosphatidylserine are present in dietary sources.

Phosphatidic Acid (PA)
Phosphatidic Acid is a precursor of several phospholipids. Its biologically important derivatives include phosphatidylcholine,phosphatidylethanolamine, phosphatidylinositol, phosphatidylserineand cardiolipin. Aside from being a precursor for the biosynthesis of other lipids and a major constituent of cell membranes, it can act as a signaling lipid. In clinical studies, the combination of PS + PA has demonstrated a number of benefits, including support for memory,mood and responses to stress. Data from trials suggest a possiblebeneficial effect on hypothalamus – pituitary – adrenal axis (HPA)responses under psychological stress. At least one human trial has indicated that PA may offer the further effect of supporting musclehypertrophy.

In addition to its own special functions, PA can serve as a precursor reservoir for other phospholipids, including PS.

The Aging Brain
When PS levels decline, the brain can begin to subtly change in a number of ways. Memory is often a foremost concern. As such, much of the PS research has involved older individuals with suboptimal short-term memory function. Nevertheless, a significant amount of published clinical research has demonstrated that PS supplementation supports other cognitive parameters, as well.
For example one multi-center, placebo-controlled study evaluated the effects of oral PS supplementation (300mg/day) in 494 elderly patients. Enhancements in behavioral parameters including motivation, initiative, interest in the environment, and socialization were observed. Whereas in another study older individuals without any symptoms of dementia received 300mg/day of PS for 30 days. At the end of the study, those who had received PS showed benefits in mood, memory, and behavioral symptoms, as well as neurochemistry.

PS has a very favorable benefit-to-risk profile. Most of the research on PS for cognitive support in adults suggests 300 mg is an adequate daily serving.

PS + PA versus Physical and Mental Stress
Cortisol is an important hormone secreted by the adrenal glands as part of the “fight or flight” response. It is a catabolic stress hormone in the sense that it signals the mobilization of resources to respond to stressful stimuli in the present—to survive. One example of this is how cortisol levels rise after intense exercise, which then signals muscle-tissue breakdown. PS and the combination of PS + PA have been found to blunt these effects. In animal studies, the administration of PS has been found to improve adaptability to environmental changes and to enhance interaction with foreign objects after acute stress stimuli. Attempts to uncover mechanisms of action for these findings have indicated, among other actions, that the combination of PS + PA can alter endocrine responses by influencing the adrenal reactivity with a possible beneficial effect on the hypothalamus – pituitary – adrenal axis.

Such findings have important implications. Mental stress, particularly when it is chronic, can affect the brain and negatively impact cognitive performance. Although the mechanisms by which it acts is not entirely clear, PS seems to provide some protection from these effects by buffering cortisol levels. For example, in a double-blind, placebo-controlled trial of healthy individuals exposed to mental stress, those who received PS for 6 weeks demonstrated superior performance and a much more relaxed state (decreased Beta-1 power in frontal brain regions) when asked to complete challenging cognitive tasks.

Jarrow Formulas’ PS-PA Synergy is a source of natural phos-pholipids that are components of cell membranes and support a healthy stress response.

recommended use
take 1 softgel 3 times per4 day with meals