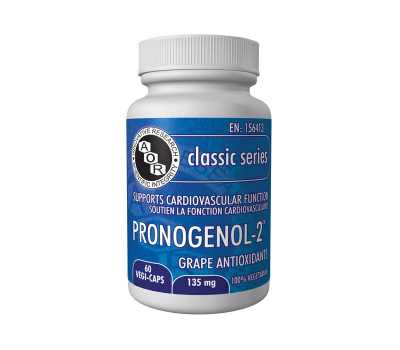 AOR Pronogenol-2 is a complete-spectrum grape antioxidant formulation. The better than average heart health of the French has been attributed to their intake of red wine, which contains a range of antioxidants from the full fruit of the vine, including resveratrol, grape seed oligomeric proanthocyanidins (OPCs), and grape skin polyphenols. These antioxidants each have unique roles in maintaining the structure and function of the vasculature, modulating the function of platelets in the blood, and regulating inflammatory enzyme function – all important to healthy cardiovascular function.

The Health Benefits of Grapes
Pronogenol-2 is a mixture of compounds extracted from grape. While grapeseed extracts are known to have many beneficial health effects, there are just as many phytonutrients that are found in grape skins. These compounds are particularly noted as antioxidants, protecting cells from damage caused by harmful byproducts of metabolism.

Potent Antioxidants
Grape phytonutrients have many roles besides their activity as antioxidants. They are also useful for supporting the health of the cardiovascular system. These nutrients have the ability to block the aggregation of platelets, thereby inhibiting the constriction of blood vessels, and maintaining normal blood flow. They also regulate the function of inflammatory enzymes, to prevent excessive inflammation.
One of the compounds found in grapes is resveratrol, which has become renowned for its antioxidant and anti-inflammatory roles, and its ability to support heart health.

A Complete Formula
Grapes contain a long list of beneficial nutrients. While not all of them are known, and not all of their mechanisms are understood, science is clearly showing that grape extracts have many beneficial effects on health. Pronogenol-2 contains a complete-spectrum formulation of grape extracts from both the seed and the skin of grapes.

Grape Extract - Not Just The Seed
Those who are familiar with the science of nutritional supplements are no doubt familiar with the antioxidant capabilities of grape seed extract, but the phytonutrient value of the grape does not begin and end with the seed. The fact of the matter is that the polyphenolic content of the skin is at least equal to that found in the seed, and the diversity of each of the respective polyphenolic sources is such that they each perform distinctively specific tasks. The synergy between the polyphenols of the skin and seed of the grape was effectively demonstrated in a study where a combination of polyphenols from both sources significantly outperformed both grape seed extract and grape skin extract separately in terms of anti-platelet activity.

A Closer Examination of A Very Complex Product
From the myriad of polyphenols that are known to exist in the skin of the grape surrounding the OPC-rich seeds, one in particular has been selected very recently for particular scrutiny - resveratrol. Resveratrol is most often identified as an antioxidant with the capability to hamper free radical damage linked to cancer. It has also been linked with the capability to raise HDL cholesterol. However, the largest areas of scrutiny in the most recent clinical trials appear to be focused on resveratrol's anti-inflammatory potential.

Not Just another Antioxidant
First and foremost, full-spectrum grape extract is one of the most potent antioxidants known to science. This is a very profound statement considering the fact that there are well over 5,000 known flavones currently being studied (and more being discovered all the time) for their antioxidant properties, with those properties confirmed in several hundred of them already.

The very definition of an antioxidant is that it is a scavenger of free radicals, and two of the most virulent of these are the hydroxyl radical and superoxide anion. Free radicals in general and these types in particular have been implicated as playing a role in the etiology of cardiovascular disease, cancer, Alzheimer's disease, and Parkinson's disease. In fact, they are the most actively prolific free radical by-products of reactive oxygen species (ROS). Proanthocyanidins scavenge these just as more conventional antioxidants do, such as vitamin C or E. However, proanthocyanidins do it via a different mechanism and are decidedly superior to either of these traditional antioxidants with respect to the number of free radicals they scavenge.

Another central capability of proanthocyanidins that distinguishes them from other antioxidants is their renowned effect on the circulatory system. Proanthocyanidins have been studied as a credible treatment for thrombosis due to their clinically examined inhibitory effects on excessive platelet aggregation

recommended use
Take 1 to 2 capsules per day, or as directed by your qualified health care consultant.