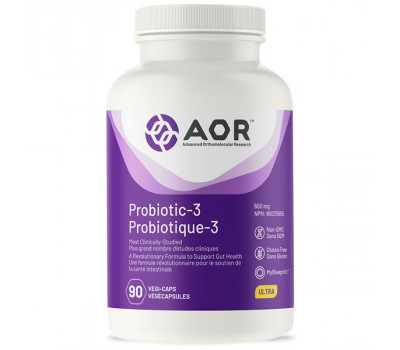 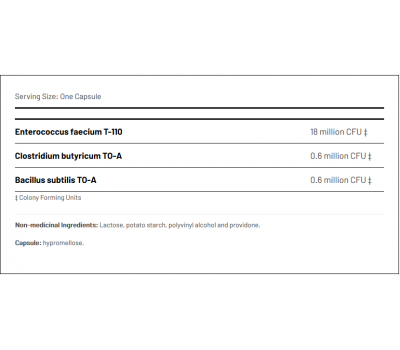 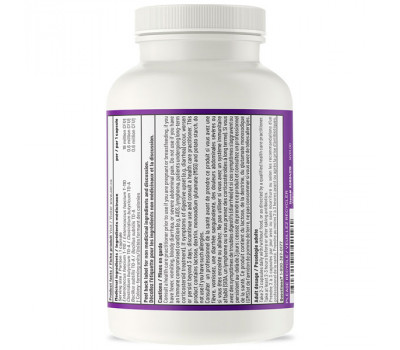 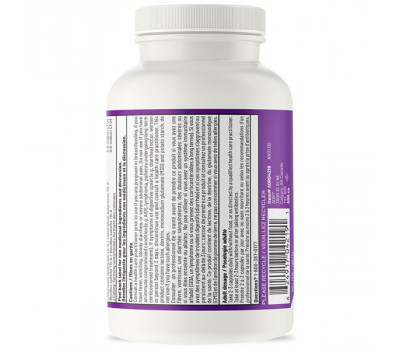 The enterobacteria contained in AOR's ProBiotic3 act in symbiosis and promote a healthy intestinal flora.  Lactic acid and butyric acid-producing probiotics inhibit the growth of pathogenic bacteria while promoting the growth of the beneficial Bifidobacterium strain.

Many health conscious individuals today are becoming aware of the role of beneficial bacteria in the human body. Healthy bacteria in the gut act as a barrier against harmful bacteria by preventing their attachment to the intestinal lining. Disturbances in this delicate gastrointestinal microflora increase the susceptibility to pathogens and raise the risk of infection and disease. Probiotics help to re-establish and support a normal bacterial microflora in the intestines, particularly after antibiotic use.

Probiotic-3 is a unique probiotic formula that contains three bacterial strains with specific health-promoting attributes: Enterococcus faecium T-110, Clostridium butyricum TO-A, and Bacillus subtilis TO-A. While these three strains are almost unheard of in the North American market, they have been widely used in hospitals and pharmacies throughout Asia for over 50 years. Each has been shown to survive the stomach’s acidic environment, bile acids and digestive enzymes, meaning they survive transit through the body, reaching the intestines alive and intact.

Over 30 clinical studies on Probiotic-3 in Japanese and English have highlighted such health benefits as reducing allergies, improving immunity, fighting colds and flu, promoting detoxification, reducing intestinal symptoms such as bloating and constipation and reducing travelers and antibiotic-induced diarrhea.

A Clinically Tested Probiotic Formula
Although associated with spoiled food and infections, not all bacteria are harmful. As humans, we carry more bacterial cells in our bodies than human cells. Most of these bacteria are found in our gastrointestinal tract where billions of bacteria reside in a delicate equilibrium that is essential to our health. This mutually beneficial relationship between enterobacteria and the human body is important for the maturation of the immune system, for a normal inflammatory response, for a healthy gastrointestinal tract, and for many other aspects of health. The intestinal flora is essential for digestion and produces several important nutrients from otherwise indigestible foodstuffs.

While antibiotic use is sometimes necessary in order to fight infection, it can cause disturbances in the delicate gastrointestinal microflora, resulting in increased susceptibility to pathogens and elevated risk of infection and disease. Probiotics help to re-establish and support a normal bacterial microflora in the intestines, which act as a barrier against harmful bacteria by preventing their attachment to the intestinal lining.

Probiotic-3 is a probiotic formula that has been used clinically for more than 50 years in Japan and across Asia. Extensive clinical research has highlighted the following beneficial effects of the three strains used in Probiotic-3:

Clostridium butyricum TO-A
Clostridium butyricum TO-A is also a natural resident of the human gastrointestinal tract and breaks down dietary fiber into several beneficial nutrients, one of which is butyric acid. Butyric acid is an important source of nourishment for the colonocytes (the cells of the lower gastrointestinal tract) and reduces inflammation and intestinal permeability. This strain has also been shown to have antagonistic effects against several pathogenic bacterial strains such as C. difficile, H. pylori and E. coli.

Microflora in the Gastrointestinal Tract
The gastrointestinal tract (GIT) of an adult person is an approximately 6.5m convoluted tube that is divided into the upper portion consisting of the oral cavity, esophagus and the stomach and the lower portion which consists of the small and large intestines. Because of the multiple folds and finger-like projections – called microvilli – the surface area is approximately 200 times that of the skin! The GIT houses a diverse and complex microbial population, only a fraction of which have been identified and studied.

The lower portion of the human gastrointestinal tract (GIT) is a more densely populated ecosystem than the planet, with billions of bacteria, yeasts and fungi calling it home. Many of these microorganisms have beneficial effects on human health, making the GIT a key organ in the body.

Each organism is classified into a different genus, species and strain, producing thousands of similar yet separate organisms performing distinct functions. These organisms are grouped into three broad categories:


However, all the symbionts can be classified as one of the following:

1.  Lactobacillus
2.  Bifidobacterium
3.  Others which include yeast, E. coli, propinobacterium, etc.

The term ‘probiotics’ was first used in 1953 to indicate beneficial strains which can be taken in order to promote bacterial life, in contrast to harmful antibiotics which kill microorganisms. The WHO definition of probiotic is “live organisms which, when administered in adequate amounts, confer health benefits to the host.” Some of the health benefits are:


Probiotics have been used for centuries, but only over the past 100 years have they been studied in depth. Japan is the world leader in the use of probiotics in various types of foods like yogurt, candy, milk, desserts, etc.

For any probiotic, the following are important requirements:

1. Clinically studied. The more studies, the better (as there is a strong placebo effect to contend with). Products not subject to clinical study need to be viewed with caution. 2. The right strains that are naturally found in humans.
3. Resistant to mutation, i.e. not subject to genetic change so that these beneficial organisms don’t become toxic themselves or help spread antibiotic resistance.
4. Must be stable and resistant to stomach acid, bile salts and digestive enzymes. It also helps if the organisms are room temperature stable for convenience, i.e. when travelling.
5. Must have a documented ability to deliver health benefits, for example stimulating the immune system, having anti-allergic effects, supporting detoxification, etc.
6. Strains must be compatible with each other and not only that but be synergistic. Most products contain a random combination of strains thrown together with no idea if they are compatible except a hope that they will work together and not kill each other.
code GTIN:
0624917042191
code MPN:
AOR04219
brand
Brand or make of the product, sometimes the name of the manufacturer
:
Advanced Orthomolecular Research
best before:
March 2024
appearance:
audience

recommended use
Take 3 capsules per day in divided doses between meals, or as directed by a qualified health care practitioner.