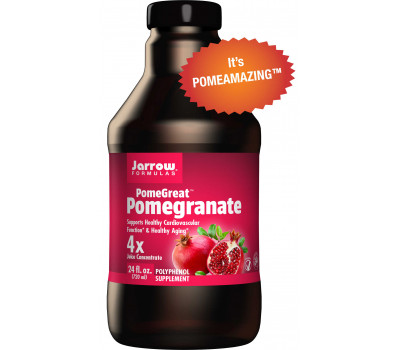 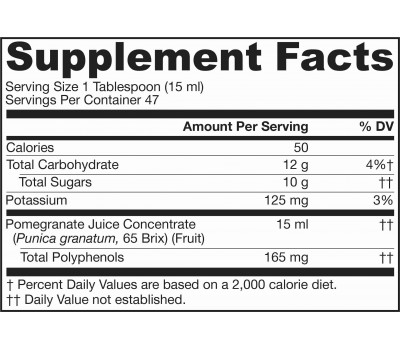 Jarrow Formulas PomeGreat Pomegranate Juice Concentrate is made with California Wonderful Variety pomegranate fruit. It is 4 times more concentrated in antioxidants than regular pomegranate juice. Only 1 to 2 tablespoons a day are necessary to capture pomegranate’s health benefits.

who can benefit from PomeGreat?
Pomegranate juice is an important nutrient for anti-aging. Antioxidants and other nutrients in pomegranate juice have been shown to support cardiovascular, immune, prostate and cognitive health.

The pomegranate (Punica granatum) has long been recognized as a fruit with many health benefits. Pomegranate tops all other conventional fruits, including blueberry and strawberry, in its ORAC (Oxygen Radical Absorbance Capacity) value, ranking pomegranate as one of the most powerful antioxidant fruits.

background reading
Jarrow Formulas Pomegranate Juice Concentrate is a 4-fold concentrated juice from the arils (seed cases) of pomegranate (Punica granatum), one of nature’s richest sources of polyphenolic anti-oxidants. It has a high ORAC (Oxygen Radical Absorbance Capacity) Value of 1245.

Jarrow Formulas Pomegranate Juice Concentrate
The pomegranate, with its distinctive scarlet rind (pericarp) and vibrantly colored seed cases (arils), is one of the oldest cultivated fruits in the world. This exotic fruit features prominently in religious texts and mythological tales and has been revered through the ages for its medicinal properties. The fruit comes from a small, bush-like tree that is native to an area spanning Israel to the Himalayas in northern India, and has been cultivated extensively in the subtropical regions of Asia and Africa, as well as in California.

Pomegranate preparations contain a wealth of bioactive compounds. Aside from being a good source of vitamins (B1, B2, C and niacin) and minerals (particularly potassium), pomegranates are rich in anthocyanins and hydrolyzed tannins. The anthocyanins delphinidin, cyanidin, and pelargonidin are the polyphenolic flavonoid pigments responsible for the deep colors and antioxidant capabilities of blueberries, cranberries, and grapes.

Punicalagin: super heart and vascular health
Pomegranates are an especially potent source of the hydrolyzed tannins punicalagin, ellagic acid, and gallic acid. While these compounds are potent antioxidants in their own right, they have also been extensively studied for their properties supporting healthy cell maintenance. Numerous clinical studies of these three compounds have illustrated their detoxification ability, DNA protection, inhibition of lipid peroxidation, and liver protection. And while it may seem counterintuitive, commercially processed pomegranate preparations actually contain more of these beneficial polyphenols than fresh pomegranate. Several recent experimental and clinical studies support the value of pomegranate preparations and derivatives, especially for the cardiovascular system.

In a clinical study of ten human subjects, pomegranate juice polyphenols lowered the activity of angiotensin converting enzyme (ACE) by 36%. ACE inhibition has been postulated to improve cardiovascular health by a number of mechanisms, including the inhibition of platelet aggregation and reduction of lipid peroxidation. In laboratory studies of human endothelial cells, pomegranate flavonoids increased the production of prostacyclin, a potent vasodilator and inhibitor of platelet aggregation and cell adhesion.

Laboratory studies of pomegranate juice and seed extracts showed that they are inhibitors of lipoxygenase, the enzyme that catalyses the formation of leukotrienes and may play a role in arterial plaque formation and inflammation.

A two-week study of healthy male volunteers consuming pomegranate juice demonstrated a signifi cant reduction of low density lipoprotein (LDL) aggregation and retention. In the same study, pomegranate juice increased the activity of paraoxonase, an enzyme that may protect against lipid oxidative damage. Similar results were seen in a mouse model, with pomegranate tannins increasing the cellular release of cholesterol by 39% (the cholesterol could be disposed of as it was no longer being stored) and lowering LDL oxidation by 31%.

In laboratory tests of Oxygen Radical Absorbance Capacity (ORAC; a standard for antioxidant capacity established by the FDA), fresh pomegranate fruit and juice preparations surpassed the antioxi- dant activities of green tea, red wine, cranberry, blueberry, and grape juices, all of which have been venerated for their free-radical defensive properties.

Pomegranate polyphenols have been shown in the laboratory to inhibit vascular endothelial growth factor (VEGF) and the formation of the new blood vessels (angiogenesis), which supports the fruit’s role in maintaining healthy cell replication. Evidence is also accumulating to support the benefi ts of pomegranate juice in supporting immune, prostate and cognitive health.

recommended use
Take 1 to 2 tablespoons of Pomegranate Juice Concentrate per day. May be mixed in cold water, juice, tea, or other beverage of choice

storage
Refrigerate after opening. To extend shelf life, this product would be best kept refrigerated at all times. Use within 60 days after opening.

contra-indication
Pomegranate juice, like grapefruit juice, may interact with a number of medications. People on any medication, especially on anti-hypertensive or cholesterol lowering medications, or people who are allergic to many plants, should consult their physician before taking pomegranate juice or pomegranate products.