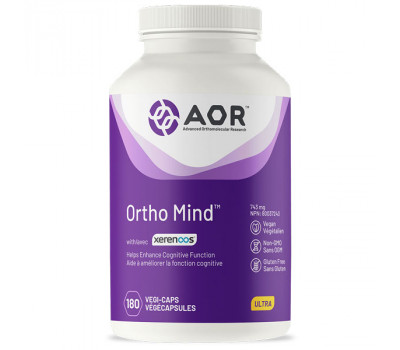 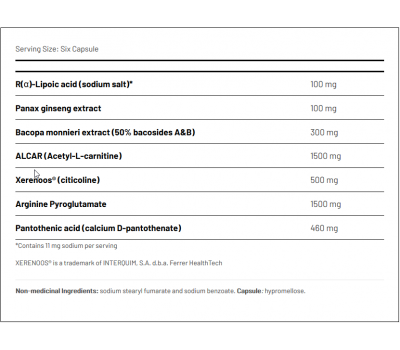 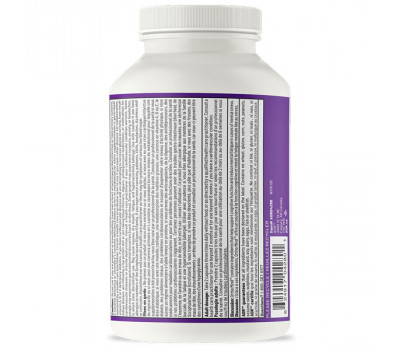 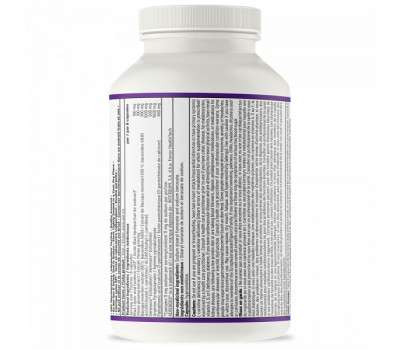 AOR Ortho•Mind contains a lot of active ingredients that support cognitive performance while protecting against age-related cognitive decline and reduce mental fatigue in cases of mental stress. Ortho•Mind also contains antioxidants and other factors in the maintenance of good health. These ingredients are It R(α) lipoic acid, acetyl-L-carnitine, citicoline, the Ayurvedic herb Bacopa monnieri, L-pyroglutamic acid and the Asian herb Panax ginseng.
R(α) lipoic acid is also a powerful antioxidant, protecting nerve cells from damage.
Citicoline supports phospholipid and neurotransmitter synthesis, both of which support mood and brain cell function.
Bacopa monnieri, an herb long revered in Ayurvedic tradition, has been studied for its effects on cognitive enhancement in both adults and children. Both bacopa and pyroglutamic acid have been shown to enhance learning, information processing and memory.
Finally, all of the ingredients in Ortho•Mind™ have been clinically studied in patients with cognitive impairments, all with positive results.

Advanced Cognitive Support
To support optimal brain structure and function, a cognitive enhancement formula must:
• facilitate the delivery of fuels to brain cells, in the form of oxygen and glucose.
• support the clean, efficient burning of these fuels in the mitochondria (cellular "power plants").
• protect the cells of the brain from the toxic insults, whether from without, or from within (in the form of the free radicals which are the byproducts of cellular energy production).
• maintain or restore neural cell membrane phospholipids, crucial for cellular communication.
• support optimal levels of key nerve cell messenger-molecules (neurotransmitters).
Ortho•Mind is that formula.

background reading
AOR Ortho•Mind is a safe, natural way to enhance brain metabolism and cognition without the use of stimulants.

Ortho Mind 1.0 is an advanced formula for cognitive enhancement

R-Lipoic Acid
R-Lipoic Acid is a key mitochondrial metabolite, needed by these cellular "power plants" to drive nerve cell metabolism. R-Lipoic Acid is the natural, mitochondrial form of this critical orthomolecule - not to be confused with the artificial "racemic compound" sold as "lipoic acid" or "alpha-lipoic acid." R-Lipoic Acid improves the efficiency of mitochondrial function, while preventing the age-related increase in free radical production which is exacerbated when ALCAR is taken alone. R-Lipoic Acid has also been shown to reverse the buildup with age of iron in the brain of laboratory animals - a buildup associated with human neurological disorders. One open study supports the use of lipoic acid in Alzheimer's disease. The dose found in Ortho•Mind is there to "top up" the amount found in a core R-Lipoic Acid supplement used for general health and anti-aging goals.

Acetyl-L-Carnitine (ALCAR)
Carnitine is an amino acid that helps shuttle fatty acids into the mitochondria to produce energy. ALCAR is an acetylated form of carnitine, which allows it to cross the blood-brain barrier more effectively. ALCAR has been found to slow the cognitive deterioration and improve mental function. In an early double-blind, placebo-controlled study of 130 patients clinically diagnosed with Alzheimer's disease receiving ALCAR, a slower rate of deterioration was observed in 13 of 14 outcome measures at the end of the one-year study. These measures included intelligence, long-term verbal memory and selective attention. There is also research suggesting that N-acetyl levocarnitine enhances Nerve Growth Factor (NGF), a protein that stimulates the growth of nerve cells.

Numerous controlled clinical trials attest to its use in a variety of cognitive disorders and in brain function in young, healthy adults. A study on 1.5g of ALCAR supplementation in young adult subjects aged 22-27 for 1 month found that test subjects had better reflexes than controls to an auditory stimulus, and test subjects also demonstrated 3-4 times greater efficiency in navigating a video-game maze than controls.

ALCAR has also shown to be useful in improving energy and mental function in the healthy elderly, in chronic fatigue, and in stroke rehabilitation. ALCAR is best when combined with Lipoic Acid.

But however they work, the nootropics' ability to improve learning, memory consolidation, and retrieval in normal, healthy people has been well-established in clinical trials. Piracetam, which is the most widely-researched of these "smart drugs," has also been found effective in dyslexia, although results in Down's syndrome and Alzheimer's disease have been inconclusive. One of the most interesting effects reported with piracetam, and believed to be universal to the nootropics, is its ability to facilitate communication between the left (verbal/logical) and right (spatial/ mathematical/creative) hemispheres of the brain. Subjectively, many users report that L-Pyroglutamic Acid and the nootropics "wake up your brain," although the effect is quite distinct from that of stimulants such as caffeine.

In one randomized, double-blind, placebo-controlled trial, 40 men and women with age-associated memory impairment were first run through a series of memory tests, and then took either a supplement providing 1276 milligrams of L-Pyroglutamic Acid or a look-alike pill for sixty days. At the end of the study, people taking L-Pyroglutamic Acid experienced a 37.8% improvement in their ability to remember words after a twenty-minute pause; a 17% jump in immediate recall of categorized words; a corresponding 30% boost in recall of those same words after a delay; and a 50% lower rate of "false positives" (wrongly "recognizing" faces that they had never seen before). People getting the placebo experienced no improvements.

Despite the sound of the name, L-Pyroglutamic Acid is not a potential "excitotoxin" like glutamate. Studies in laboratory animals have not only shown that feeding large doses of this nutrient to newborn mice are harmless, but that direct injection of L-Pyroglutamic Acid into the adult brain causes no negative effects. In fact, an animal experiment demonstrated that L-Pyroglutamic Acid actually protects the brain from glutamate excitotoxicity!

Bacopa monnieri
Bacopa monnieri, an herb long revered in Ayurvedic tradition, has been used to "open the gateway of intelligence" in infants, and many of the studies documenting its cognitive-enhancing powers have been conducted in school children. Studies have also shown it to be helpful in relieving anxiety. The latest and best study on the brain-boosting powers of Bacopa has given the herb its strongest scientific endorsement yet. In this double-blind, placebo-controlled study, 46 healthy men and women took a battery of neuropsychological tests before the trial began. Then, Australian scientists provided half of them a daily supplement containing 300 milligrams of standardized Bacopa extract, while the remaining 23 people took placebos.

At the end of the twelve-week study, men and women supplementing with Bacopa showed significant improvements in cognitive function compared to the group taking the placebo pill, processing visual information 15% faster (as measured by the inspection time (IT) test), showing a 14% greater rate of learning - and a 33% lower rate of forgetting - verbal information, and a remarkable 108% better ability to consolidate new information without interference from previously-learned data (the problem of "proactive interference"). Few side effects were seen in the study, the most notable being increases in thirst and urination. Interestingly, in fact, the people taking Bacopa actually suffered fewer headaches than did those getting the dummy pills!

Recently, studies have begun to give us some exciting clues about the potential long-term, neuroprotective effects of this Ayurvedic secret. A recent animal study revealed that Bacopa boosts the brain's production of the key protective antioxidant enzymes superoxide dismutase (SOD) and catalase (CAT).

Despite what you might hear, you can't boost levels of SOD or CAT by taking them as preformed supplements: even when taken sublingually, these enzymes are destroyed by other enzymes. One of the few things that can rev up the brain's production of these enzymes is the Parkinson's drug deprenyl (Eldepryl®); this jump in SOD and CAT has been associated - in a series of remarkable experiments in mice, rats, hamsters, and dogs - with remarkable jumps in lifespan. In the most dramatic of these experiments, deprenyl actually extended the built-in maximum lifespan of lab rats by as much as 24% - a feat unprecedented by any other drug or nutrient.

But the results of other studies show that the effect is inconsistent. The success or failure of deprenyl in extending life seems to be closely associated with whether the drug boosts CAT and SOD in these organisms under the conditions of a given study. So it's especially encouraging that the effects of Bacopa on these enzymes were shown to be even more broad-ranging than those of deprenyl, affecting a wider range of areas in the brain, and simultaneously boosting levels of the detoxifying glutathione peroxidase (GSH-Px) enzyme - an effect not seen with deprenyl.

Panax ginseng
Lastly, Panax ginseng is very well known for its cognitive boosting powers. For example, in one study including 97 Alzheimer’s patieRnts it was found that taking 4.5g of ginseng powder for 12 weeks significantly improved cognitive function in the patients. The improvement deteriorated after supplementation was stopped. Furthermore, the combination of Panax ginseng with ginkgo has been shown to be especially effective. In one study healthy middle-aged individuals were given 60mg of ginkgo along with 100mg of Panax ginseng for 14 weeks. The ginkgo/ginseng combination was found to significantly improve an Index of Memory Quality, supporting the results of previous studies. This effect represented an average improvement of 7.5% and reflected improvements to a number of different aspects of memory, including working and long-term memory.

The Grand Old Duke of York ...
If you want to get results with a cognitive support supplement - or any other supplement or drug - it's critical to ensure that you're getting the right dose. Far too few "kitchen sink" nutritional formulas throw in small, meaningless doses of various ingredients just so that they can list the nutrient in question on their labels.

Clinical trials are the "magnetic pole" that can guide us to the effective doses of a given nutrient. But combination cognitive support formulas present unique dosing challenges. Many "smart drugs," botanicals, and nutrients display an "inverted ‘U' response curve:" enough is enough, too little is too little - and too much is too much. Taking excessive amounts of cognitive-enhancing supplements, in other words, can actually make you dumber than taking a "just right" dose! And since these nutrients and botanicals also interact in hard-to-predict synergy, the optimal dose for a given supplement taken alone can be excessive when combined with synergistic partners.

Therefore, each individual must titrate his or her dose of cognition-enhancing nutrients to his or her own optimal level. Ortho•Mind is formulated with amounts of each individual nutrient which are at the low end of the spectrum of doses proven to be effective in controlled clinical trials. But for most people, the full six capsules will be too much, leaving them on the falling side of the inverted "U." So it's best to start low - one or two capsules a day - and build slow, adding one capsule every three days or so, using subjective experience and (if possible) objective tests to guide you to your personal peak in mental performance. For most people, this will be two to four capsules a day.

AOR Ortho•Mind is a safe, natural way to enhance brain metabolism and cognition without the use of stimulants.

recommended use
Take 2 capsules three times daily without food or as directed by your qualified health care consultant.