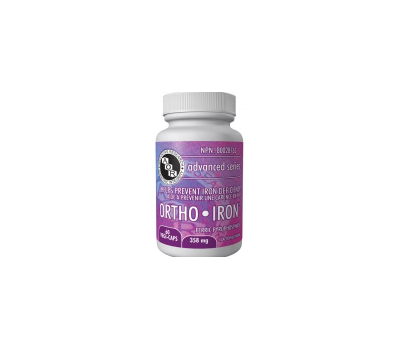 Discontinued and replaced by IronSorb+Lactoferrin

AOR Ortho Iron helps prevent iron deficiency. Iron deficiency is the leading nutritional disorder in the world, and can cause anemia - leading to weakness, fatigue and gastrointestinal difficulties.

Iron is an essential trace mineral required as a component of hemoglobin and myoglobin for transport of oxygen to tissues. Supplementing with iron can become essential during pregnancy or during times of frenetic growth for teenage males and females

An Important Mineral
Iron is an essential mineral in the body. It is involved in energy production and also is a key component of hemoglobin – the molecule that transports oxygen to the cells. Deficiencies in iron can lead to anemia, which results in weakness, fatigue, reduced cognitive function and suppression of the immune system. It is estimated that 25% of the world’s population have some degree of iron deficiency.

The Supporting Cast
Ortho•Iron also contains other nutrients and vitamins that help support healthy iron levels. It contains lactoferrin, an iron carrying protein shown to improve blood iron and hemoglobin levels, and vitamin C, a well known antioxidant which also improves iron absorption. Other nutrients such as vitamin B12, folate, vitamin B6 and copper are also included in Ortho•Iron to ensure other anemias related to these other essential nutrients do not go untreated.

A Better Iron Supplement
Ortho•Iron contains SunActive®Fe iron, a registered form of iron that animal studies have shown to be more bioavailable than other more common forms of iron such as ferrous sulphate and sodium ferrous citrate. SunActive®Fe has 84-94% absorbability, and is much easier on the stomach than other forms of iron.

Iron is a fundamentally essential trace mineral in human nutrition. Iron is involved in the entire process of respiration, particularly oxygen and electron transport, as well as possessing immune system and cognition enhancing capabilities.
Iron-deficiency, which can lead to anemia, is the most common nutritional disorder in the world with approximately 25% of the world’s population being iron-deficient. Even iron deficiency states that do not lead to anemia may have sweepingly detrimental effects on human health, including compromised cognitive function, overall weakness and fatigue, and a weakening of the immune system.

Hemoglobin is a protein component of red blood cells that is primarily responsible for the transport of oxygen from the lungs to the cells of the body, and iron is a central component of hemoglobin. Iron is also involved in the production of myoglobin, L-carnitine and aconitase, all of which perform important functions with regard to energy production in the body. In addition to its fundamental roles in energy production, iron is involved in DNA synthesis and may also play roles in normal brain development and immune function. Furthermore, iron is involved in the synthesis of serotonin, dopamine, norepinephrine and even collagen.

The most well-known condition of iron deficiency is of course anemia, which is associated with feelings of weakness and fatigue. Other conditions associated with iron deficiency include Plummer-Vinson syndrome, a condition characterized by difficulty in swallowing solid food due to the presence of a thin, web-like membrane growing across the upper passageway of the esophagus. Those with Plummer-Vinson syndrome are at an increased risk of cancer of the esophagus and stomach, and iron supplementation has been shown to prevent this syndrome.

The best dietary sources of iron are spinach, chard, thyme and turmeric. Pregnant and menstruating women are often at risk of iron deficiency (and consequently anemia), as are infants, adolescents, endurance athletes, and those under any other condition of growth and/or fatigue. The loss of iron – and thus the need for supplementation - also occurs during conditions of blood loss such as uterine bleeding in post-menopausal women on hormone replacement therapy, gastrointestinal bleeding, and bleeding from trauma or surgery. Some iron loss also occurs through mucosal excretions and skin sloughing.

It has been reported that up to one-quarter of adolescent schoolgirls in North America are non-anemia iron-deficient. In one double-blind, placebo controlled study, female adolescent subjects received either 650 milligrams of iron twice daily or a placebo for eight weeks in order to examine its effects on cognitive function. The subjects in the study group were reported to perform significantly better than those in the placebo group on learning and memory tests.

Expiratory apnea or Breath Holding Spells (BHS) is a condition affecting infants that is characterized by spells of involuntary breath-holding, usually during a stressful event that elicits crying on the part of the child. In one study, the frequency of (BHS) spells diminished significantly with iron supplementation. Children with this disorder who were given 5 mg of iron per kg of bodyweight each day for 16 weeks experienced 88% complete or partial improvement - compared with 6% in the placebo group.

Ortho•Iron contains SunActive®Fe iron, a registered form of iron that animal studies have shown to be more bioavailable than other more common forms of iron such as ferrous sulphate and sodium ferrous citrate. Ortho•Iron also contains lactoferrin, an iron carrying protein shown to improve blood iron and hemoglobin levels, and vitamin C a well known antioxidant which also improves iron absorption. Other nutrients such as vitamin B12, folate, vitamin B6 and copper were also included in Ortho•Iron to ensure other anemias related to those nutrients do not go untreated. SunActive®Fe is a highly stable form of iron that is less prone to oxidation than the iron found in other supplements.

recommended use
adult dosage : take 1 capsule daily with food or as  directed by a qualified health care practitioner. Take a few hours before or after other medications

SunActive®Fe is a registered trademark of Taiyo Internation Inc.

storage
keep dry and closed at normal room temperature between 15 - 22°C.
keep out of reach of young children : there is enough drug in this package to seriously harm a child.

contra-indication
taking a daily prenatal multi-vitamin/mineral supplement along with this product may result in constipation, diarrhea, and/or vomiting due to high intake of iron. Consult a health care practitioner prior to use if you are allergic to cow's milk/dairy products.
If pregnant, nursing, using any medication or if you have a medical condition, please consult a qualified health care consultant before using this product. Adult males and post-menopausal females should consult their physician before taking supplemental iron.
Special warning for parents to keep out of reach of children as accidental overdose of iron-containing products is a leading cause of fatal poisoning in children under the age of six. In case of an accidental overdose call a doctor or First Aid.