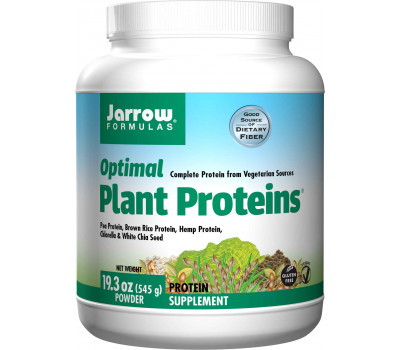 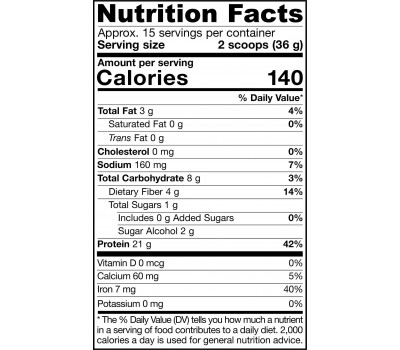 Jarrow Formulas Optimal Plant Proteins is a vegan source of proteins and fibers.

how does each active ingredient function in Optimal Plant Proteins?
Pea Protein, Organic Brown Rice Protein, Organic Hemp Protein, Golden Chlorella and Chia combine to supply a complete plant-based amino acid profile along with natural fibers.
Metabolin is a special blend of cell wall components and metabolites derived from the fermentation of beneficial bacteria, including Lactobacillus and Propionibacterium species.

background reading
Optimal Plant Proteins provides five different sources of protein-rich, Vegetable powders important for amino acid and fiber content as well as the presence of various nutrients. These nutrients vary by plant and provide one rationale for consuming protein from a breadth of sources.

Peas please
Peas are the seed-pods of Pisum sativum, a plant famed in scientific circles as Gregor Mendel’s, the father of genetics, vehicle to explaining the inheritance of traits. Yet peas, considered both a legume and a pulse, also deserve recognition for their high protein content. In fact, during the middle ages in Europe peas were one of the major sources of protein consumed. All pulses, however, are typically poor sources of the amino acid methionine and hence are not a complete protein. Legumes also possess noteworthy levels of amylose, a form of resistant starch that escapes human digestion but acts as food for beneficial bacteria.

Brown rice: newfoundly nice
Brown rice and white rice both derive from the same plant, Oryza sativa. Yet through no intrinsic fault, the brown variety was traditionally associated with poverty in Asia. However, modern revaluation of its attributes has led to an elevation in status.

For example, despite comparable protein levels, brown rice contains B vitamins, iron, magnesium, fatty acids, and fiber that are lost to white rice. This is caused by the removal of the husk, bran and germ layers from the raw grain in the production of white rice. In contrast, only the husk is removed in brown rice. Nevertheless, like most grains, rice is a poor source of lysine and is not considered a complete protein alone.

Heroic hemp
Plants of the Cannabis genus may be controversial to modern society because of the psychoactive properties of some of its members, but the nutritive value of hemp seeds is unequivocal. Possessing a fullspectrum of amino acids, hemp protein exists in easily digestible, non-allergenic form. The hemp plant is also a source of essential fatty acids, with the omega-3/omega-6 ratio often coming in at 3:1.

Chlorella’s promise
Chlorella, a genus of single-celled algae, is a complete protein containing 45% amino acid components by dried weight. It burst into the consciousness of the American public decades ago when it was touted as a means to avoid impending world hunger. Unfortunately, chlorella’s photosynthesizing efficiency was overstated and the difficulty in “farming” it underestimated. Other factors, such as a somewhat objectionable taste and algae cell walls that impeded the protein bioavailablity to humans, caused chlorella’s promise to fade. Some of these drawbacks have been overcome with Golden Chlorella, a more bioavailable, better-tasting form of chlorella protein. Aside from its protein content, chlorella has been suggested to contain heart-health components, as well as detoxifying and healing properties.

Chia: not just a pet
A staple food of the Aztecs, and even used by them as a form of currency, Salvia hispanica is native to what is now southern Mexico. By weight, chia seeds are about 1/3 omega-3 rich oil, 1/4 soluble fiber and 1/5 protein. Antioxidant components like flavonols, quercetin and chlorogenic acids are also typically found in chia seeds. So even though the traditional practice of growing chia sprouts on clay figures has become widely known via “chia pets,” chia is certainly worth consuming..

Metabolin: beneficial bacteria supernatant
One of the ways probiotics, and resident beneficial bacteria, are believed to benefit the body and the digestive tract is through the production of short chain fatty acids and other products of fermentation. Metabolin is essentially these constituents separated from the bacteria that produced them. It contains significant levels of acetic, propionic and lactic acids along with cell wall carbohydrate and peptide components.

recommended use
Add 2 scoops (35 g) of powder to 200-250ml water, fresh juice or your favorite beverage. For a protein smoothie, blend with water and ice and add juice or fruit to optimize taste.