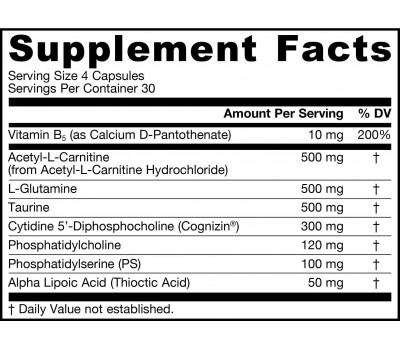 who can benefit from Neuro Optimizer?
Neuro Optimizer is for mature individuals who are concerned about their mental and emotional health. Given that cognition and memory begin to decline decades before maturity, Neuro Optimizer may also serve younger people, especially those with a family history of cognitive problems.

what distinguishes Neuro Optimizer?
• the most comprehensive and synergistic combination for brain health
• addresses all the problem areas that lead to age-related cognitive decline
• precursors for several key neurotransmitters

how do the active ingredients function in Neuro Optimizer?
• CDP choline (citicoline) is a building block for neurotransmitters that improve cognitive function as it is the essential intermediate for the synthesis of phosphatidylcholine, a major constituent of the gray matter of brain tissue (30%).
• phosphatidylcholine (PC) is a membrane lipid and precursor for acetylcholine
• phosphatidylserine (PS) is a membrane lipid shown to prevent cognitive decline, because it suppoorts the brain's physiological processing of sress and promotes neuronal communication by its effect on cell membrane fluidity.
• taurine is a multifaceted sulfur compound that improves nerve cell function by aiding in osmoregulation (maintenance of proper concentrations of ions) inside the cell
• alpha lipoic acid is a membrane antioxidant that promotes energy production
• acetyl-L-carnitine is a mitochondrial antioxidant that promotes energy production, especially fatty acid metabolism
• glutamine is a precursor to GABA and to glycogen for immediate energy needs

Neuro-Optimizer is a safe, natural way to enhance brain metabolism and cognition without the use of stimulants.

Optimizing cognition and preventing cognitive decline are best accomplished when all performance problems are addressed. The brain is poorly capable of self-repair, so it must be protected from free radical damage. It is also energy demanding, and requires stable sources of energy. The brain’s constant “switching” and “signalling” depend upon regulation of neuronal membrane excitability and osmolarity (cell pressure).

CDP choline and phosphatidylcholine (PC)
CDP choline (cytidine 5’-diphosphocholine or citicoline) donates choline for phosphatidylcholine synthesis, to form the neurotransmitter actetylcholine. CDP choline activates brain mitochondrial and Na+/K+ ATPases to improve blood flow and neuroimmune responses. CDP choline has been tested in clinical trials for memory and cognition as well as for recovery from injury, stroke and cerebrovascular disease.

CDP Choline is well absorbed and bioavailable when given orally. It is then reduced to its component parts (cytidine and choline), which are incorporated into membranes and microsomes in the central nervous system. Administration of CDP Choline in animals increases phosphatidylcholine, noradrenaline, acetylcholine and dopamine levels. Enhanced phospholipid biosynthesis increases cerebral metabolism and neurotransmitter activity. Neuro Optimizer also includes preformed phosphatidylcholine to promote these effects.

Acetyl-L-carnitine (ALC)
Acetyl L-carnitine, a delivery form of L-carnitine, is involved in many metabolic functions. As an antioxidant, ALC may have neuroprotective activity. It supports energy production by transporting fatty acids in and out of mitochondria. Acetyl L-carnitine can also act as a critical component in the biosynthesis of the neurotransmitter acetylcholine.

L-glutamine
Glutamine, the most abundant amino acid, is a precursor to the neurotransmitters glutamic acid and gamma amino butyric acid (GABA). It is a precursor to glycogen production for energy storage. In clinical trials, glutamine improved brain electrical patterns when compared with controls.

Alpha Lipoic Acid (ALA)
Alpha Lipoic acid is a powerful antioxidant and cofactor in energy production. It augments insulin action and is a cofactor in glycolysis, a process that converts sugar into energy. ALA has been shown to improve brain energy metabolism.

Taurine
Taurine is a sulfur-containing amino acid derivative with numerous diverse biological functions, including regulating cell growth, stabilizing cell membranes, acting as a minor insulin mimic and improving neurotransmission. It also serves as an antioxidant and helps regulate the concentration of ions within cells. Taurine has been shown to facilitate nerve blood flow, motor nerve conduction, and nerve sensory thresholds in diabetic neuropathic rats. It is also used as a calming agent.

Neuro Optimizer may be the natural answer to improving brain function and preventing mental decline. Neuro Optimizer feeds and protects the brain with its comprehensive combination of safe and effective nutrients.

There is a growing interest, as well as a booming industry, in the use of testosterone therapy for middle-aged and older men. This interest has led to the definition of a new condition, termed 'andropause' implying that this condition is due to falling levels of testosterone. This trend risks replicating both the rejuvenation fads of a century ago and the recent experience in estrogen therapy for menopause that has been propelled for decades by advocacy substituting for reliable scientific evidence. Is testosterone therapy appropriate for men with symptoms of male menopause? There is no scientific agreement on this topic.
But it stands to reason that hormones should be used only as a last resort since they have serious risks if misused.
Read more
Six reasons why eggs are awesome superfoods

Lipids and more specifically phospholipids, are especially crucial to the health of both cell membranes and neurotransmitters.
Read more
Nootropics, what are they and how do they work?

Uridine is a nucleotide that acts as a precursor of brain synapses and membrane phospholipids in conjunction with the omega-3 fatty acid docosahexaenoic acid (DHA) and choline sources. It may enhance some brain cholinergic functions.
Uridine also supports the health and function of liver mitochondria.
Read more
Declutter your life and feel liberated!

Declutter your life and feel liberated!

Have you ever looked around in your house upon coming home with a new purchase, to discover you can't find a suitable spot to put it away? Your new fancy mug can't be put up in the cupboard, because it is chockful of mugs and lovely tea cups already. Your new fancy dress can't be hung in the wardrobe as ther's no space left. Sounds familiar, huh?
Read more
Seize the day, crack an egg?

In the past week, a discussion started between a dietician-foodie and a paleo/fitness-foodie, who embraced eating eggs without really giving a lot of arguments. The dietician wrote a critical article (in Dutch) to show the flaws of that bold statement.
Read more
Memory training

Do you tend to forget details more easily than before? Here are tips to stay ahead of the memory game.
Believe in yourself: if you believe to have a poor memory, you will unconsciously not make enough effort and as a result, fulfill the prophecy.
Read more
Please pass my smart drugs ...

recommended use
Take 4 capsules per day with juice or water between meals or as directed by your qualified health care consultant.