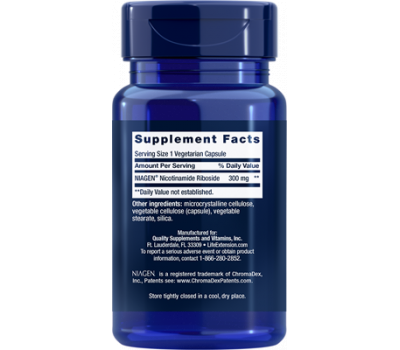 Who can benefit from NAD+ Cell Regenerator
Adult men and women seeking to support optimal mitochondrial function and maintain cellular health to protect against stressors and deleterious effects associated with aging, may benefit from Nicotinamide Riboside.

what distinguishes NAD+ Cell Regenerator 300mg
• promotes the generation of new mitochondria
• supports longevity, endurance, healthy metabolism, healthy aging and more
• increases cellular NAD+, thus mimicking the benefits of caloric restriction
• naturally occurring Vitamin B3 metabolite
• a single serving of 100 mg of nicotinamide riboside can raise levels of NAD+ in human blood plasma by as much as 33% at 8 to 24 hours post-ingestion

background reading
NAD+ Cell Regenerator (Niagen®) with nicotinamide riboside is a highly efficient, naturally occurring vitamin B3 metabolite whose range of aging-related health benefits are legitimizing its moniker as a “fountainof youth.” Recent research has shown that the mitochondria, the cell’s powerhouse, not only plays an essential role in converting nutrients into energy, it also holds a key to human health and longevity when in the presence of ample amounts of the cellular co-factor, NAD+. Nicotinamide riboside works by promoting optimal levels of NAD+ and thus supports youthful mitochondrial function, longevity, healthy aging and more.
Discovered in 2004 by Dartmouth Medical School researchers Dr. Charles Brenner and Dr. Pawel Bieganowski, Jarrow Formulas’ Nicotinamide Riboside contains the first patented and only commercially available nature-bioidentical NR, a natural NAD+ precursor.

Nicotinamide riboside and the mighty mitochondria: turning back the cellular clock
When intracellular levels of NAD+ drop with advancing age, normal nuclear-mitochondrial communication becomes disrupted. Conversely, raising levels of this important co-factor has been shown to restore mitochondrial function to that seen in young cells by increasing levels of SIRT1, a protein nicknamed the “longevity gene.”* Research has shown that increases in sirtuin activity (a caloric restriction mimetic) indeed convey numerous metabolic health benefits and support longevity.
These unique NAD+-dependent enzymes govern a variety of physiological pathways, offering protection from metabolic decline, undesirable cardiovascular and cellular changes, and neurocognitive decline; they have also been found to support circadian rhythms in peripheral tissues and longevity.

Maximizing levels of NAD+ with NAD+ Cell Regenerator
NAD+ levels are known to drop both with age and lifestyle choices such as overeating and inadequate exercise.
While consuming vitamin B3 as niacin has not been shown to be an effective method of enhancing NAD+ body levels (B3’s metabolite, niacinamide, may inhibit sirtuins), in the first clinical trial of 12 healthy adult subjects, single 100 mg, 300 mg and 1 gram amounts of NR were shown to increase blood plasma levels of NAD+. Just a single serving of 100 mg of nicotinamide riboside can raise levels of NAD+ in human blood plasma by as much as 33% at 8 to 24 hours post-ingestion.

Healthy mitochondrial function
Increasing the supply of nicotinamide riboside in mammalian cells has also been shown to activate genes related to enhanced oxidative metabolism and protection against high-fat diet-induced metabolic changes, indicating its utility for ameliorating metabolic and age-related disorders, and to improve generation of mitochondria in muscle tissue.
In an animal study that gave 400 mg/kg/day of NR, or a chow diet for two groups of mice, nicotinamide riboside prevented the development of mitochondrial structural abnormalities, enhanced lipid oxidation in brown adipose tissue and liver and supported SIRT1 activation.

Promotes normal blood glucose metabolism
Nicotinamide mononucleotide (NMN), a close relative of nicotinamide riboside, administered at 500 mg/kg body weight/day to high fat diet-fed mice with an impaired blood sugar response has been found to support normal levels of glucose in female mice. High fat diet fed mice supplemented with nicotinamide riboside have also been shown to maintain a healthy weight, better utilize fatty acids (oxidation) for energy, and have improved insulin sensitivity. In a study of 19 volunteers given  in a fasting/refeeding study, nicotinamide riboside activated sirtuins which support normal levels of inflammation, mimicking an effect previously thought to be achievable only by intermittent fasting.

recommended use
take 1 capsule per day with water prior to breakfast or in between meals on an empty stomach or as directed by your qualified healthcare professional.

storage
store in a cool, dry polace
keep out of reach of young children