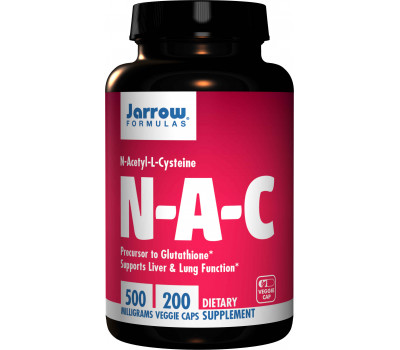 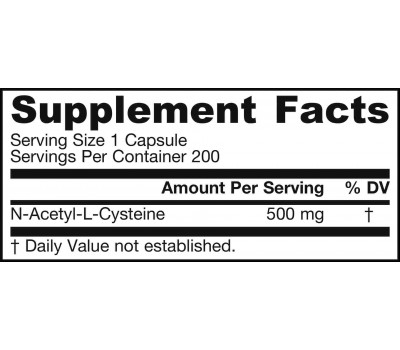 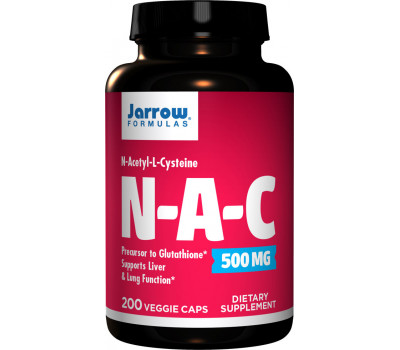 Jarrow Formulas NAC 500mg 200 capsules with N-Acetyl L-Cysteine, a sulfur amino compound which plays an all important role in the production of the body dominant and essential antioxidant Glutathione. Optimal Glutathione levels are important for a healthy immune system and the cell defense against viral infections.

NAC's primary efficacy is shown when it is needed to regenerate glutathione after overdoses of certain NSAIDs like aspirin or acetaminophen which may lead to a depletion of liver glutathione stores. The more stress is placed on the liver, the faster this may lead to a dysfunctional liver and cause death.

People who cough up a lot of sputum know NAC as an agent capable of reducing the sulfur found in mucus and break it down to a more liquid form.

In athletic circles NAC is widely used as an anti-oxidant. Some athletes claim to perform better with NAC supplementation than without. Plausibly caused by the vasodilating effects of acetylcysteine. But NAC supplementation has further use as it has shown to slow down platelet aggregation.

N-Acetyl Cysteine is a better alternative than cysteine which can be obtained from dietary sources like egg whites or dairy products. Simply due to the fact that it is rapidly absorbed from the gut and finds its way to the liver and other areas in the body where L-cysteine is needed. It also works twice as long in the body than just dietary cysteine.

NAC - a better source of L-cysteine
N-acetyl-L-cysteine (NAC) is a stable form of the amino acid L-cysteine. NAC is cysteine that has been modified with an acetyl group, which stabilizes and increases the bioavailability of many compounds (e.g., aspirin, omega-3 fatty acids). In enzymes, cysteine interacts with iron and zinc to regulate processes associated with respiration, energy production, immune surveillance and repair functions in all tissues.

L-cysteine is a sulfur-containing amino acid that can be produced by the body from the essential amino acid methionine. However, inadequate methionine in the diet, low selenium intake, chronic disease, and advancing age reduce the body’s ability to convert methionine to cysteine. Likewise, stress and environmental toxins may increase the need for cysteine beyond the body’s capacity for conversion. NAC is preferred to L-cysteine as a supplement because of its stability and solubility.

Glutathione: Cleansing & Protecting the Body
NAC supplies readily available L-cysteine, which acts as an antioxidant itself or as a precursor to glutathione. Glutathione is one of the body’s most important and abundant antioxidants and detoxification agents. Making cysteine more available to the body in the form of NAC encourages the production of glutathione.

As an antioxidant, cysteine acts as an electron donor and acceptor to neutralize uncontrolled free radicals without becoming reactive or toxic itself. This is also one aspect of its functionality as a constituent of glutathione. For example, the transformation of superoxide or peroxide to water requires glutathione to be oxidized. Then, enzymes in the body reactivate oxidized glutathione, so it is ready to scavenge yet more free radicals.

Glutathione is a critical Phase II detoxification agent, meaning glutathione attaches to lipid-soluble toxins to make them more easily excreted from the body. One example of this is acetaminophen metabolism in which the metabolite N-acetyl-p-benzoquinone imine (NAPQI) is conjugated by glutathione. But, when glutathione levels are depleted, NAPQI damages liver cells. It is important to note that in hospital practice, NAC is given rather than reduced glutathione to support blood levels of glutathione.

Bolstering the Liver
Cysteine, both alone and as a component of glutathione, can neutralize a class of chemicals known as aldehydes, which are encountered in air pollution and produced upon the metabolism of some drugs and alcohol in the liver. NAC is, therefore, important for maintaining the body’s antioxidant defenses in the face of everyday assaults.

One aldehyde in particular, acetaldehyde, has been associated with the symptoms of “hangover.” In fact, a decreased ability to metabolize acetaldehyde to acetic acid causes the facial flush and negative physical symptoms some are prone to when drinking. The sulfhydryl group of NAC directly conjugates acetaldehyde, helping to protect glutathione levels and glutathione enzymes that normally deteriorate after ingesting alcohol. The direct antioxidant action of NAC has also been implicated in protection from the alcohol-induced increase in lipid peroxidation and inflammation that is also associated with hangovers and other ill-effects of alcohol overuse.

NAC is routinely used in hospitals as an antidote to the pain reliever acetaminophen, particularly when ingested with alcohol, or taken in excessive amounts. Acetaminophen poisoning is one of the most common cause of calls to poison control centers in the United States. It causes severe damage to the liver, much the same as that caused by the toxic mushroom Amanita phalloides . NAC supports the health of liver tissue by replenishing liver glutathione levels.

Guarding the Lungs
NAC is also thought to offer benefits to respiratory health. Most commonly, it thins mucus that can accumulate in the mouth and throat by breaking the sulfur-sulfur bonds in proteins that impart viscosity to phlegm and mucus. But perhaps more importantly, research suggests that NAC can modulate immune and inflammatory responses to help protect the lungs when they come under assault.

N-acetyl-L-cysteine (NAC) is a powerful antioxidant amino acid and a precursor in the body to the critical antioxidant glutathione. Glutathione exerts a variety of protective effects, including detoxification and intracellular defense against oxidative stress. Substances known to reduce glutathione status are acetaminophen and alcohol.

recommended use
take 1 capsule 1 or 2 times per day or as directed by your qualified health care consultant.

contra-indications and warning
Prolonged or elevated intake may alter liver function tests without affecting actual liver function. Inform your physician that you are ingesting NAC if you undergo liver function tests.
If you have a medical condition, are pregnant, lactating, trying to conceive, under the age of 18, or taking medications, consult your healthcare professional before using this product.