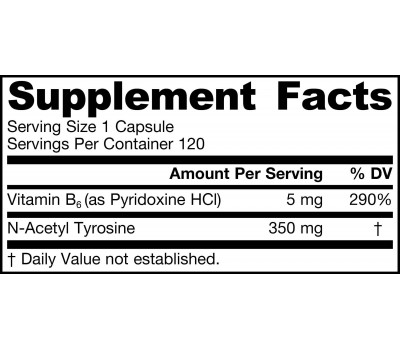 Jarrow Formulas N-Acetyl Tyrosine is an acetylated form of the amino acid L-Tyrosine. Ordinary Tyrosine is just not stable enough. This acetyl form support brain function by improving the synthesis of catecholamines, norepinephrine and dopamine.
Having too low dopamine levels will result in poor performance and fatigue. Since tyrosine raises dopamine levels, it works as a natural antidepressant. As an acetylated and more stable form of tyrosine, N-acetyl-tyrosine is the better choice for supplementation.

A powerful amino acid with many benefits
Tyrosine is an important precursor to thyroid and adrenocortical hormones as well as to the brain neurotransmitters dopamine, epinephrine and norepinephrine. In lieu of tyrosine intake from dietary sources, phenylalanine is utilized for its biosynthesis along with necessary cofactors iron, vitamin C and niacin. Since tyrosine can be made by the body it is not considered an “essential amino acid,” per se, but it is essential to the body’s proper functioning.

The thyroid hormones triiodothyronine (T3) and thyroxine (T4) are derived from tyrosine. Tyrosine readily passes the blood brain barrier however it competes with other amino acids for entry into the brain.
Tyrosine plays an important role in cell signaling by regulating many cellular processes via tyrosine kinase receptors (including sensitivity to insulin). Tyrosine is also the precursor to the pigment melanin, which is used by the body in UV radiation protection. There is also some recent evidence that suggests melanin may act as a powerful chelating agent in the body helping sequester toxic heavy metals.

Tyrosine content varies greatly in foods. In general, meats contain higher concentrations than vegetables or grains, with wheat germ being the exception to that rule. As a precursor for excitatory neurotransmitters, tyrosine is an important reserve in the body’s response to stressful conditions.
In studies performed at MIT, animals given extra tyrosine were better able to control stress and avoid depression; human trials with soldiers undergoing intense physical training bolstered these results.

Tyrosine and mood
Sadness and discouragement are natural responses to disappointment or loss. Nevertheless, in our modern society mood is often out of kilter due to diet and lifestyle imbalances.It is common for depressed people to have diets inadequate in vitamins, minerals and protein while being high in refined carbohydrates. Intake of excessive caffeine (about five cups of coffee) can also be associated with mood swings.

Tyrosine and brain metabolism
As we age, brain dopamine production declines. A marked deficiency of dopamine in the basal ganglia may result in uncoordinated movement, improper reflex responses, stiffness of gait and other motor problems. This may be due to decreased levels of antioxidant enzymes, resulting in toxic hydrogen peroxide accumulation that is produced during normal dopamine metabolism.
Elevated hydrogen peroxide brain levels may then accelerate destruction of the substantia nigra, a brain region in the basal ganglia responsible for dopamine production. Tyrosine may provide nutritional support in the brain’s response to falling dopamine levels.
Aside from assisting in coordination and tissue repair (by aiding growth hormone release), dopamine promotes the “pleasure” response to activities like eating and sex. One hypothesis posits that overeating may be due to poor dopamine production in the brain.

Indications of tyrosine deficiency
Tyrosine plays an important role in cell signaling by regulating many cellular processes via tyrosine kinase receptors (including sensitivity to insulin). Tyrosine is also the precursor to the pigment melanin, which is used by the body in UV radiation protection. There is also some recent evidence suggesting that melanin acts as a powerful chelating agent in the body, as it helps to sequester toxic heavy metals. Tyrosine deficiency may cause edema, weakness, impaired liver function and loss of muscle or other tissues.
Low protein diets may produce marginal deficiency states.

N-Acetyl Tyrosine is an acetylated derivative of the amino acid L-tyrosine. Ordinary L-tyrosine is less stable and also less soluble in water, which may result in reduced bioavailability. Acetylation enhances the solubility and stability of certain amino acids.

Jarrow Formulas N-Acetyl Tyrosine also contains vitamin B6 to promote the conversion of tyrosine to neurotransmitters and hormones in the body.

Read more
Nootropics, what are they and how do they work?

Nootropics is the accepted term for substances that enhance learning and memory function.
Nootropics work in various ways depending on the characteristic of the substance.
Some work by enhancing oxygen transport to the brain, an improved energy turnover in the brain, better neurotransmitter availability, or enhancing the creation of other substances that influence brain activity.
Read more