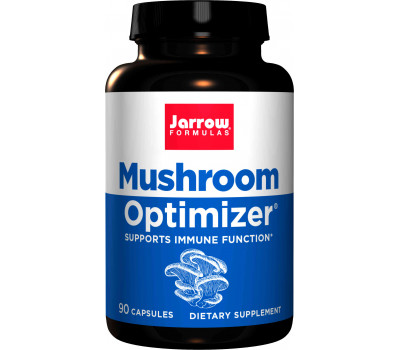 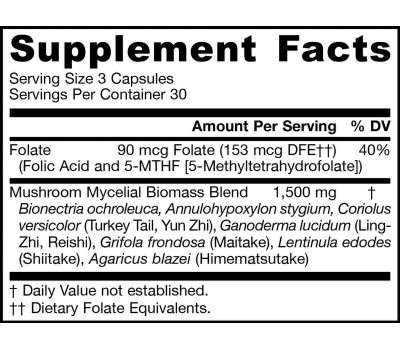 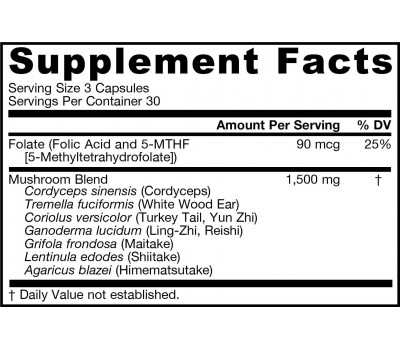 who benefits from Mushroom Optimizer?
Mushroom Optimizer is formulated for individuals looking to rebalance their immunity and boost their body's ability to safeguard against environmental toxins. Also, for those who wish to bolster vital organ funtion.

background reading
The health-promoting aspects of these mushrooms are supported by both traditional wisdom and modern science.

Mighty Mycelia
Mushroom Optimizer mushrooms are harvested during the mycelia stage, or early growth period in its life cycle, when its active compounds are most concentrated. Jarrow Formulas blended mushroom formulation offers more wide-ranging immune stimulation than is found in any singular mushroom product.
Mushroom Optimizer provides a spectrum of activity from 7 different mushrooms. Having developed in different environmental niches, each mushroom promotes different immune defenses.

Start with the best ingredients
Not all mushroom products are created equal. Mushroom Optimizer species are drawn from specially selected mushroom cultivars. Selected strains are cultivated in California under stringent conditions, grown under aseptic and controlled environments on organic brown rice, and processed with care. The result is uniform quality from batch to batch. No artifi cial additives or processing is involved. During cultivation, folic acid is added to support immune health and is reduced to its biologically active, methyl-donor form found in foods.
These folic acid derivatives are important in multiple processes within the body, including the synthesis of DNA and the conversion of vitamin B12 into an active coenzyme form.

Traditional wisdom/modern science
Traditional Chinese Medicine has long claimed that the Qi or life force can be supported by ingestion of special foods. Certain mushrooms are considered to be amongst the greatest and most potent sources of Qi. Through the careful combination of mushrooms, the health of the inner organs can be supported. Modern science strongly supports many of these traditions. Much of the physiological activity of mushrooms is in the polysaccharides that these fungi produce. Mushroom polysaccharides are long-chain sugars or fibers that activate immune cells on the intestinal walls, which sends a variety of signals to cells and organs throughout the body.

Lentinula edodes (Shiitake): Contains lentinan, a large polysaccharide from the cell wall of either the fruiting body or mycelium. It can increase the phagocytotic (engorging) activity of macrophages and activates NK cells in vitro; it possesses antiviral, antibacterial and antiparasitic properties.

Cordyceps sinensis (Cordyceps): Contains unbound and protein- bound polysaccharides. Among its many functions, it can support proper cholesterol metabolism, increase HDL (high-density lipoprotein or good cholesterol), and promote smooth muscle relaxation. It buttresses lung and kidney function by reinforcing Qi, or functional energy, of these organs..

Tremella fuciformis(White Woodear): contains unbound and protein- bound polysaccharides and triterpene carboxylic acids to enhance cell and humoral immunity. It promotes sustained energy levels, enhances blood circulation, strengthens the heart, nourishes the yin of the stomach and invigorates the brain.* It is also a Qi tonic.

Agaricus subrufescens (Blasei): is popular in Japan as an immunomodulator and its polysaccharides stimulate T-cell subsets.