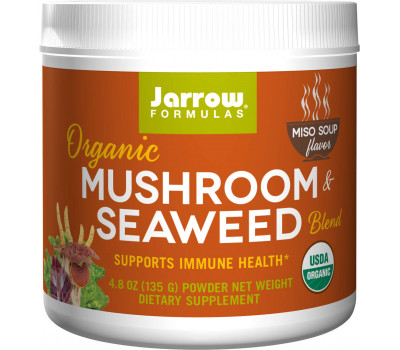 Discontinued, we refer you to Mushroom Optimizer

Jarrow Formulas Organic Mushroom & Seaweed Blend is a miso soup with a variety of organic mushroom concentrates and seaweed, turmeric and ginger root.
Mushrooms are a source of polysaccharides for immune support.
Atlantic-harvested seaweed provides iodine for thyroid and immune support.

Organic Mushroom & Seaweed Blend combines mushroom mycelia and 4:1 concentrates of cordyceps and reishi with seaweed and warming spices to provide a range of characteristics and properties including polysaccharides for immune support.


The health-promoting aspects of the mushrooms are backed by both traditional wisdom and modern science. These properties are supported by a blend of organic marine algae. The thyroidassociated nutrient iodine is found abundantly in sea vegetables and plants. Indian traditional spices ginger and turmeric add antioxidant acitivty.

Mushroom Mycelia
Organic Mushroom & Seaweed Blend mushrooms are harvested during the mycelia stage, or early growth period in its life cycle, when its active compounds are most concentrated. This blended mushroom formulation offers more wide-ranging immune stimulation than is found in any singular mushroom product with a spectrum of activity from 4 different mushrooms. Having developed in different environmental niches, each mushroom promotes different immune defenses.

Start With the Best Ingredients
Not all mushroom products are created equal. Organic Mushroom & Seaweed Blend species are drawn from specially selected mushroom cultivars. Selected strains are cultivated in California under stringent conditions, grown under aseptic and controlled environments on organic brown rice, and processed with care. The result is uniform quality from batch to batch. No artificial additives or processing is involved.

Traditional Wisdom/Modern Science
Traditional Chinese Medicine has long claimed that the Qi or life force can be supported by ingestion of special foods. Certain mushrooms are considered to be amongst the greatest and most potent sources of Qi. Through the careful combination of mushrooms, the health of the inner organs can be supported. Modern science strongly supports many of these traditions. Much of the physiological activity of mushrooms is in the polysaccharides that these fungi produce. Mushroom polysaccharides are long-chain sugars or fibers that activate immune cells on the intestinal walls, which sends a variety of signals to cells and organs throughout the body.

Cordyceps sinensis (Cordyceps): contains unbound and proteinbound polysaccharides. Among its many functions, it can support proper cholesterol metabolism, increase HDL (high-density lipoprotein or good cholesterol), and promote smooth muscle relaxation. It buttresses lung and kidney function by reinforcing Qi, or functional energy, of these organs

Roles for Iodine: Sea Vegetables as Sources
Iodine is a health-promoting trace element essential for life. Its primary biological role lies in the production of the thyroid hormones triiodothyronine (T3) and thyroxine (T4). The thyroid gland actively absorbs iodide from the blood to make and release these hormones into the circulation. Beyond its nutritional role in hormone production, iodine deficiency may be implicated in poor immune response as correlated with impaired thyroid function.

The National Health and Nutrition Examination Survey (NHANES) data show that urinary iodine levels in Americans have plummeted since the 1970s. Surprisingly, more health-conscious individuals often are the most likely to develop low iodine levels. Athletes and those otherwise engaged in heavy physical effort deplete their natural stores of this trace mineral through perspiration. Vegetarians have greater likelihood of low levels of iodine than meat consumers because foods of plant origin are less rich in iodine than are animalderived foods. In fact, one study found iodine deficiency in 25% of vegetarians and in 80% of vegans.

US commercial salt makers long have added iodine to salt. However, with recent concerns associated with eating too much table salt, there is a dilemma of where to get healthful sources of iodine. Iodine is found abundantly in sea vegetables and plants. In areas where no marine foods are eaten, people have lower iodine levels.

As we transition from summer into autumn, our thoughts automatically go to walks in the forest to enjoy the beautiful foliage and by consequence to the many beautiful mushrooms that flourish in this moist yet warm season.
There's a good reason mushrooms are so popular in nearly every world cuisine.

While low in carbohydrates and calories, mushrooms are a great source of B-vitamins, trace minerals, fiber and even offer some protein.
But mushrooms offer more, they have anti-inflammatory properties and contains high levels of beta-glucans that keep immune cells alert, plus a powerful antioxidant called ergothioneine that helps lower body-wide inflammation.

The medicinal use of mushrooms has a very long tradition in Asian countries that dates back thousands of years. Although their use in the Western Hemisphere only started increasing in the past several decades, numerous recent studies show that they are vital, biologically active compounds with significant benefits to health.

Many people suffer from gallstones. While it's possible to have gallstones and not know it, severe cases can lead to rupturing of the gallbladder and even death. Understanding your gallbladder and naturally supporting it with the right nutrition is imperative for good health.
Read more
Usefulness of herbal medicine in modern times

Today, plants are being used to treat a number of health concerns and conditions, including allergies, arthritis, migraines, fatigue, skin infections, wounds, burns, gastrointestinal issues and even cancer, proving that it’s true that food is medicine. These herbs are less expensive and they’re a safer means of treatment than conventional medications, which is why so many people are choosing to go back to this traditional idea of medicine.
Read more
Why is turmeric such a magical herb?

Why is turmeric such a magical herb?

Recently, it became once again evident how mainstream media is being manipulated by Big Pharma to scare the public away from using well-known and empirically proven supplements towards using pharmaceutical medicine.
One such health scare tactic was aimed towards the use of curcumin, which has become one of the most popular health supplements , among which to support people recovering from breast cancer.
Apparently, one effect of curcumin is that it speeds up detoxification processes in the liver, which results in medicine being broken down more easily.
In this particular health scare, that's an undesirable side-effect because tamoxifen, a frequently used post-treatment drug, is also broken down more rapidly and hence, becomes less effective at lower dosages, when combined with high dosages of curcumin.

While this was touted as proof how dangerous it is to take unproven herbal supplements, this is nothing out of the ordinary. Many other products can speed up the liver detoxification process, with the most famous of them being the mood-enhancing herb St. John's Wort.
However, there are other products that do the contrary, among which grapefruit as well as green tea , which slow down the same detoxification liver enzyme.

Some of you may not be aware yet why both turmeric and curcumin have become such popular condiments as well as food supplements. Therefore we present you a breakdown on what curcumin is about.

Read more
What foods deserve the name 'superfoods' and why?

What foods deserve the name 'superfoods' and why?

Many different foods have been touted as superfoods over the past few decades and undoubtedly many more will come.
Why are we all so focussed on superfoods? Secretly, we all hope for the miracle natural 'drug' to cure or prevent heart diseases and other degenerative diseases, especially when it can compensate for other bad habits, such as smoking, drinking too much alcohol, not sleeping enough and moving too little.

In order to do away with the hype of it all, we at Pasio decided to get rid of the category of 'superfoods' and merge all edible products (fats, proteins and superfoods) into one major category called 'nutrition'.
While there is no official legal definition of superfoods, this doesn't mean there isn't a scientific basis for calling a food “super.”

According to nutritionists, a superfood is the type of fruit and veggies that packs a lot of micronutrients into each calorie and is linked with a reduced risk of chronic disease. Studies also suggest that people who eat more of them tend to be thinner and live longer than those who rarely or never eat them.
However, what type of micronutrients these are , is up for debate.
Read more
What are free radicals?

Yet, free radicals are essential to life. The body's ability to turn air and food into chemical energy depends on a chain reaction of free radicals. Free radicals are also a crucial part of the immune system, floating through the veins and attacking foreign invaders.
Read more
Magical turmeric

Turmeric (Curcuma longa) is a spice grown in India and other in tropical countries in Asia . This spice has been part of religious ceremonies in India for thousands of years. Turmeric is related to ginger with which it shares some of its active ingredients.
Read more
How to prevent hay fever

How to prevent hay fever

It is that time of year again when we are hit most with hay fever attacks. Hay fever is caused by flowers, grasses and trees that rely on wind for pollination and shed pollen in large amounts.
Up to 30% of people in European countries suffer from one type of hayfever or another, which means they get an allergic reaction to some type of pollen, with the most common one causing problems being birch and grass pollen. As most birch pollen is produced in April and grass pollen season starts in May, both April and May can be called 'hay fever' months.
Read more

recommended use
Mix 1 scoop (4.5 g) with 200ml warm or hot water or as directed by your qualified healthcare professional.

vegetarians/vegans
Suitable for vegetarians and vegans