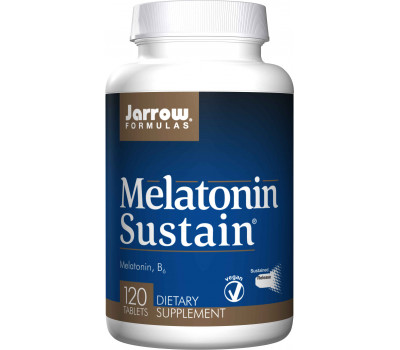 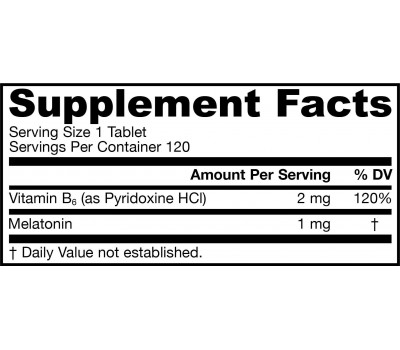 Jarrow Formulas Melatonin Sustain contains melatonin, the hormone that is secreted by the pineal gland that aids biorhythm regulation. Biorhythm is disturbed by stress, crossing time zones and changing work shifts or even just the transition into and out of daylight saving time. Melatonin production also declines with age.

who may benefit from taking melatonin?
those that work in shifts or travel across time zones

what distinguishes Melatonin Sustain from other similar products?
Melatonin Sustain has a safe dose of melatonin and also contains vitamin B6 and magnesium for an even higher effectivity.
It also is produced as a sustained release tablet, so will be released slowly over time after ingestion.

background reading
Millions of Americans suffer from sleep difficulties, spending a fortune on sleeping pills despite side effects. Yet sleep problems can often be traced to by-products of modern life. Caffeine, alcohol and sedentary lifestyles have an impact, but so do light and other forms of electromagnetic radiation.

The production of melatonin by the human body falls and rises with the light-dark cycle in the environment. In fact, melatonin acts like a metronome, keeping time with the sun and allowing “scheduling” of physiological processes. This timekeeper role is the reason why melatonin is often referred to as a “chronobiotic.” Jet-lag is the most common way of understanding this experientially. But the impact of melatonin on sleep is just one aspect of this amazing molecule.

First, although melatonin possesses excellent oral bioavailability, it has a very short half-life (15-45 minutes) once it reaches the bloodstream. Together, this leads to blood levels that can be hundreds or thousands of times higher than produced by natural secretion, even when consuming only a few milligrams, and then those spiked levels drop off quickly. Melatonin Sustain overcomes these limitations with timely, balanced melatonin release along with vitamin B 6 to support melatonin metabolism.

The Sleep Regulator
Supplementation with melatonin is known to reduce sleep latency, or the time required to fall asleep. In addition, some people report improvement in feelings of sleep quality when taking melatonin. Under normal circumstances consuming melatonin 30-90 minutes before bedtime advances sleep phase and promotes sleep.

But melatonin may also prove useful for occasional sleep difficulties secondary to other causes related to mood, mental-health, age, and hospitalization. In fact melatonin is one of the few dietary supplement ingredients that has been researched with some rigor in children experiencing sleep difficulties, including those experienced as side effects of attention-hyperactivity stimulant medication.

An Electromagnetic Transducer?
Anybody that has experienced jet-lag once too often or who has had to work 3rd shift for an extended period of time is probably familiar with the effects of light on sleep patterns and the relevant, researched benefits involved in adjusting the sleep phase with melatonin. But less well-known is the potentially effects caused by night-time illumination. Since melatonin levels are tied to the amount of light sensed by the retina, high-intensity light after sunset can impact melatonin levels. Even low level light during our sleep periods can also affect our melatonin production.

Melatonin Biochemistry
Melatonin is produced biosynthetically from tryptophan and is one of the reasons that tryptophan can help promote sleep and relaxation. Vitamin B 6 is cofactor in this enzymatic pathway, including the process of tryptophan decarboxylation. Although melatonin is synthesized in the pineal gland, a small endocrine gland shaped like a pine-cone that is found between the hemispheres above the brain- stem in vertebrates, it is also produced in the retina, bone-marrow, gall bladder, and gastrointestinal tract.

Melatonin’s cyclic changes track and impact other physiological cycles, such as cortisol levels and body temperature. Body temperature seems to be modulated by direct action on the hypothalamus. Action on the hypothalamus is also implicated in effects on the cardiovascular system and blood pressure seen with melatonin. Melatonin is also intimately involved with the immune response, inflammatory cascades, and the health of the intestinal tract.

Melatonin Sustain provides melatonin and a key cofactor (vitamin B 6 ) essential for the biosynthesis of melatonin. Due to an extremely short half-life in blood, melatonin that is released over time in the intestines supports sustained melatonin levels and helps avoid melatonin spikes.

recommended use
take 1 or 1/2 tablet 20 to 30 minutes prior to bedtime or as directed by your qualified health care consultant.

warning and contra-indication
warning: Do not drive or operate machinery immediately following use of this product.
If you have a medical condition (especially asthma, MS, lymphoma, leukemia, diabetes, epilepsy, or autoimmune disease), are pregnant, lactating, trying to conceive, under the age of 18, or taking medications (especially MAO inhibitors such as iproniazid), consult your health care practitioner before using this product