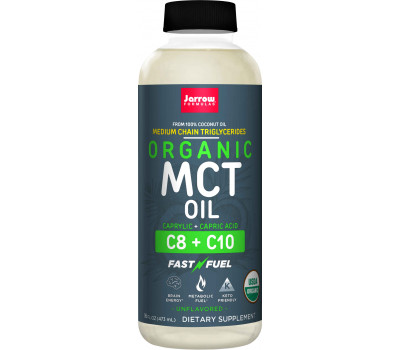 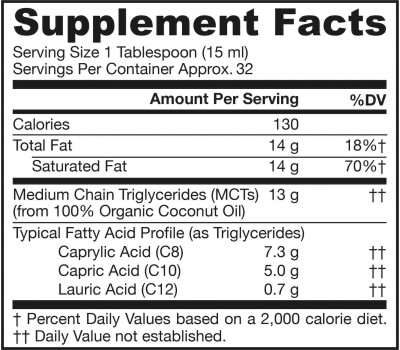 • quick energy for the brain
• fast metabolic fuel for muscles
• support for a low-carb, ketogenic diet

Jarrow Formulas’ MCT Oil is an odorless, neutral tasting, all-natural source of caprylic (C8:0) and capric (C10:0) MCFAs as triglycerides derived from coconut oil. Triglycerides comprised of caprylic and capric MCFAs are easily digested and absorbed, and primarily transported directly to the liver where they are extensively oxidized within the mitochondria of liver cells for energy and promote the generation of ketones (i.e., ketogenic). Ketones readily cross the blood brain barrier to serve as the only alternative fuel source to glucose for the brain as well as serve as a fuel source to other tissues including heart and skeletal muscle. Substitution of longchain triglycerides (LCTs) with MCTs may support body weight and composition management due to modest enhancement of energy expenditure and reductions in food intake.

MCT Oil ≠ Coconut Oil
Coconut oil is the richest natural source of MCTs, but only provides ~8 - 15% caprylic and capric MCFAs. The predominant fatty acid in coconut oil is 12 carbon long lauric acid (~45 - 78%). Although sometimes referred to as a MCFA, lauric acid behaves more like LCFAs in the body. These distinct chemical and physical properties impact the way MCFAs are absorbed and metabolized, thus accounting for their unique metabolic effects compared to LCFAs.

“Fast” Energy & Ketogenesis
MCTs are very easy for the body to digest and unlike LCFAs, do not require bile acids to facilitate digestion and absorption. MCFAs are more soluble in aqueous solutions (e.g., biological fluids) than LCFAs and are primarily absorbed along with other water-soluble nutrients into portal circulation for direct transport to the liver, where they are extensively oxidized as a source of energy and support ketone formation. Thus, there is greatly reduced deposition of MCFAs into fat tissue for energy storage. In contrast, once absorbed, poorly watersoluble LCFAs are re-esterified into triglycerides for incorporation into chylomicrons, a type of lipoprotein that transports ingested fatsoluble nutrients, and transported via the lymphatic system to the general circulation, allowing for extensive uptake into fat tissue. Due to energy lost during the utilization of MCFAs in the body, MCTs actually have a lower usable energy content at less than 7 calories per gram vs. conventional fats comprised of LCFAs at approximately 9 calories per gram (~25% fewer net calories).

MCFAs readily cross cell and mitochondrial membranes, whereas LCFAs are shuttled via binding and transport proteins including the carnitine shuttle required for transport into the mitochondrial matrix for oxidation to generate energy. This high propensity for oxidation within mitochondria of liver cells promotes the production of ketones, which can be readily utilized for energy by other tissues such as the brain, skeletal muscle and heart. Consumption of MCT oil supports nutritional ketosis (increased levels of ketones in the body) independent of carbohydrate intake as typical ketogenic diets are very low in carbohydrate content. Nutritional ketosis should not be confused with ketoacidosis, unrestrained and abnormally excessive ketosis, which can occur in uncontrolled diabetes and not as a result of ketogenic diets or prolonged fasting.

Ketones = Brain Fuel: improved cognitive performance
The brain relies almost exclusively on the simple sugar glucose for energy at ~97% in a freely fed, healthy adult, with the remaining 3% coming primarily from ketones as the only effective alternative fuel source for the brain. Brain glucose uptake is often diminished (~10- 15%) with advancing age and several studies have suggested uptake and utilization of glucose by the brain can deteriorate long before clinical symptoms of cognitive decline.

Mildly stimulating ketone production may be a way to bypass the deficit in brain glucose uptake and repeated dosing for 4 weeks with 5 - 7.5 g of MCT oil 4 times daily in healthy adults consuming their normal diet was shown to sustain mildly elevated levels of ketones in the blood, which was estimated to contribute up to 8 - 9% of brain energy metabolism. In a randomized, double-blind, placebo-controlled clinical trial, elevation of blood ketones via dietary supplementation with MCTs in older adults with mild to moderate cognitive impairment improved cognitive performance/memory.

Body Weight & Composition Management
Substitution of LCTs with MCTs has been shown to positively influence body weight and composition management via modestly increasing energy expenditure and satiety to reduce food intake. Daily consumption of 1.7 g of MCTs in place of LCTs as part of a controlled diet for 12 weeks resulted in significantly enhanced body weight and fat reductions, particularly intra-abdominal fat in Japanese adults. In a randomized, double-blind, placebo-controlled crossover study, consuming 5 - 10 g of MCT resulted in larger increases in diet-induced energy expenditure compared to LCTs in healthy men and women. Another study showed women consuming an MCT vs. LCT containing preload formula matched for energy 30 minutes prior to a meal, resulted in 14 - 15% fewer calories consumed.

While we don't have children, we are the proud parents of two cats. Both were adopted from their owners for a different reason with well over ten years between each adoption.
Our oldest cat has reached the respectable age of 18 years, which makes her a truly old cat, which comes with many health problems of its own. By now we are more like the grand children who are taking care of their very old (great-)grand parent.
It subsequently blows your mind to see how senior cats are put on an even lower protein diet than they already receive. While felines are full-on carnivores, most will received a mixed diet with an unhealthy amount of carbohydrates. If you're lucky the grains are replaced by legumes, which however does not considerably lower the amount of carbs. Never mind on the precious few choices for cats with urinary or kidney problems.

We thought to put together some tips for owners of (future) senior cats, so you know in advance where to pay attention to.

If you have a feline in the family who’s getting up in years, the good news is that many cats today are living into their late teens and early 20s. With the proper care, a cat in good health at 8 can easily live another 10 or 12 years, or even longer. Now is the perfect time to begin taking steps to ensure not only that your cat stays happy and healthy throughout her golden years, but that she also enjoys an excellent quality of life.
Read more
Should I get the vaccin against COVID-19 or not? On vaccines, ivermectin, paracetamol and fever

Should I get the vaccin against COVID-19 or not? On vaccines, ivermectin, paracetamol and fever

By late April most older adults in the Netherlands will have received an invitation from the government or their physicians to get vaccinated. My own invitation came in this past week, quite a bit earlier than expected.
To be honest, it took me much longer to decide than anticipated. And no, it wasn't just because of all the health scares around the AstraZeneca vaccin due to rare thrombosis incidences.
In general, I'm a fan of vaccinations. As a child I received all of the vaccins that were given to us, with no questions asked.
When travelling to Brazil in 2002, I also followed the guidelines to get vaccinated against yellow fever and hepatitis B.
Like most people, I've also been in awe about the speed at which vaccines were developed for COVID-19. Unlike some, I'm also not as concerned about the use of new mRNA technology to develop the Moderna and Pfizer vaccins. What does appal me though is the high cost for these vaccins, that run in to almost €20 for those high tech vaccins as opposed to just about €2 for a traditional vaccin like Oxford AstraZeneca.
What's worse is that those vaccins don't even offer absolute protection and people may be reinfected with a newer virus strain. Or they may require yearly booster vaccins.
As I was pondering whether or not to get vaccinated, a Youtube video passed by in which dr. John Campbell interviewed dr. Pierre Kory.
Read more
Forget about exercising to lose weight: you can't outrun a bad diet!

A few days ago, an article showed up in my newsfood about a remarkable result of research done on the Hadza tribe in Tanzania, which still leads a traditional hunter-gatherer lifestyle.
Despite walking an average of a multiple of ten thousands of steps every day, they barely need more calories than the average couch potato in a Western country.
That same day I discussed with an old friend who had read the same news story. He told me how he had trained for a marathon in the past, but barely dropped any weight while doing so. Only when he spent a week on liquid foods at a spa, he succeeded in losing weight which he mostly thanks to the relaxed environment. Otherwise it was next to impossible. Apparently his body really clung to its precious body fat!
But how was this possible? We didn't really know though we had our suspicions. I I could tell much about the same story. Yes, I'd drop weight pretty fast in the first few weeks of the cycling season or on a longer cycling holiday, but would get stuck at my regular (still too heavy) summer weight while I wasn't really inhaling tons of food. Except then for the Route des Cent Cols during which I could barely eat enough to stay fit and sleep well for all those mountains.
Let's find out more about this particular research!
When Herman Pontzer set off for the rugged savannah of Tanzania to spend a summer with the local Hadza people, he thought he knew what he would find. As an evolutionary biologist, his aim was to measure how the Hadza’s hunter-gatherer lifestyle causes them to burn more energy. Because we all know the more exercise you do, the more calories you burn and the slimmer you become, right? Well no, not exactly.
“Don’t expect any meaningful weight change in the long term from exercise alone.”
What Pontzer and his fellow researchers discovered flew in the face of received wisdom about how our metabolism works. Although the Hadza lead far more active lives than ours – routinely walking long distances, they undertake more physical activity daily than the typical American does in a week – their energy expenditure was no greater. They were burning the same number of calories as men and women from industrialised populations. Our bodies, concluded Pontzer, seem to maintain daily energy expenditure within a narrow window, no matter what lifestyle we lead. While obesity is largely caused by overconsumption, it appears there’s little we can do to change the calories we burn.
Read more

recommended use
take 1 tablespoon per day, on an empty stomach, or as directed by your qualified healthcare professional. Use in cooking, baking, on salads or in smoothies.
Not recommended for frying.

storage
after opening, product may be refrigerated or stored at cool room temperature
keep out of reach of young children

warning: may have a laxative effect or cause digestive upset in some individuals. Do NOT exceed recommended daily intake. Do NOT use in frying, owing to low smoke point.