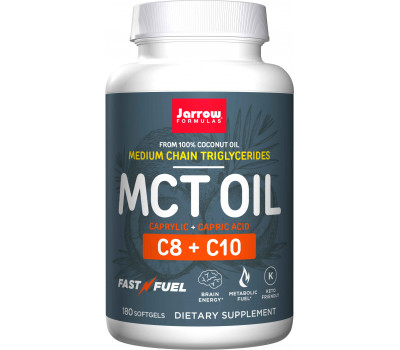 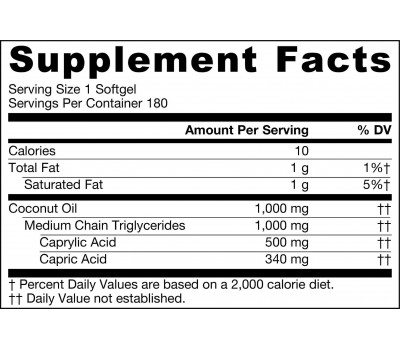 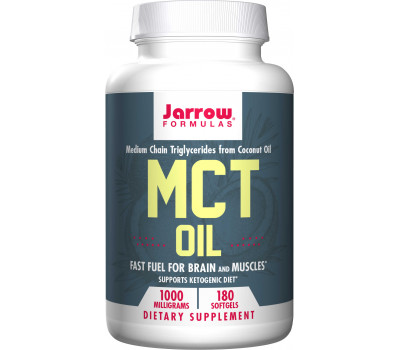 • quick energy for the brain
• fast metabolic fuel for muscles
• support for a low-carb, ketogenic diet

Jarrow Formulas’ MCT Oil is an odorless, neutral tasting, all-natural source of caprylic (C8:0) and capric (C10:0) MCFAs as triglycerides derived from coconut oil. Triglycerides comprised of caprylic and capric MCFAs are easily digested and absorbed, and primarily transported directly to the liver where they are extensively oxidized within the mitochondria of liver cells for energy and promote the generation of ketones (i.e., ketogenic). Ketones readily cross the blood brain barrier to serve as the only alternative fuel source to glucose for the brain as well as serve as a fuel source to other tissues including heart and skeletal muscle. Substitution of longchain triglycerides (LCTs) with MCTs may support body weight and composition management due to modest enhancement of energy expenditure and reductions in food intake.

MCT Oil ≠ Coconut Oil
Coconut oil is the richest natural source of MCTs, but only provides ~8 - 15% caprylic and capric MCFAs. The predominant fatty acid in coconut oil is 12 carbon long lauric acid (~45 - 78%). Although sometimes referred to as a MCFA, lauric acid behaves more like LCFAs in the body. These distinct chemical and physical properties impact the way MCFAs are absorbed and metabolized, thus accounting for their unique metabolic effects compared to LCFAs.

“Fast” Energy & Ketogenesis
MCTs are very easy for the body to digest and unlike LCFAs, do not require bile acids to facilitate digestion and absorption. MCFAs are more soluble in aqueous solutions (e.g., biological fluids) than LCFAs and are primarily absorbed along with other water-soluble nutrients into portal circulation for direct transport to the liver, where they are extensively oxidized as a source of energy and support ketone formation. Thus, there is greatly reduced deposition of MCFAs into fat tissue for energy storage. In contrast, once absorbed, poorly watersoluble LCFAs are re-esterified into triglycerides for incorporation into chylomicrons, a type of lipoprotein that transports ingested fatsoluble nutrients, and transported via the lymphatic system to the general circulation, allowing for extensive uptake into fat tissue. Due to energy lost during the utilization of MCFAs in the body, MCTs actually have a lower usable energy content at less than 7 calories per gram vs. conventional fats comprised of LCFAs at approximately 9 calories per gram (~25% fewer net calories).

MCFAs readily cross cell and mitochondrial membranes, whereas LCFAs are shuttled via binding and transport proteins including the carnitine shuttle required for transport into the mitochondrial matrix for oxidation to generate energy. This high propensity for oxidation within mitochondria of liver cells promotes the production of ketones, which can be readily utilized for energy by other tissues such as the brain, skeletal muscle and heart. Consumption of MCT oil supports nutritional ketosis (increased levels of ketones in the body) independent of carbohydrate intake as typical ketogenic diets are very low in carbohydrate content. Nutritional ketosis should not be confused with ketoacidosis, unrestrained and abnormally excessive ketosis, which can occur in uncontrolled diabetes and not as a result of ketogenic diets or prolonged fasting.

Ketones = Brain Fuel: improved cognitive performance
The brain relies almost exclusively on the simple sugar glucose for energy at ~97% in a freely fed, healthy adult, with the remaining 3% coming primarily from ketones as the only effective alternative fuel source for the brain. Brain glucose uptake is often diminished (~10- 15%) with advancing age and several studies have suggested uptake and utilization of glucose by the brain can deteriorate long before clinical symptoms of cognitive decline.

Mildly stimulating ketone production may be a way to bypass the deficit in brain glucose uptake and repeated dosing for 4 weeks with 5 - 7.5 g of MCT oil 4 times daily in healthy adults consuming their normal diet was shown to sustain mildly elevated levels of ketones in the blood, which was estimated to contribute up to 8 - 9% of brain energy metabolism. In a randomized, double-blind, placebo-controlled clinical trial, elevation of blood ketones via dietary supplementation with MCTs in older adults with mild to moderate cognitive impairment improved cognitive performance/memory.

Body Weight & Composition Management
Substitution of LCTs with MCTs has been shown to positively influence body weight and composition management via modestly increasing energy expenditure and satiety to reduce food intake. Daily consumption of 1.7 g of MCTs in place of LCTs as part of a controlled diet for 12 weeks resulted in significantly enhanced body weight and fat reductions, particularly intra-abdominal fat in Japanese adults. In a randomized, double-blind, placebo-controlled crossover study, consuming 5 - 10 g of MCT resulted in larger increases in diet-induced energy expenditure compared to LCTs in healthy men and women. Another study showed women consuming an MCT vs. LCT containing preload formula matched for energy 30 minutes prior to a meal, resulted in 14 - 15% fewer calories consumed.

recommended use
Take 1 softgel 3 times per day on an empty stomach, or as directed by your qualified healthcare professional.

storage
after opening, product may be refrigerated or stored at cool room temperature
keep out of reach of young children