Home/Categories/Type/Fats/Fish, krill and mussel oil/maxDHA 180 softgels value-size - omega3 with a high amount of DHA | Jarrow Formulas
7 of 12
Save
30% 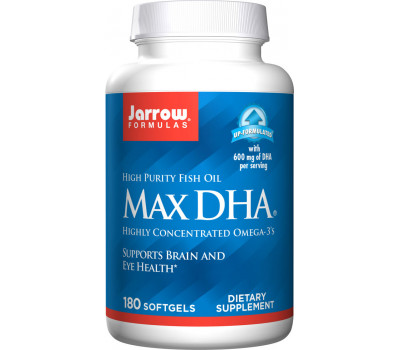 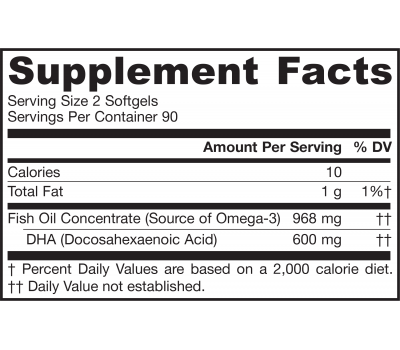 Jarrow Formulas Max DHA 180 softgels is highly concentrated in omega-3 fatty acids and enriched in DHA. The DHA is derived from fish oil of cold water fish (anchovies, sardines) and is ultra purified and concentrated by molecular distillation.

The predominant fatty acid in the brain, nervous system and retina of humans is DHA, an omega-3 fatty acid. DHA is necessary for fetal and infantile neurological development during pregnancy and lactation.
DHA also helps support neurological function in seniors.

background reading
In the 1970’s, researchers began to realize that essential fatty acids from fish oil were beneficial. We can thank Greenland Eskimos for this discovery, because it was their high fat diet from cold water fish that made their low incidence of coronary artery disease so striking.

Two members of the omega-3 family of fatty acids, docosahexaenoic acid (DHA) and eicosapentaenoic acid (EPA), are particularly noted for their health promoting properties. DHA, in particular, plays a key role in the proper formation, development, and function of the brain, retina and central nervous system.

Hooray for DHA
DHA is selectively incorporated into the nerves, retina and gray mat- ter of the brain—all being tissues responsible for nerve transmission. In fact, DHA makes up about 40% of the polyunsaturated fatty acids (PUFAs) in the brain and roughly 60% in the retina. DHA is so important that the body is able to recognize it and transport it preferentially to the nervous system. There are even special mechanisms to allow it to cross the blood-brain barrier. The prevalence of DHA in brain cell membranes results in a powerful impact on the fl uidity and function of cell membranes. DHA levels may also affect the capacity to regulate brain cell membrane proteins, which are critical to neuronal function

DHA for expecting mothers and newborns
DHA is essential for the proper neurological development of a growing fetus and infant. Our bodies are capable of producing some DHA from other omega-3 precursors, but what we are able to convert is only a small percentage of what is needed to promote optimum brain health and, in particular, brain development. Because of this developmental advantage to babies, DHA has found its way into breast milk via evolution. And of importance to modern mothers is research showing that increased maternal dietary intake of DHA leads to higher levels in breast milk. Consequently, sufficient intake of DHA during and after pregnancy is vitally important.

Some pediatricians suggest that maternal stores of DHA be augmented ideally as early as three months prior to conception to ensure an adequate supply for the fetus. Scientists have pointed to DHA as one reason why breast-fed children tend to have higher IQ scores and better visual acuity than formula-fed children. The evidence is substantial enough that infant formula manufacturers have begun adding DHA to their products.

Switching gears from young to old, aging leads to an increased risk in developing abnormal deposits in the brain and damage to brain-cell interconnections. This can lead to the deterioration of memory and the decreased ability to carry out daily tasks. DHA displayed some protection against both dendritic damage in one mouse model (Calon, 2004) and the accumulation of amyloid plaques in another (Quinn, 2007). Decreased DHA blood levels can also often be found in people experiencing age-related cognitive impairment. Some research has suggested that supplemental DHA may even have some effects on mood, but other studies find no changes. The results are preliminary, but these potential effects seem logical given DHA’s fundamental role in ensuring neuronal membrane fluidity and thereby facilitating cell function and communication.

Max DHA delivers a high level of pure DHA and is ideal for enhancing brain function in all ages, but especially in children and seniors. It’s your best value for this vitally essential fatty acid.

Usage and safety
Overall, DHA from fish oil in supplement form is a relatively safe compound. Caution should be noted for anyone taking coumadin/warfarin or any other type of oral blood thinner. In adults, the typical amount of fish oils that has been used in clinical studies ranges from 1,000 to 3,000 mg per day. In infants and children, the recommendation has been 40 mg/kg of body weight.

recommended use
general health
Take 1 to 2 softgels with each meal or as directed by your qualified health care consultant.

pregnancy or lactation
Take 1 to 2 softgels per day or as directed by your qualified health care consultant.
children
Give 1 softgel per day.

storage
store in a cool, dry place away from light and heat
keep out of reach of young children

contra-indication
If you have a medical condition (especially seafood allergies or coagulopathy), are taking medications (especially anticoagulants), or facing surgery, consult your health care practitioner before using this product.