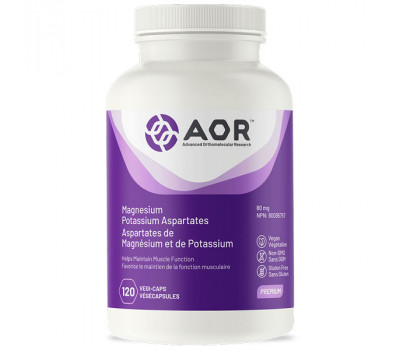 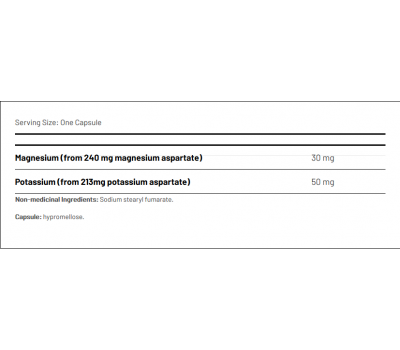 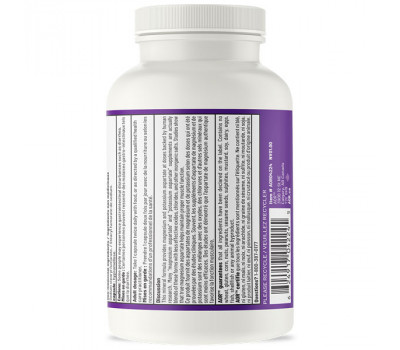 background reading
Energy Electrolytes
Fatigue is a problem that affects all people at some point, and chronic fatigue is a particularly debilitating disorder that is associated with muscular weakness, depression and of course fatigue.

Fully reacted magnesium and potassium aspartates are essential nutrients that have important roles in the cellular cycle that produces energy.
Aspartic acid is an important energy-carrying intermediate.
Magnesium helps to produce and stabilize ATP, the major form of cellular energy. Magnesium also enhances the transport of potassium, which is involved in many roles in the body, including the function of nerve cells. Potassium deficiency produces symptoms similar to chronic fatigue.

Alleviate Exhaustion
Many clinical studies have demonstrated that magnesium potassium aspartates can help to relieve fatigue. Patients with chronic fatigue experienced significant alleviation of their symptoms when taking the supplements. Other fatigue sufferers have experienced increased strength and physical activity.

The Real Thing
Many magnesium and potassium aspartates are mixed with other compounds. AOR’s Magnesium + Potassium Aspartates contain true, fully-reacted nutrients in doses backed by clinical studies to deliver maximum relief from fatigue.

The term “chronic fatigue syndrome” is a recent one, but there’s no reason to believe that it’s a new disease. Clinicians recognized the soul-draining exhaustion, poor stamina, flu-like symptoms, unrefreshing sleep, and problems with concentration and short-term memory that characterize the disorder as early as the times of Queen Victoria. Researchers today have a somewhat clearer understanding of its biological basis.

Help for Fatigue
Initial studies seeking help for fatigue found that fully-reacted magnesium and potassium aspartates most consistently offset metabolic exhaustion. These compounds exert a range of important influences on the energy-producing tricarboxylic acid (TCA) cycle.
Aspartic acid is a critical energy-carrying TCA intermediate, as well as being an excitatory neurotransmitter in the central nervous system.
Magnesium plays a critical role in the production and stabilization of ATP: it activates almost all the enzymes of the TCA cycle, and prevents ATP from being broken down.
Potassium is an essential electrolyte involved in both electrical and cellular functions in the body and is needed for the proper functioning of nerve cells. Potassium deficiency results in symptoms very similar to aspects of chronic fatigue, featuring muscular weakness, depression, fatigue, and malaise.
Furthermore, magnesium and potassium are known to cooperate in the body: magnesium enhances the cellular transport of potassium.

The Trials
In double-blind studies involving over 3000 patients, 65 to 91% of chronic fatigue sufferers taking fully- reacted magnesium and potassium aspartates experienced clear-cut alleviation of their symptoms. Patients typically began to notice the effects within a week: improvements were usually noted within five days, and rarely took more than 10 days to set in.

In one double-blind clinical trial involving 145 patients, 85% of those given potassium and magnesium aspartates reported an increase in strength or physical activity. This study included patients whose fatigue had no obvious physical cause, along with patients whose fatigue was associated with anxiety neuroses, gastrointestinal disturbances, menopause, the postpartum period, or a previous influenza infection.

Alleviated fatigue was demonstrated in further trials with patients who had been suffering from fatigue unrelated to depression for over two years, and in patients whose fatigue was related to an organic disease such as arthritis, headache, depression, rheumatic fever, trauma, asthma, lupus, infectious mononucleosis (“mono”) or duodenal ulcer. Fatigue patients who took fully-reacted magnesium and potassium aspartates were described as becoming alert, cheerful, animated and energetic, and were refreshed by sleep.

When the aspartate mixture was given to healthy, unfatigued persons, very few people reported feeling better while taking the supplement. Clearly, there was some direct need for the supplement in fatigued individuals.

In another study, a strong correlation was found between normalization of the patients’ muscular excitability and his or her subjective experience of relief. Tests on fatigued individuals with stable, debilitating disease (including cancer, hyperthyroidism, and arthritis) led to similar results.