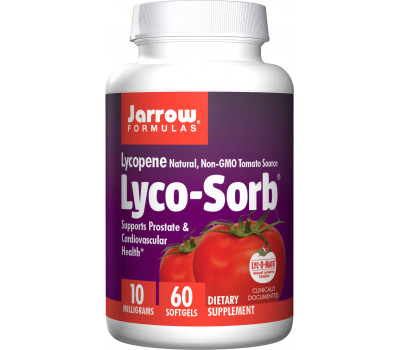 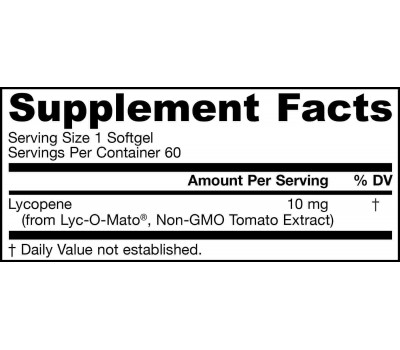 who can benefit from Lyco-Sorb?
Lyco-Sorb is for people looking to increase their consumption of lycopene and antioxidants or for those who eat very little tomato-based products. Each softgel contains the equivalent amount of lycopene found in two tomatoes, but which can't be readily absorbed from tomatoes because the entire cell wall must be destroyed to extract the lycopene, which only happens when making tomato paste.

how does each active ingredient function in Lyco-Sorb?
• Lycopene is a powerful antioxidant that protects LDL cholesterol and skin against free radical damage. It may also play a role in hormone regulation and promote healthy DNA in the prostate.
• phytoene and phytofluene are two carotenoids that may protect the skin from ultraviolet light
• gamma tocopherol protects against nitrogen-based free radicals, which alpha tocopherol cannot do. May also work with lycopene to promote prostate and heart health

background reading
Clinically studied Lyc-O-Mato
Lycopene is a bright red pigment related to beta-carotene, but which is much more efficient as an antioxidant. The tomato is the richest common natural source and its lycopene becomes more bioavailable when the vegetable is cooked with a small amount of oil, such as olive oil. Research examining the benefits of high levels of lycopene consumption and high blood levels of lycopene have been consistently associated with support for prostate health and with the promotion of proper cell replication in the tissues of the digestive tract. Other research indicates lycopene may protect the skin against ultraviolet light. The protective mechanism usually proposed is antioxidant activity and free radical scavenging. Compared with beta-carotene, lycopene is better at scavenging radicals, such as lipid peroxy radicals, and in vitro studies suggest that it is even better than vitamin E in this role. Lycopene is the most abundant carotenoid found in the blood and has been associated with protection of LDL cholesterol against free radical damage. In addition, lycopene is 100 times more efficient in quenching singlet oxygen than is vitamin E.

Cellular health
This tomato-derived carotenoid may support proper cell replication by activating special enzymes which function to eliminate toxins. When Israeli researchers incubated breast and liver cells with lycopene, they found this stimulated the production of phase II detoxification enzymes. Phase II enzymes help the body to rid itself of toxic substances. It has been proposed that the expression of phase II enzymes is regulated by an “antioxidant response element” (ARE) and that this element is involved in helping the body maintain normal cell replication.

Prostate protection
Lycopene has been shown to be particularly effective in supporting the health of the prostate. Lycopene is found in high concentrations in that gland. Aside from activating phase II detoxification enzymes, this tomato product also may influence male hormone regulation. In a study published in early 2004, lycopene was shown to interfere with local androgen activation by down-regulating 5-alpha- reductase, the key enzyme for the transformation of testosterone into dihydrotestosterone, the form of the hormone that binds most actively to prostate cells. As a consequence, the expression of androgen- regulated target genes was also reduced. In addition, lycopene decreased the expression of two prostatic cytokines, IGF-I and IL-6, both of which are associated with cellular transformations.

Women's health
Although this carotenoid has been most researched as an adjuvant to men’s health, recent research indicates that women should take a second look at lycopene. In findings announced in April 2004, scientists from Firat University in Turkey and the University of Maryland used an animal model to investigate changes in cellular tissues associated with the female reproductive system rather. Lycopene supplementation significantly protected the regulation of cellular replication and had a positive effect on serum concentrations of vitamins C, E and A, homocysteine and malondialdehyde (MDA). Furthermore, a study in early 2007 found lycopene reduced oxidative stress and helped postmenopausal women maintain healthy bone density.

Natural lycopene: Nature knows best
Lyc-O-Mato is from Israel and is the most studied lycopene product in the world. It is 100% natural from non-GMO tomatoes and has demonstrated numerous benefits not shown by synthetic sources. A 14-month study published in the November 2003 issue of the Journal of the National Cancer Institute pointed out that carotenoids and other secondary plant compounds evolved as sets of interacting compounds. This would help explain the superior results found in this trial using a natural source of lycopene that also supplied naturally occurring co-nutrients.

Lyc-O-Mato tomato extract is scientifically standardized to contain 6% lycopene along with phytoene and phytofluene, which are also members of the carotenoid family. Lycopene is the marker for standardization because of its importance to good health. Standardization ensures that consumers can expect a consistent product. The LycoRed manufacturing process also assures that all the phytonutrients naturally present in the tomato oleoresin will be preserved in Lyc-O-Mato and this means added health benefits.