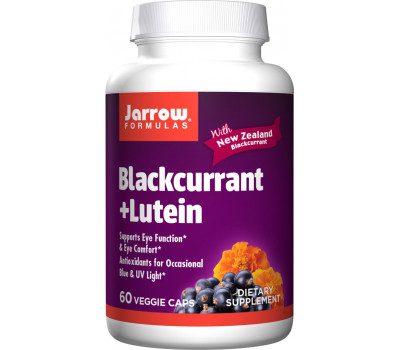 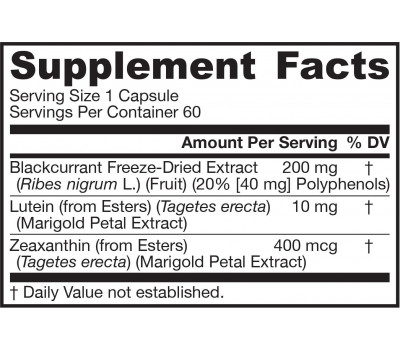 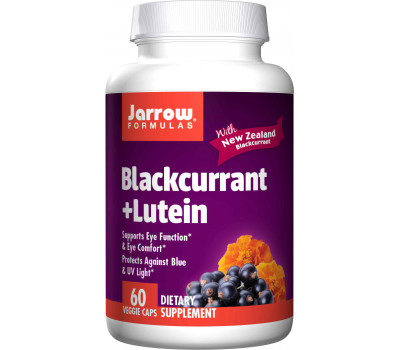 who can benefit from Blackcurrant + Lutein?
Adults of all ages who are concerned about maintaining healthy eyes.

how do black currant and lutein& zeaxanthin function in Blackcurrant + Lutein?
Blackcurrant (Ribes nigrum): a great source of the antioxidant anthocyanins, delphinidin-3-rutinoside and cyanidin-3-rutinoside, which have shown benefits that promote eye relaxation and circulation.

Lutein and zeaxanthin: integral components of luteal pigment found in the macula that must be obtained in the diet. They help protect the retina by absorbing UV radiation and neutralizing free radicals. Lutein and zeaxanthin, antioxidant carotenoids found in dark green, leafy vegetables, are important components of the macular pigment in the eye. The macula is responsible for focus and color differentiation, and the macular pigment protects the eyes from ultraviolet radiation and oxidative stress.

background reading
The forgotten superberry: blackcurrant
As the 20th century began, blackcurrants were a popular fruit in the United States. However, in the first few years of the 1900’s the Northeastern U.S. was stricken by an outbreak of white pine blister rust that threatened many species of pine. Subsequently, it was determined that the blackcurrant plant was an integral host in the life cycle of this fungus. The lumber industry considered blackcurrant to be a danger to a thriving national industry and was able to obtain a federal cultivation ban on the plant. State bans were then instituted and only recently have many states lifted prohibitions on blackcurrant cultivation.

Lost for almost a century was the knowledge that the nutrient and antioxidant profile of blackcurrant significantly trumps blueberry, the purported “king of berries.” The antioxidant anthocyanins of blackcurrant have proven particularly useful in promoting eye health. As a result, it seemed natural to combine an extract of New Zealand blackcurrants with the studied eye health effects of lutein.

Blackcurrant & eye health
Delphinidin-3-rutinoside has shown specific activity in relaxing the ciliary smooth muscle of the eye; in myopia, or near-sightedness, the ciliary smooth muscle cannot relax enough to allow focusing on distant objects. In a study of frogs, cyanidin-3-rutinoside displayed some importance for the regeneration of rhodopsin. Rhodopsin is the primary photopigment of rod cells, enabling night vision. Two studies conducted in Japan have suggested increased blood flow to the optic papilla and reduced susceptibility to eye fatigue due to consumption of blackcurrant.

Lutein & zeaxanthin
Scientists believe that lutein and zeaxanthin contribute to the density of macular pigment –– the component of the eye which typically absorbs and filters out 40 to 60% of damaging near-ultraviolet blue light (near-UV blue light) which strikes the retina. The denser the pigment, the more the inner retina is protected from light-induced damage. Lutein/zeaxanthin also helps limit blue light damage to the inner retina by inhibiting lipid peroxidation and by neutralizing free radicals.

contra-indication
no contra-indications known, but if you have a medical condition, are pregnant, lactating, or trying to conceive, are under the age of 18, or are taking medications, consult your health care practitioner before using this product.