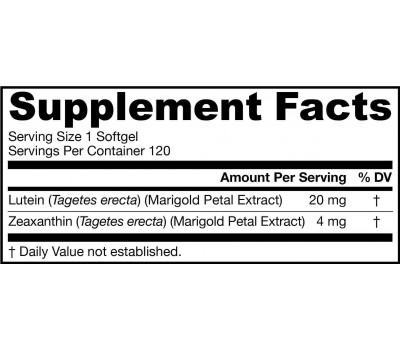 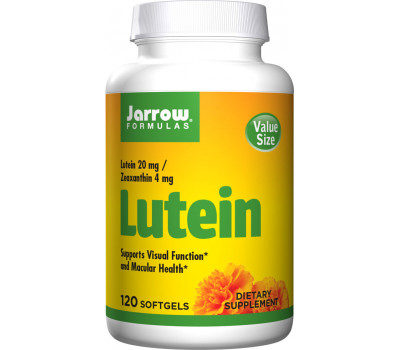 The macula is responsible for focus and color differentiation. Lutein and zeaxanthin are found in dark green, leafy vegetables. While the average American intake of lutein is only 2 mg per day, other population groups consume up to 20 to 25 mg per day.

who benefits from Lutein?
Adults of all ages who are concerned about maintaining healthy eyes.

how does each active ingredient function in Lutein?
• lutein is an integral component of luteal pigment found in the macula that must be obtained in the diet. They help protect the retina by absorbing UV radiation and neutralizing free radicals

Two “minor” carotenoids provide major protection
Jarrow Formulas Lutein is a blend of lutein and zeaxanthin extracted from marigold petals and then purified into crystalline form. These carotenoids (a family of brightly colored pigments in plant foods) are less common than their better-known relative, beta-carotene, but they appear to offer more and greater benefits to the body. In particular, lutein and zeaxanthin have been shown clinically to support visual function and to protect the health of eye tissues as we age. In addition, preliminary research suggests that lutein and zeaxanthin may protect the cardiovascular system and maintain normal cell differentiation in the tissues of the breast, cervix, colon and skin

What are lutein and zeaxanthin?
Lutein and zeaxanthin are important antioxidants used by the body for a number of physiological functions. Lutein is a carotenoid which does not supply vitamin A activity to the body. It is chemically distinctive in that it lacks part of the terminal “ring” structure of the other carotenoids. Like its close relative zeaxanthin, lutein is what is termed a xanthophyll carotenoid. Both of these related carotenoids are better antioxidants than is beta-carotene under normal oxygen conditions. Lutein can be metabolized into zeaxanthin and is therefore the more essential carotenoid. Zeaxanthin has been shown to be present in the center of the macula. Lutein and zeaxanthin are usually found together in leafy green vegetables, such as kale, broccoli, spinach and mustard greens.

One of the primary functions of lutein and zeaxanthin is to provide protection against oxidative and free radical damage. These yellow-colored carotenoids are found in high concentrations within the macula lutea (the yellow spot in the center of the retina) and in smaller amounts throughout the retina and the eye lens. They are also concentrated in the skin, breast and cervical tissues. These stores, however, appear to diminish with age if not regularly replenished through dietary means.

Healthy vision
Scientists believe that lutein and zeaxanthin contribute to the density of macular pigment –– the component of the eye which typically absorbs and filters out 40 to 60% of damaging near-ultraviolet blue light (near-UV blue light) which strikes the retina. The denser the pigment, the more the inner retina is protected from light-induced damage. Lutein/zeaxanthin also helps limit blue light damage to the inner retina by inhibiting lipid peroxidation and by neutralizing free radicals.

Cardiovascular health
As is true of vitamin E, but not of other carotenoids, lutein is found in blood plasma at levels correlated with the amount of cholesterol. Tests suggest that although lutein is relatively minor as a component of LDL cholesterol in comparison with vitamin E, its antioxidant protective effects may be ten times greater if compared on a one-to-one basis.

Regulated cell growth
Several studies have indicated that lutein and zeaxanthin may be helpful in protecting cells in various tissues of the body, such as the skin, breast, cervix and large intestine. A 1999 Harvard epidemiological study indicated that lutein is one of the nutrients which is associated with better breast health. Likewise, a study published in the American Journal of Clinical Nutrition found a similar positive association between the consumption of lutein and colon health. Lutein, like lycopene and a number of other carotenoids, would appear to influence the regulation of cell growth and repair.

Here is a breakdown of the six reasons why eggs are such an awesome food choice
Read more
What are free radicals?

Yet, free radicals are essential to life. The body's ability to turn air and food into chemical energy depends on a chain reaction of free radicals. Free radicals are also a crucial part of the immune system, floating through the veins and attacking foreign invaders.
Read more
LASIK eye surgery, is it safe?

In the past decade, LASIK eye surgery has boomed in popularity. It is easy to understand why: instead of wearing contacts or glasses, after surgery your eyes are corrected to result into (almost) perfect vision. However, sometimes we also hear horror stories: late 2016 Dutch television showed a program in which a house physician laments he's suffering from horrible neuralgic pains after having undergone laser surgery. Experts claim this is an extremely rare side effect from a specific type of LASIK surgery that nobody needs to worry about.
Read more
Protect your body against the dangers of aging

recommended use
Take 1 softgel per day with food, or as directed by your qualified health care consultant