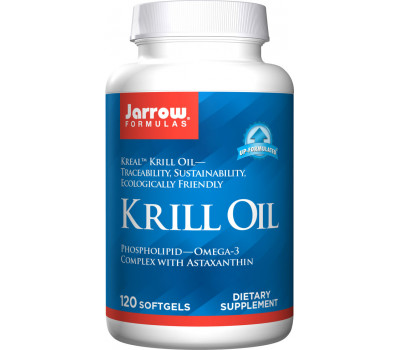 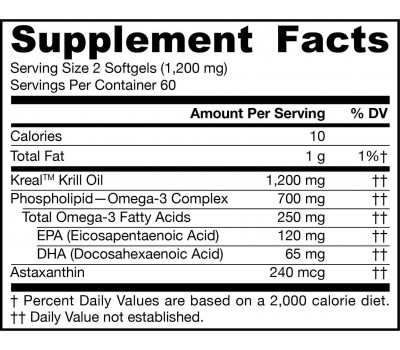 Jarrow Formulas Krill Oil 120 softgels offers comfort to women during pre-menstrual periods and is beneficial for children and adults who suffer from attention deficit disorders.
Krill oil also has favorable effects on cholesterol metabolism and lessens inflammation which is beneficial for people suffering from degenerative joint diseases like arthritis or other illnesses which very often come with severe cases of inflammation in the softer tissues.

The unique and synergistic blend of ingredients in genuine krill isn't found in fish oil -- or anywhere else in nature. Research shows that it provides healthy support to many organs and systems in your body, including your heart, brain, nervous system, liver, joints, and immune system. Medicinal or functional nutrition like krill oil will eventually play an essential role in prevention of disease, including cancer, diabetes, cardiovascular and neurodegenerative disorders.

what distinguishes 100% Krill Oil?
Krill oil is not a unique product anymore as many nutritional supplement stores nowadays offer krill oil, but this krill oil has the highest content phospholipids, astaxanthin and omega 3 (EPA:DHA) fatty acids.
The krill needed for krill oil is harvested in a certified sustainable way by Aker BioMarine which is the first company to receive the Marine Stewardship Council certificate.

how does each active ingredient function?
The main active ingredient is krill oil and krill oil is a whole food product, extracted from the krill by means of a special cold extraction which leaves all of the antioxidants, fatty acids and phospholipids intact. The fatty acids are assimilated in a similar fashion as regular omega 3 from fish oil but thanks to its bond with phospholipids their bioavailability is much greater than omega 3 fatty acids derived from regular fish oil.
Astaxanthin and other antioxidants work in a similar fashion but also their bioavailability is much greater than the ones found in fruit or vegetables. The standard to which all antioxidants are measured, ORAC or Oxygen Radical Absorption Capacity, exceeds that of regular standalone antioxidants like vitamine E, A and Astaxanthine from fruit. In case of krill oil you can say that the whole has a better effect than the sum of parts of the ingredients present in krill oil.

General consensus worldwide is that you need three times as much of the omega 3 fatty acids (EPA+DHA) present in two krill oil capsules, however the bioavailability of EPA and DHA present in krill makes just one capsule suffice for otherwise at least 500 mg of EPA and DHA from regular fish oil for a healthy heart. The EPA and DHA in traditional fish oil is bonded to triglycerides and this bond with triglycerides off sets many of the immediate benefits of EPA and DHA in case of heart health, brain function or premenstrual comfort.

key benefits
• regulates blood lipids and cholesterol to healthy levels
• offers relief of emotional and physical discomforts for women menstruating
• provides significant joint relief
• contains ultra-potent marine  phospholipids that may help to maintain normal brain function
• high antioxidant value greater than most like vitamin A, E and Q10 together
• may improve the ability of the liver and glucose metabolism to respond to dietary challenges

K•REAL®  and MSO®  are registered trademarks of Enzymotec Ltd.
MSO® is a special manufacturing technology by Enzymotec  that ensures superior freshness and potency.

Krill are shrimp-like crustaceans, most of which are only about 1-2 centimeters long, which serve as food for whale sharks, manta rays, certain types of whales and seals and a few seabird species. There are an enormous number of krill in our oceans. In fact, the entire species of Antarctic krill is estimated to comprise 500 million tons. That’s roughly twice the weight of all humans put together!

Krill oil is derived from krill. It contains significant amounts of the omega-3 fatty acids (ω3FA) eicosapentanoic acid (EPA) and docosahexaenoic acid (DHA). Although the concentration of ω3FA in krill oil is usually less than in fish oil products, krill oil contains other valuable constituents including phospholipids— primarily consisting of phosphatidylcholine, which is an essential phospholipid in the body. Krill oil also provides vitamin A, vitamin E (alpha-tocopherol) and astaxanthin, a powerful carotenoid antioxidant. It is this unique composition, rather than just the ω3FA, that seems to provide krill oil with a spectrum of benefits. These benefits include promoting healthy levels of blood lipids and glucose, supporting healthy brain function, and enhancing healthy liver and glucose metabolism.

Serum Lipids and Glucose
In a three-month, prospective, randomized study, one-hundred and twenty subjects were randomly assigned to one of four groups.
Group A received krill oil at a body mass index (BMI)-dependent daily dosage of 2-3 g daily.
Participants in Group B were given 1-1.5 g krill oil daily, and
Group C was given fish oil containing 180 mg eicosapentaenoic acid (EPA) and 120 mg docosahexaenoic acid (DHA) per gram of oil at a dose of 3 g daily.
Group D was given a placebo.
The results indicated that 1-3 g krill oil daily was effective in promoting healthy levels of glucose, total cholesterol, triglycerides, LDL, and HDL within a healthy range, as compared to both fish oil and placebo. At both lower and equivalent doses, krill oil was significantly more effective than fish oil for promoting healthy levels of glucose, triglycerides, and LDL levels within a normal range.

Superba™ Krill Oil:
MSC Certified, Traceable and Sustainable Krill Oil
Krill are small crustaceans that are a vital component of the marine ecosystem. Effects of krill harvesting on other marine species that feed on krill, including whales, seal, and birds, need to be carefully monitored in order to ensure overall marine sustainability. Jarrow Formulas Krill Oil only uses Superba™ Krill Oil from Aker BioMarine ® , the only krill fishery that has been certified by the Marine Stewardship Counsil (MSC) for its environmentally friendly and sustainable harvesting method. Aker’s patented “Eco- Harvesting” fishing system catches only krill ( Euphausia superba ), with no unwanted by-catch of other species such as fish and seals that other traditional fisheries often do. In addition, Aker BioMarine works with the World Wide Fund for Nature (WWF) Norway to monitor and manage krill biomass in the Antarctic Ocean.

recommended use
take 2 softgels per day with a meal or as or as directed by a qualified medical physician
Always consult you physician when undertaking a supplement program to verify if no medication might intefere with this supplement.

contra-indication
People with seafood allergies or coagulopathy, who are taking anticoagulants or other medications or facing surgery should notify their physician before using krill oil