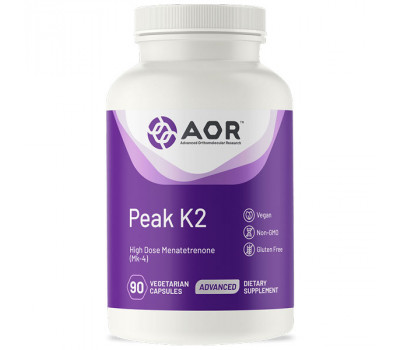 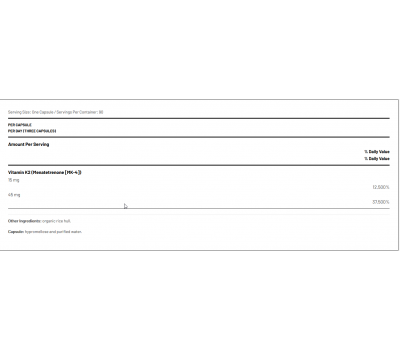 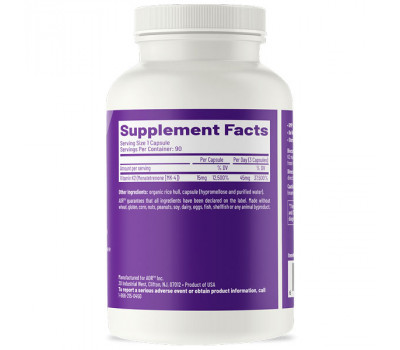 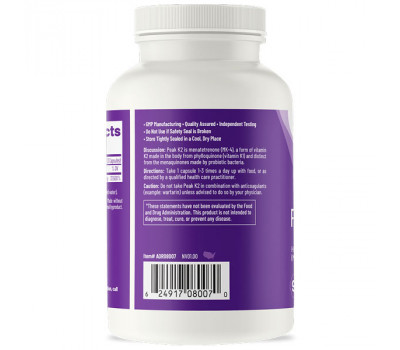 AOR Peak K2 is menatetrenone (MK-4), a form of vitamin K2 made in the body from phylloquinone (vitamin K1) and distinct from the menaquinones made by probiotic bacteria. Available science indicates that vitamin K2 - and especially menatetrenone - is superior to Vitamin K1 in maintaining the health of the bones and vascular system. Clinical trials have proven that high-dose vitamin K2 does not cause excessive or abnormal blood clotting, although it will interfere with "blood thinning" medications

background reading
Vitamin K is an essential component for health and deficiency can cause serious consequences in cardiovascular, bone and liver health. Even though vitamin K has been known since the early part of the last century, researchers and clinicians have only focused on its coagulation ability and there has been misunderstanding regarding its safety.

Vitamin K constitutes a family of compounds that exist as natural vitamin K1 (phylloquinone) and vitamin K2 (menaquinones) and the synthetic form vitamin K3 (menadionione). The chemical structure consist of a benzene ring (napthoquinone) and a side chain with various number of isopreny groups. The suffix numbers 4,7,8 and 9 refer to the position of these groups.

Vitamin K1 is the more prevalent form in our diet and is found in leafy green vegetables (lettuce, broccoli, cabbage, spinach etc) and vegetable oils. Vitamin K2 constitutes a family of compounds that include MK-4 and MK-7 forms that are rich in fermented foods like natto and various cheeses and the lesser available forms MK-8 and MK-9. Recent studies have suggested that vitamin K2 is better absorbed and persists longer in the plasma then vitamin K1 and may be more appropriate for supplementation.

Pharmacological functions:
The chief function of vitamin K is to act as a co-factor (an adjunct) for vitamin K-dependent proteins in the body and convert the glutamate residues of these proteins into gamma-carboxyglutamate group via an enzymatic process of carboxylation. Such proteins include coagulation factors (II,IV,VI and C), bone turnover molecules (osteocalcin and protein S), vascular repair proteins (Matrix GLA) and proteins responsible for cell-cycle arrest, signal transduction and cell-cell adhesion. The latter three proteins have implications in aberrant growth of cells e.g. tumorigenesis.

1. Bone Health
Bone is a living tissue that continually undergoes remodeling via synthesis and degradation of bone tissue by osteoblast and osteoclast cells respectively. In addition to other key nutrients for proper bone-remodeling e.g. calcium, vitamin D, vitamin C, zinc, magnesium and manganese, vitamin K plasma status is important for maintaining healthy bone. Osteocalcin is a small protein and the degree of its carboxylation (hence vitamin K status) is a measure of bone health. There is a direct correlation between carboxylation of osteocalcin and bone health. In human studies low serum vitamin K levels have been associated with increased incidence of osteopenia (pre-osteoporotic condition) and the full blown osteoporosis. Japanese studies have shown that in areas where there is high consumption of natto (Eastern Japan- Tokoyo) the incidence of osteoporosis and hip fractures is significantly low compared to Western Japan (Hiroshima) where the incidence of natto consumtion is low (hence low vitamin K levels).

2. Vascular Health
Arterial calcification shares many similarities with bone metabolism. Matrix GLA protein is found in vascular tissue. Under carboxylation of this protein (much like osteocalcin) is an indication of low plasma K levels and consequently the arterial tissue is less elastic due to increased calcium deposition resulting in increased incidence of cardiovascular mortality and ischemic heart disease. Studies have shown that vitamin K intake can have a protective effect and prevents loss of elasticity, a key indicator of vascular health. Furthermore, there is a recent clinical study from the UK which shows that vitamin K may protect not only against warfarin induced calcification but also may stabilize and help control anti coagulation levels. However, it is strongly advised that patients taking blood thinning medication like warfarin (Coumadin) should consult their physicians before taking vitamin K2.

3. Hepatocellular carcinoma
Studies have suggested that high levels of vitamin K intake may be associated with a lower incidence of one particular type of liver cancer (hepatocellular carcinoma). The mechanism is postulated to be an effect on inhibiting the cell-cycle, cell-cell adhesions (and possibly the ability to metastasize).

contra-indication
Clinical trials have documented that menatetrenone does not induce hemostatic activation. However, it will interfere with the activity warfarin (Coumadin®) and possibly other anticoagulant ("blood thinning") medications. Patients prescribed anticoagulants must not take this supplement.
If you have a medical condition, are pregnant, lactating, or trying to conceive, are under the age of 18, or are taking medications, consult your health care practitioner before using this product.