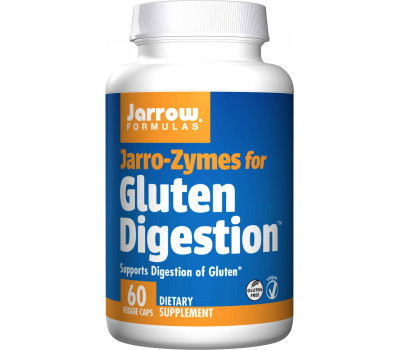 Jarro-Zymes for Gluten Digestion™ combines bacterial- and fungal-derived gluten-digesting enzymes, including endo- and exopeptidases capable of breaking gluten proteins into smaller peptides and amino acids to support management of a low gluten diet.
Jarro-Zymes for Gluten Digestion™ is a multi-enzyme formula that supports the digestion of gluten and provides support for avoiding unwanted symptoms resulting from gluten consumption.

who can benefit from Jarro-Zymes for Gluten Digestion?
Anyone looking to support digestion of gluten and facilitate digestive comfort in the case of inadvertent gluten ingestion.

Product Highlights
• Combines bacterial and fungal-derived gluten digesting enzymes
• The unique proteolytic enzyme blend targets both the internal and external peptide bonds that make up the gluten protein.
• Shown in a study to digest 96% of gluten within 60 minutes

An increasing number of individuals experience symptoms of gastrointestinal discomfort when consuming gluten-containing foods, such as wheat, oats, rye, barley and spelt. While the complete avoidance of foods with gluten can prevent unwanted symptoms, exposure to hidden sources of the protein in unsuspected foods is often unavoidable and can perpetuate vulnerability to unwanted symptoms. Furthermore, the passage of partially or undigested gluten through the intestines and the gut barrier may also contribute to additional symptoms, as well as the development of food sensitivities and intolerances.

Jarro-Zymes for Gluten Digestion contains a unique combination of bacterial and fungal derived, gluten-digesting enzymes, a “glutalytic ® ” enzyme blend of endo and exo-peptidases. These enzymes are capable of breaking proteins both into smaller peptides and amino acids, supporting a rapid and efficient degradation of gliadin, the major immune provoking protein fraction in gluten, to tiny quantities, by the time it reaches the small intestine. A combination of proteases, aspergillopepsin and DPPV, this enzyme blend has been shown to digest 96% of gluten within 60 minutes, nearly 30% faster than other products. In addition, a double-blind, placebo-controlled human clinical study found the formula led to statistically significant improvements in a variety of common digestive complaints. The study concluded that glutalytic ® reduces the frequency and severity of symptoms associated with gluten sensitivity.

Grappling with gluten
Gluten is made up of four components: globulans, albumins, glutenin and gliadin, with the gliadin fraction believed to cause most of the symptoms associated with gluten sensitivity. Its proteins are large, complex molecules, which contain thousands of amino acid sequences folded up within each one. Gluten’s exceptionally rich proline content is what contributes to the resistance of gluten peptides to digestion. When this big ball of peptides is insufficiently broken down, amino acid bonds within the each molecule of gluten remain, resulting in a partially-degraded protein which can lead to an array of unwanted symptoms. Jarro-Zymes for Gluten Digestion provides the specific enzymes to support the body in breaking down these complex bonds.

Aspergillus niger-derived proteases
Recent studies have shown gluten-specific proteases to protect small intestinal health and support a healthy mucosal lining. Aspergillus niger prolyl endoprotease or AN-PEP, is unlike other enzymes in that it remains stable down to a pH of 2 (therefore not subject to deactivation by the acidic stomach environment). It is completely resistant to digestion with pepsin, and has been shown in numerous studies to break down gluten. In a 2006 study, AN-PEP degraded gluten peptides 60 times faster than a prolyl oligopeptidase. A randomized double-blind, placebo-controlled pilot study in which 14 patients consumed toast (approximately 7 grams/day gluten) together with AN-PEP for 2 weeks, demonstrated the enzyme to be safe and well-tolerated. In addition, AN-PEP breaks down gluten before it enters the duodenum and is effective regardless of the size meal consumed. Other research has shown Aspergillopepsin (ASP) from Aspergillus niger enables detoxification of moderate amounts of gluten from whole-wheat bread in the presence of dipeptidyl peptidase IV (DPPIV) from Aspergillus oryzae.

Dipeptidyl peptidase IV (DPPV)
Dipeptidyl peptidase IV or DPP-IV, which belongs to the exopeptidase class (cleaves the terminal peptide bond) of proteolytic enzymes, is technically referred to as a prolyl-aminodipeptidase. It is one of the few enzymes able to facilitate the digestion of proline-rich proteins and polypeptides. DPP-IV degrades the immunodominant, proline- containing epitope of gliadin. It has also been shown to markedly enhance the gluten- and casein degrading capacity of other proteolytic enzymes, such as aspergillopepsin (ASP). While research on DPP-IV in humans is limited, its role in intestinal activity, in light of gliadin peptide exposure and in immune activation has also been demonstrated in populations with developmental delay.

recommended use
Take 1 to 3 capsules before each gluten containing meal or as directed by your qualified healthcare professional.
One capsule digests 20 g of gluten within 90 minutes.*

† = Recommended Daily Intake not established
* Rate of Hydrolysis is measured within 90 minutes under physiological conditions;
1 capsule (170 mg) is capable of digesting 20 g of gluten.

contra-indication
Persons with celiac disease or those who suspect they have the condition, should not rely on this product to consume gluten containing foods.
NOTE: If you have a medical condition, are pregnant, lactating, trying to conceive, under the age of 18, or taking medications, consult your healthcare professional before using this product.