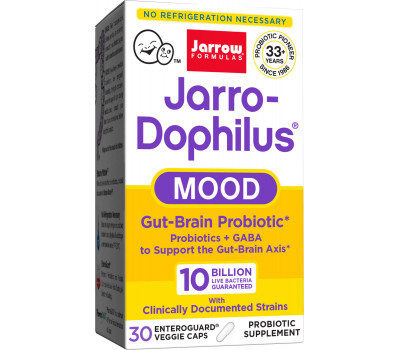 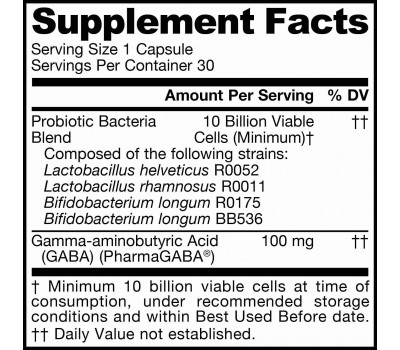 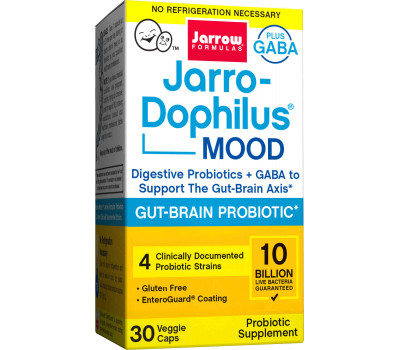 GABA is a neurotransmitter that helps balance mood, improves adaptability to stress and supports relaxation and calmness. GABA occurs naturally in various foods.

The Gut-Brain Axis is a bidirectional communication “highway” between the brain and digestive tract that can influence mood.

PharmaGABA® is a trademark of Pharma Foods International of Japan.

Gut-brain axis
There is a well-established link between stress, mood disorders, and gastrointestinal (GI) conditions and growing scientific evidence shows a link between the gut microflora and the gut-brain axis, which is a bidirectional communication system that exists between the central nervous system and the GI tract. The GI tract contains an enteric nervous system composed of an interconnected network of neurons. The brain sends signals to the gut and receives visceral information from the gut. Signals from the brain can influence the motor, sensory and secretory activities of the gut and messages from the gut can influence brain activity and behavior. The bidirectional signaling is regulated at neural, hormonal and immunological levels. This complex communication system not only ensures proper maintenance and coordination of the intestinal functions but also permits feedback from the gut that can exert effects on mood and behavior. It has become quite evident in recent years that alterations in gut-brain interactions are associated with gut inflammation, chronic abdominal pain, and stress responses and behavior.

Role of the microbiota
The gut microbiota is known to play an important role in our general well-being by contributing to various metabolic, structural and protective functions of the gut. Research conducted over the past decade has shown that alterations in the gut microbiota alters brain function and behavior patterns. Thus, this emerging microbiota-gut-brain axis suggests that the modulation of the gut microbiota may be a potentially effective strategy to influence activities within the gut-brain axis. Probiotic strains’ ability to support intestinal health and function, and especially maintaining intestinal barrier, is the foundation for potentially impacting the functioning of the brain-gut axis.

Animal studies examples using strains in Jarro-Dophilus® Mood
Strains in Jarro-Dophilus® Mood were evaluated in several animal studies for their ability to modulate brain-gut axis activities. In one study, L. rhamnosus R0011 and L. helveticus R0052 were administered to rats to determine if the strains prevent intestinal abnormalities induced by water avoidance test. The strains displayed the ability to improve intestinal barrier function and prevented intestinal abnormalities when subjected to chronic stress.
In another study, using a maternal separation stress, the same two strains were shown to be effective in reducing stress, in the stressed first-generation rats, but also in the second-generation rats. The strains L. helveticus R0052 and B. longum R0175 anxiolytic-like activity in rats were evaluated using the conditioned defensive burying test. The probiotic strains showed a significant effect on the global stress anxiety score and the effect was comparable to that of diazepam.

Human clinical trials with strain in Jarro-Dophilus® Mood
A double-blind, placebo-controlled, randomized clinical study was conducted on 75 healthy volunteers subject to chronic stress. The severity of stress-induced physiological signs was evaluated by self-assessment, using a 62 items questionnaire. The subjects received 3 billion viable cells per serving of L. helveticus R0052 and B. longum R0175 daily, or a placebo, over a 3-week period. At the end of this period, it was found that two stress-induced gastrointestinal discomforts, nausea/vomiting and abdominal pain, were significantly reduced as compared to placebo.
Bloating/flatulence also tended to diminish. It was concluded from this study, the first to test the effects of a probiotic on some stress-induced symptoms, that specific probiotic strains may provide beneficial effects on gastrointestinal functions for people subjected to chronic stress.

A second double-blind, placebo-controlled, randomized clinical study was performed on 55 healthy stressed subjects. The aim of this 30 days duration study, was to determine the effects of L. helveticus R0052 and B. longum R0175, 3 billion viable cells per serving, on psychological criteria associated with stress. Psychological signs of stress were evaluated, using a range of validated psychological assessment scales for anxiety, depression, stress and coping strategies that are normally used to evaluate anxiolytic drugs.
A 24-hour urinary free cortisol level, a biomarker of stress, was also evaluated. This was an unprecedented trial in the field of probiotics. The probiotic group reported an overall reduction in psychological distress, with an improved ability to cope with the stress of everyday life events.
Furthermore, the results of the self-assessment tests were correlated with a decrease of urinary free cortisol levels in the probiotic treated group.

GABA
GABA or Gamma-Aminobutyric Acid is the principal inhibitory amino acid transmitter of the central nervous system and is present in some 25-50% of all neurons.
As an inhibitory neurotransmitter, it plays an important role in regulating the neuronal excitability throughout the nervous system.
It acts by reducing the activity of neurons such as those involved in heightened state of excitability.
When nerve signals fire too quickly and carry anxiety-inducing signals, GABA acts to slow the signals down, reducing overwhelming feelings of anxiety and induce relaxation.

recommended use
take 1 capsule per day, preferably on an empty stomach, or as directed by your qualified physician

storage
Jarro-Dophilus Mood is room temperature stable and does not require refrigeration. Refrigerating is optional and will further extend the shelf-life by safeguarding the product from heat, especially during the hot summer months.
Keep out of reach of young children