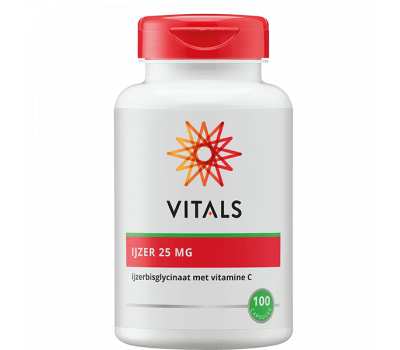 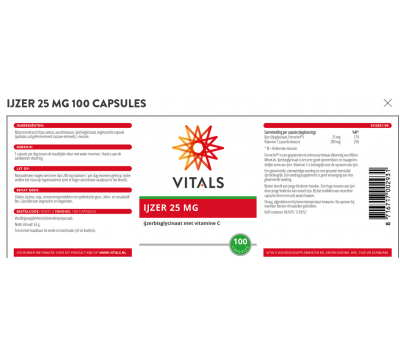 This products contains iron in chelated form as iron bisglycinate, in which each iron molecule is bound to 2 (bis) molecules of the amino acid glycine. The generic name for such a compound is called an amino acid chelate or amino-chelated mineral

The reason for using a chelate is that this form passes the stomach more easily without causing discomfort. Another reason is because this has better biological availability.

The formula has been improved upon by adding ascorbic acid (vitamin C) which increases absorption rates.
The iron bisglycinate is from the registered brand Ferrochel® by Albion Minerals, a major specialist in aminochelated minerals.

Iron is an essential trace mineral required as a component of hemoglobin and myoglobin for transport of oxygen to tissues.
Supplemental iron is essential during pregnancy and for many teenage males and females.

There are a number of circumstances in which the body’s need for iron may increase beyond normal. For instance, endurance athletics places special demands upon the oxygen carrying capacity of the blood and, at the same time, may damage blood cells due to excessive strike force on the feet in the case of long distance running.
Many athletes, including most female athletes, exhibit low to mid-range hemoglobin values. Depending on the sport and other factors, 8 - 58% of male athletes and 40 – 80% of female athletes exhibit anemia, numbers far higher than in the populace at large. Hence, the name “sports anemia.” Exercise performance, especially aerobic / endurance performance, can be significantly impaired by iron deficiency.

Special cases of risk of deficiency include those consuming diets low in both meat and vitamin C, donation of blood more than three times per year, adolescents, male and female athletes (especially teenage endurance athletes), the elderly and those who taken aspirin regularly.

Mechanisms of Action
Most of the iron in the body is found in the hemoglobin of red blood cells and in the myoglobin of muscle cells; it is required for oxygen and carbon dioxide transport. The functional groups of several enzymes in the Krebs cycle contain iron. Many neurotransmitters, such as dopamine, norepinephrine and serotonin, require iron for their synthesis. Iron deficiency anemia in early life seems to negatively affect behavioral and neural development.

storage
keep dry and closed at normal room temperature between 15 - 22°C.
preferably use within 4 months after opening the bottle
keep out of reach of young children