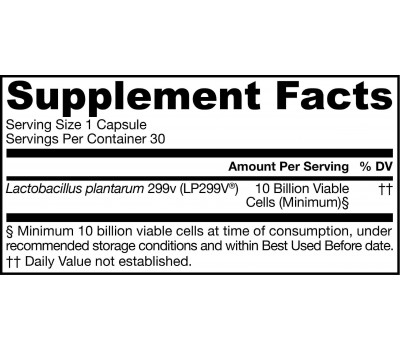 background reading
In the late nineteenth century, microbiologists discovered the association between gastrointestinal microflora and healthy and diseased individuals. The composition of microflora in the gut varies among individuals depending on diet, age, medication, and exposure to environmental and physical stress. The profile of these gut microflora seems to play an important role in one’s health and well-being. However, a Western diet has been shown to considerably discourage colonization of health-promoting bacteria, and it is associated with increasing occurrence of gastrointestinal discomfort in industrial nations. Thus, restoration of healthy gastrointestinal microflora using probiotics has been attracting tremendous public interest.
Jarrow Formulas Ideal Bowel Support 299v has been isolated and developed from humans using the most advanced technology to ensure the delivery of a high quality, effective and safe formulation of the Lactobacillus plantarum 299v strain to meet the needs of individuals who are interested in bowel health and comfort.

Lactobacillus plantarum 299v (Lp 299v)
Lactobacillus plantarum is a lactic acid producing Gram-positive bacterium that has been used for centuries for food preservation. It is commonly found in many fermented foods including yogurt, sauerkraut, pickles, brined olives, Korean kimchi, Nigerian ogi, as well as cheese, sausages, and stockfish. L. plantarum is also found in human and animal gastrointestinal tracts and saliva. The high content of this bacterium in naturally occurring foods and in the human body makes the organism ideal for the development of probiotics. A growing interest in L. plantarum has led to the discovery of the 299v strain, which has been isolated from human intestine and has been shown to have superior mucosal adherence and a general advantage in the gut. The complete Lp299v genome has been mapped, and it is one of the best understood L. plantarum strains on the market in terms of benefits and safety.

Healthy digestion and nutritional support
Lp 299v, among many other gut flora, plays an essential role in general digestion and nutritional absorption. It metabolizes sugars and fi bers into vital nutrients, such as short chain fatty acids (SCFAs), polyamines, vitamins, antioxidants, and amino acids. They are the primary nutrients for colonocytes and are essential for general gastrointestinal health and function.

Promotes healthy intestinal microflora
Lp 299v has been shown to have exceptional adherence and colonization characteristics on gut mucosa, compared to other previously tested strains, even in the presence of commonly used antibiotics. This ability prevents adhesion and translocation (penetration and entrance through the gut protecting layer) of undesirable microorganisms. Lp 299v is known to stimulate the secretion of mucin, which hinders the growth of undesirable bacteria, and stable colonization of Lp 299v also creates friendly intestinal environment for healthy microflora. Furthermore, production of SCFAs by Lp299v lowers colon luminal pH, creating an unfavorable environment for the growth of unfriendly microbes. The combination of the above leads to a reduction in circulating endotoxins which would otherwise cause over-stimulation of the immune system. In addition, multiple studies have shown that Lp 299v reduces the colonization of Enteropathogenic E.coli (EPEC), a Gram-negative bacteria that is often associated with occasional diarrhea and bowel discomfort.

Safety
Lp 299v has been widely commercialized and consumed by many nations for decades with solid safety record. The natural occurrence of this beneficial bacteria in food and human mucosa, and also the fact that the source of the organism used in probiotics is human mucosa, may explain its well-accepted tolerance in people.

Healthy bowel function: how does normal poop look like?

One of the major challenges during a heatwave is to drink enough water, so you don't end up dehydrated because the body evaporates so quickly.
One of the more painful results of dehydration is needing to spend much more time in the restroom, sometimes even resulting in a hemorrhage.
Vice versa, we eat more salads and BBQ-foods, both of which are known to cause diarrhea due to improper preparation or preservation.
It is quite obvious that in order to have a pleasant and not too long stay in the restroom, our stools should neither contain too little nor too much water. Most of us will probably have a habit of quickly inspecting their stool, even if it is just the brief moment before flushing it down the toilet. Apart from observing the consistency of your stool, what else can you observe from inspecting your stool?

What are the different types of poop?

Poop, also known as stool or feces, is a normal part of the digestive process. Poop consists of waste products that are being eliminated from the body. It may include undigested food particles, bacteria, salts, and other substances such as improperly absorbed drugs.
Sometimes, poop can vary in its colour, texture, amount, and odor. These differences can be worrying, but usually, these changes are not significant and will resolve in a day or two. Other times, however, changes in poop indicate a more serious condition.
Read more
Why celebrating life with food is important for our health

Why celebrating life with food is important for our health

Especially in the darkest months of the year, there seems to be an endless amount of celebrations.
No matter what is always a common theme: food is the main attraction! In fact, the focus society currently places on food has caused us to associate certain foods with holidays, past events and special times. When we sink our teeth into such foods, it can bring back memories we hold close and take us back to a time we enjoyed. Food is much more powerful than we think!

From catching up for coffee, relaxing over brunch, indulging in a long lunch or bonding at a BBQ, it’s hard to imagine getting together without the company of food. Food is something we all have in common, we all must eat, most of us find food pleasurable and trying new foods or cafes is a new experience we can share with others.

Symptoms and natural treatments of indigestion

Indigestion or heartburn can happen when your body has trouble digesting food. Anyone can get it on occasion, or it can be an ongoing problem. Heartburn is especially prominent in December with so many holidays accompanied with delicious foods, that prompt us to overindulge.

While acid reflux is a common phenomenon, not all symptoms of it, are very obvious.
When heartburn happens, for instance due to smoking, alcohol, medication, carbonated drinks or some foods that are difficult to process (spices, fats, acids, fiber) may cause a valve-like stomach muscle to loosen, allowing stomach acid to backwash into the esophagus. This exposes sensitive tissue in the chest to stomach acids, causing painful symptoms.
Common symptoms of reflux are a burning feeling in your chest or stomach, burping, bloating, gurgling stomach, acid reflux, heartburn, nausea or even vomiting.

Problems in your GI tract or other health issues also can cause indigestion. These include:
- acid reflux, gastroesophageal reflux (GER), or gastroesophageal reflux disease (GERD): A reaction to food and drink where contents come back up from your stomach. The acid can come up into your esophagus, the tube-like organ connecting your mouth and stomach. Acid reflux also can produce vomiting. This condition causes heartburn because of the high acid contents.
- irritable bowel syndrome: a disorder that affects your intestines. Symptoms include stomach pain, bloating, gas, constipation, and diarrhea.
- infection: a bacterial infection from Helicobacter pylori (H. pylori) can cause indigestion.
- gastroparesis: A condition that affects digestion. If muscles in your GI tract stop working, your body slows down or stops the movement of food. Symptoms include nausea, vomiting, stomach pain, bloating, and acid reflux.
- ulcer: A sore on the lining of your stomach (peptic ulcer), small intestine, or esophagus.
- gastritis: Inflammation of your stomach lining.
- stomach cancer: This is a rare condition, but indigestion can be one of its signs.
Read more
Can artificial sweeteners make you gain weight?

Early September we published an overview of various natural and artificial sweeteners that are currently available and possible avantages or disadvantages associated to them.
Until very recently the clear-cut explanation of all official governmental dietary agencies as well as most mainstream dieticians was that artificial sweeteners are harmless and not a single iota of proof was available to the contrary.

Even your humble writer still believed sweeteners are relatively harmless as by definition, rats and mice aren't human so evidence about harmfulness for those laboratory animals doesn't prove too much.
However, over time more and more evidence has come up that artificial sweeteners are truly not as good for your waistline as you think they are, in ways that wasn't looked at before. Our gut microbes, which have a bigger influence on your weight and insulin sensitivity than we realize, are negatively inflenced by the artificial sweeteners we ingest.
Read more
Irritable bowel syndrome

Many of us suffer silently from chronic bowel pain. Contrary to many other types of pain, we rarely go and see a doctor for treatment, unless the discomfort is intolerablen as with Crohn's disease, thinking there is not much that can be done.

While it is true there are few useful drugs that help with bowel pain, diet, lifestyle changes and supplements can and do help a great deal. Pinpointing what food exactly aggravates your symptoms is very important and calls for the so-called elimination diet in which you make a list of foods that worsen your symptoms.

recommended use
Take 1 capsule, 1 or 2 times per day with a meal, or as directed by your qualified health care consultant.

storage
Store in a dry and cool place. Does not require refrigeration, although refrigeration will further ensure shelf life.
keep out of reach of young children