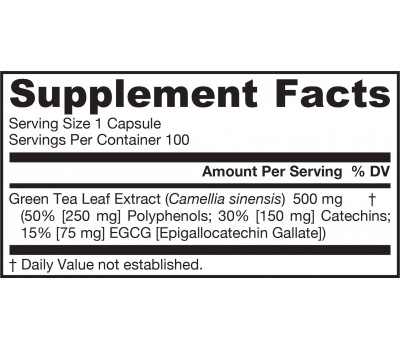 Jarrow Formulas Green Tea 500 is a very interesting product as in research it's main polyphenol EGCg seems to extend life in mice. The same polyphenol that increases fat burning and reduces C-Reactive Protein's (CRP's) that are a sign of inflammation. Studies with men undergoing a resistance training regimen the men consuming Green Tea had significantly lower CRP's in their blood stream than the control group. This contributes to the idea that with less CRP's in the bloodstream, less cortisol is released by the adrenals. Less cortisol means more muscle. At least in theory. You can try it yourself and see if this theory actually works.

Green Tea 500 is water extracted and consists of 40% polyphenols, including 30% catechins. Catechins are flavan monomers, the building blocks of OPCs. OPCs, OligoProanthoCyanidins, are polymers (or chains) of flavans. Catechins are generally more bioavailable and more potent antioxidants than proanthocyanidins.

code MPN:
GTC-117007
brand
Brand or make of the product, sometimes the name of the manufacturer
:
Jarrow Formulas
best before:
Dec 2020
appearance:
audience

And it makes sense statistically. The correlation between lowering your LDL and lowering your chances of having a heart attack or developing other forms of heart disease is well documented. Indeed, exercise and dietary changes are good for the heart partly because they lower LDL cholesterol levels.
Read more
Usefulness of herbal medicine in modern times

Today, plants are being used to treat a number of health concerns and conditions, including allergies, arthritis, migraines, fatigue, skin infections, wounds, burns, gastrointestinal issues and even cancer, proving that it’s true that food is medicine. These herbs are less expensive and they’re a safer means of treatment than conventional medications, which is why so many people are choosing to go back to this traditional idea of medicine.
Read more
Exercise or diet, what's better for weight loss?

Especially in January, we are asked whether it is better to lose weight by exercise or by diet.
The response I mostly give is that diet is the more efficient method but makes you grumpy and if you overdo it, will lose muscle, while exercise can make you happy, fit and strong.
A few years ago the discovery how in general, exercise doesn't make you lose weight made headlines.
In my former life as a long-distance cyclist I'd have shaken my head in disbelief.. after all, every single spring, fat would almost literally melt away once the cycling season started.

Anyhow, as counterintuitive as it seems to mile-eating cardio-junkies, exercising more is not the best solution to weight loss mostly because the weight piles on off-season.
True enough , once the season was over, the fat would pile on equally fast. Why?
Quite simply, unlike many of my cycling buddies who were also passionate about (marathon) skating, I didn't practice any other sport. Some others refused to skate indoor and only wanted to skate on natural ice, which has become a rarity in the the past 30 years!
Of course I knew exercise burns calories, but somehow it is very difficult to adjust to diet upwards or downwards as appetite lags behind so much!
Read more
What is PSA?

What exactly is PSA? PSA or Prostate-specific antigen is a protein produced by the prostate and found in the blood.
A PSA blood test can detect prostate cancer early, which makes it seem like a no-brainer to get tested.
Many prostate cancers grow slowly, so a PSA test may save the lives of some men whose prostate cancer would go undetected otherwise.
However, there is a downside to testing for PSA as quite frequently there is no real health risk even though somenone's PSA-levels are elevated. Some men will undergo unnecessary surgeries or radiation treatments, which could cause lifelong problems such as erectile dysfunction or incontinence.
Read more
Losing weight in a healthy way

Losing weight in a healthy way

Most of us have made at least one resolution for the new year and for many that will be to lose weight as well as eating more healthily and exercise more often.
While it is great to be able to fit back into that awesome pair of trousers that has become too tight, eating healthily should be your top prioritiy.
That is because eating healthily means you are paying attention to what you feed your body, rather than you simply fill it with empty calories.
Read more