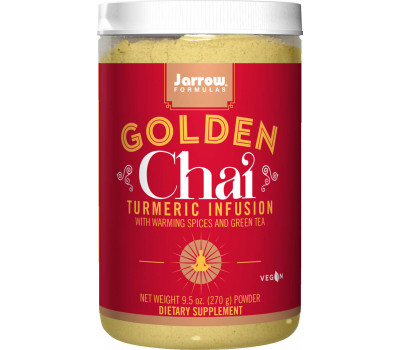 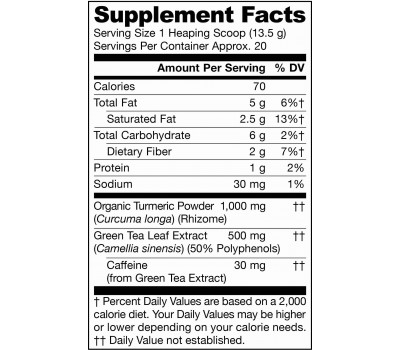 Jarrow Formulas Golden Chai is a contemporary vegan version of traditional chai tea, combined with Golden Milk, the classic Indian home recipe enjoyed for centuries.
Jarrow Formulas Golden Chai is a mixable powder in a base of coconut milk and almond flour plus organic turmeric, traditional chai tea spices, tea extract and a hint of black pepper.
Golden Chai invigorates the senses even as its spices warm the digestive system.

By this time of year, it has become warm enough to spend more time in our gardens. We don't just spend time gardening, but will want to dine here, too. And possibly prepare food on the BBQ or at least prepare a food buffet on holidays such as Kings Day. Unfortunately, a festive meal especially during warm weather is almost automatically associated with stomach bugs.

For elderly persons, the cause of food poisoning is mostly different. They have frequently been raised in a time of food scarcity and are less prone to discard food that is past its expiration date. Or as happening during the current lockdown, they will want to go grocery shopping as little as possible, so they may be eating food that would have been discarded otherwise. However, at their age, they will become sick more easily due to reduced immunity than a young person who has less qualms about throwing out spoiled food.

Foodborne illness, more commonly referred to as food poisoning, is the result of eating contaminated, spoiled, or toxic food. The most common symptoms of food poisoning include nausea, vomiting, and diarrhea.

Although it’s quite uncomfortable, food poisoning isn’t unusual. According to reliable data 1 in 6 persons will contract some form of food poisoning every year.

If you have food poisoning, chances are it won’t go undetected. Symptoms can vary depending on the source of the infection. The length of time it takes for symptoms to appear also depends on the source of the infection, but it can range from as little as 1 hour to as long as 28 days. Common cases of food poisoning will typically include at least three of the following symptoms:

Why celebrating life with food is important for our health

Especially in the darkest months of the year, there seems to be an endless amount of celebrations.
No matter what is always a common theme: food is the main attraction! In fact, the focus society currently places on food has caused us to associate certain foods with holidays, past events and special times. When we sink our teeth into such foods, it can bring back memories we hold close and take us back to a time we enjoyed. Food is much more powerful than we think!

From catching up for coffee, relaxing over brunch, indulging in a long lunch or bonding at a BBQ, it’s hard to imagine getting together without the company of food. Food is something we all have in common, we all must eat, most of us find food pleasurable and trying new foods or cafes is a new experience we can share with others.

Symptoms and natural treatments of indigestion

Indigestion or heartburn can happen when your body has trouble digesting food. Anyone can get it on occasion, or it can be an ongoing problem. Heartburn is especially prominent in December with so many holidays accompanied with delicious foods, that prompt us to overindulge.

While acid reflux is a common phenomenon, not all symptoms of it, are very obvious.
When heartburn happens, for instance due to smoking, alcohol, medication, carbonated drinks or some foods that are difficult to process (spices, fats, acids, fiber) may cause a valve-like stomach muscle to loosen, allowing stomach acid to backwash into the esophagus. This exposes sensitive tissue in the chest to stomach acids, causing painful symptoms.
Common symptoms of reflux are a burning feeling in your chest or stomach, burping, bloating, gurgling stomach, acid reflux, heartburn, nausea or even vomiting.

Problems in your GI tract or other health issues also can cause indigestion. These include:
- acid reflux, gastroesophageal reflux (GER), or gastroesophageal reflux disease (GERD): A reaction to food and drink where contents come back up from your stomach. The acid can come up into your esophagus, the tube-like organ connecting your mouth and stomach. Acid reflux also can produce vomiting. This condition causes heartburn because of the high acid contents.
- irritable bowel syndrome: a disorder that affects your intestines. Symptoms include stomach pain, bloating, gas, constipation, and diarrhea.
- infection: a bacterial infection from Helicobacter pylori (H. pylori) can cause indigestion.
- gastroparesis: A condition that affects digestion. If muscles in your GI tract stop working, your body slows down or stops the movement of food. Symptoms include nausea, vomiting, stomach pain, bloating, and acid reflux.
- ulcer: A sore on the lining of your stomach (peptic ulcer), small intestine, or esophagus.
- gastritis: Inflammation of your stomach lining.
- stomach cancer: This is a rare condition, but indigestion can be one of its signs.
Read more

recommended use
Mix 1 heaping scoop (13.5 g) with 120-180ml of hot water, warm milk, or warm almond milk and drink promptly.
Note: 1 serving provides approximately 30 mg of caffeine. If you have a medical condition or are taking medications, consult your healthcare professional before using this product.