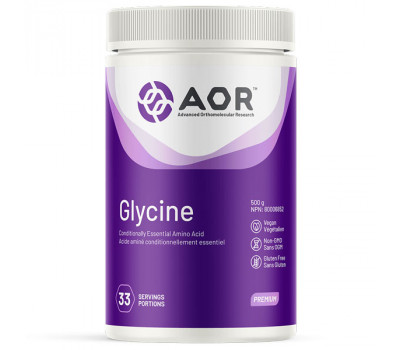 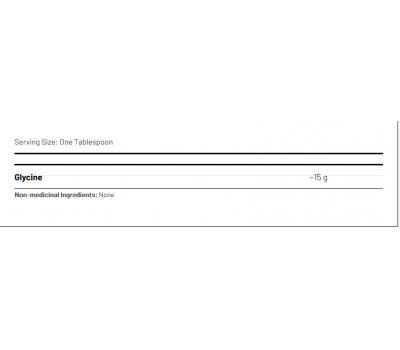 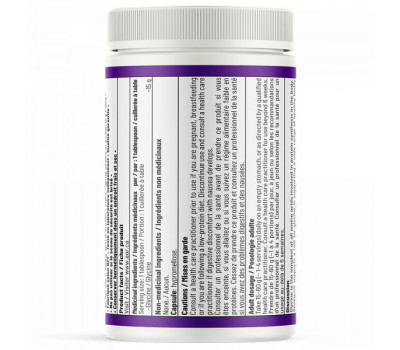 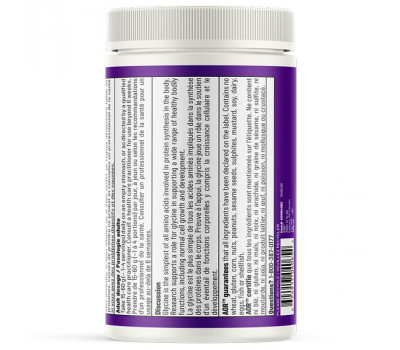 AOR Glycine is the simplest of all amino acids involved in protein synthesis in the body. Research supports a role for glycine in supporting a wide range of healthy bodily functions, including normal cell growth and development.

Glycine is essential for the phase-II detoxification of many drugs and chemicals, and for the body’s manufacture of such critical biomolecules as nucleic acids, the high-energy carrier creatine phosphate, and the key antioxidant glutathione.

Glycine is an amino acid that can be taken as a supplement in order to help reduce blood sugar levels, enhance the memory, and to improve symptoms of cognitive disorders. Some people are also interested in taking glycine in order to improve the health of their bones. Currently, research is being conducted to determine its potential to fight against cancer, which is of interest to many consumers.

Glycine, NMDA, and Memory
The N-methyl-D-aspartate (NMDA) receptor is critical for memory development and retention. However, the main activator of this receptor is glutamate, an excitatory amino acid whose excessive stimulation of the NMDA receptor causes a deadly overstimulation of the neuron which eventually burns the brain cell out. Fortunately, there is another site on the NMDA receptor complex which allows glycine to be the activator instead of glutamate. Glycine enhances longterm potentiation of memory without producing neurotoxicity.

Glycine and Growth Hormone (hGH)
For some time, research has been focusing in on the age-related loss of human growth hormone (hGH, or somatotropin) as a major source of the symptoms of aging. hGH helps keep our bones strong, our immune systems vigorous, and our wound-healing abilities optimal. It builds muscle and burns fat. Its levels are high in our youth, when all of these functions are at their peak, and their decline follows the decline in many aspects of youthful function. Less than 6 grams of glycine has been shown to more than triple hGH levels in normal, healthy men and women.

Glucose Metabolism
In one study of healthy men and women, glycine supplementation reduced the total increase in blood sugar after a high intake of glucose by a remarkable 50%. Importantly, this channeling of the glucose surge was not accompanied by any increase in insulin levels, nor did it push fasting glucose levels down into hypoglycemia.

Neurodegenerative Conditions
A study of healthy students and middle-aged men found that glycine supplementation significantly improved memory in all subjects and significantly improved sustained attention in the middle-aged participants. These effects are unique in that they do not involve a stimulant effect and don’t affect mood. Therefore, glycine “is likely to be of benefit in situations where high retrieval of information is needed or when performance is impaired by jet lag, shift work, or disrupted sleep.

Glycine, NMDA, and Schizophrenia
Several trials have now shown that high-dose glycine supplementation improves the “negative symptoms” of schizophrenia (such as “flat” emotional expression, mood disturbance, poverty of speech, apathy, and social withdrawal). This is an important result, since most schizophrenia medications only affect the “positive symptoms” of the disease, such as the hallucinations. Glycine also appears to boost the efficacy, and reduce the side-effects, of some schizophrenia medications. In an animal study discussed in the March 2010 journal called “Neuroreport”, it explained that the inhibitors of the glycine transporter mechanisms improved cognitive function in primates with schizophrenia. However, further research is warranted, glycine is currently being marked as a potential schizophrenia treatment.

Healthy Cell Activities
In animal studies, glycine supplementation has been found to promote normal cell growth and directly inhibit the progression of early lesions into larger masses of abnormal cells. This appears to be due to its ability to block the growth of blood vessels that feed unhealthy cells.

Prostate Health
Glycine can also help to keep the prostate gland healthy. One study proved that glycine was helpful for men in reducing the symptoms of prostatic hyperplasia.

Liver and Brain Protection
An animal study using rodents and included in the 2004 January journal “Die Pharmazie” researched the effects of glycine supplements administered to alcohol fed rats. The investigators discovered that glycine supplemented at 0.6 g per kg of body weight substantially increased antioxidant levels and reduced oxidative stress and in the liver and brain. Blood levels of vitamin E and C were also increased. The authors concluded that glycine has a potential protection of the liver and brain against alcohol-related damage.

Sleep
The neurological disease rapid eye movement sleep behavior disorder results in disturbed sleep and creates patient injuries. Additionally, people experiencing this disorder are at an increased risk of developing neurodegenerative diseases later in their life. A study on rodents which was published in the May 2011 edition of the “Journal of Neuroscience” concluded that mice bred to have glycine deficit in their bodies displayed a disorder which had a similar character to rapid eye movement sleep behavior disorder. The research showed that glycine is responsible for carrying out a fundamental role in this disorder and requires additional research to determine whether using this amino acid as a supplement would be beneficial for improving sleep.

Fears about contamination of eggs or supplements

In the past week of early June, a lot of fear was placed in the heart of the public of both Dutch, German and French customers, when officials from the National Food Safety Board announced eggs had to be destroyed due to contamination with a banned substance, called fipronyl.
The reason this happened, is that fipronyl is an amazingly effective insecticide that was perfectly legal for use in stables where egg laying poultry live. This insecticide was however banned from January 1 onwards for use on animals in the food chain, with the main reason behind the ban being its toxicity to bees.