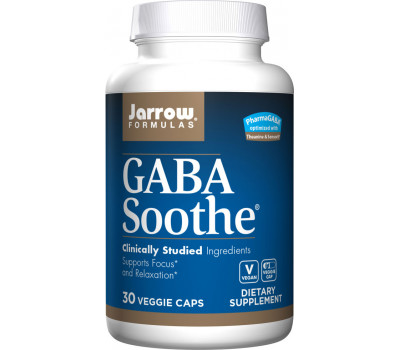 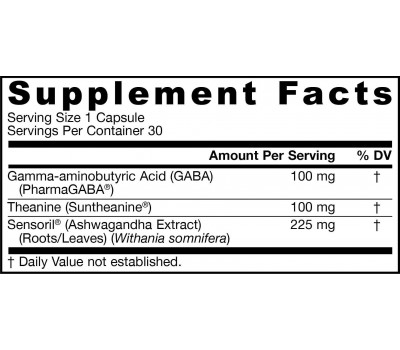 Jarrow Formulas GABA Soothe combines 3 well-studied ingredients that are useful in promoting relaxation and focused awarenss.
These ingredients are
1) PharmaGABA, a naturally fermented, clinically-studied form of gamma-aminobutyric acid,
2) L-theanine, an amino acid found in tea that is known to smooth the stimulant effects of caffeine and facilitate learning ability and
3) Sensoril, a standardized ashwagandha extract that has shown conclusive clinical trial effects in helping the human body better respond to stressful stimuli.
This formula helps the body better respond to stressful stimuli and may benefit learning ability by increasing alpha-waves and reducing stress-related beta-waves to promote calmness while maintaining mental focus.

who can benefit from GABA Soothe?
Persons experiencing mental and/or physical effects of stress wanting to promote a sense of calm, focused awareness and tranquil relaxation without drowsiness.

how does each ingredient function in GABA Soothe?
• Gamma AminoButyric Acid (GABA) promotes physical relaxation and mental focus by increasing brain alpha wave activity and interacting with the GABA neurotransmitter system
• L-theanine found in green tea, supports tranquil relaxation without drowsiness and may support learning ability through its effects on dopamine and serotonin levels
• Withania somniferia (ashwagandha) extract acts as an adaptogen to help the body reduces fatigue, tension and exhaustion associated with everyday stress and stress-related beta-waves

background reading
GABA: all brains alert Gamma-aminobutyric acid (GABA) is the major inhibitory neurotransmitter found in the brain. GABA functions to counteract excitatory brain signals helping to promote calmness and mental focus. One way of measuring relaxation and focus is by an EEG (Electroencephalogram). The greater the ratio of alpha waves to beta-waves produced by a brain, the greater the level of calm concentration.

In a human clinical study published in 2006, thirteen human subjects were given 100 milligrams of orally administered PharmaGABA. This led to a significant increase in alpha waves and a decrease in beta-waves as compared to controls. The study authors concluded that “these findings denote that GABA not only induces relaxation but also reduces anxiety.” These effects occurred within sixty minutes of ingestion.

Theanine: relaxation & learning L-theanine was identified as a constituent of green tea in 1949 and in the decades thereafter has become known as the reason for the uniquely calm, but alert, state caused by drinking tea. This differs from the overly excited state often experienced after drinking coffee, despite both having significant quantities of caffeine. Theanine is produced in the roots of the tea plant and then shuttled to the leaves where sunlight converts it to the catechin polyphenols characteristic of tea. Theanine also affects the taste of tea and in an effort to preserve theanine content some cultivators protect their plants from direct sunlight. Like GABA, theanine’s effects can be measured by changes in brain wave patterns.

In a human study conducted in Japan, oral intake of L-theanine “caused a feeling of relaxation among the human volunteers examined” according to the researchers. In following-up these results, eight volunteers were administered L-theanine and monitored by EEG. The researchers noticed an increase in alpha waves to bolster the subjective relaxing effects reported by the study participants. These changes typically occur 30-60 minutes after ingestion.

Another study published in the journal Nutritional Neuroscience in 2007, found that L-theanine given to human volunteers resulted in brain states characteristic of higher mental performance and improved attention three hours after ingestion. This study lends further evidence to the effects of L-theanine on learning and memory and augments previous neurochemical studies in animals that have shown oral L-theanine led to increases in brain dopamine and serotonin levels.

Adaptogenic ashwagandha
Withania somnifera (Ashwagandha) has a long history of use in Asia for balancing symptoms associated with stress. The active constituents are generally believed to be a class of compounds called withanolides. Sensoril ashwagandha is a patented proprietary extract of the Withania somnifera plant, and our special extraction process that allows us to obtain concentrated withanolides from the fresh roots and leaves of the plant, providing maximum activity and benefits. In the past, conclusive results using ashwagandha in humans have been difficult to come by despite some elucidating animal research.

A recent, double-blind trial using standardized Sensoril Withania somnifera (ashwagandha) extract (WSE) yielded conclusive results regarding adaptogenic activity in humans. Participants given a daily dose of 125 mg showed signifi cantly decreased levels of physiological and biochemical indicators associated with stress, like pulse rate, blood pressure and serum cortisol, as compared to placebo. Participants also had significantly decreased scores on the modifi ed Hamilton anxiety test (mHAM-A). Other groups given larger quantities (up to 500 mg/day), showed dose-dependent effects without the report of adverse events. As the authors of the study noted in their conclusion, “this study provides evidence that the consumption of WSE significantly reduces experiential and biochemical indicators of stress without adverse effects.”

The combination of the above ingredients provides a complementary support to relaxation and mental focus.