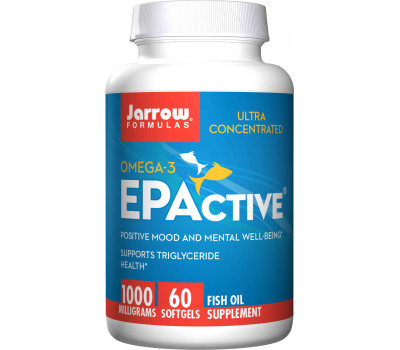 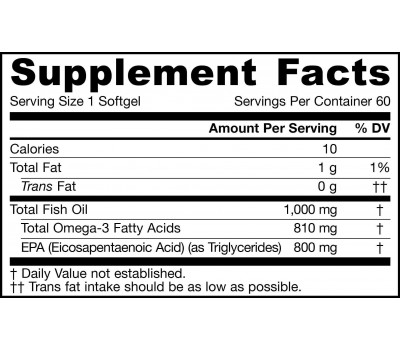 Discontinued, we refer you to MorEPA

Jarrow Formulas EPActive™ 60 softgels  contains a higher than usual amount of omega-3 EPA at 800mg per softgel in the triglyceride form from fish oil that has been ultra-purified and concentrated in Germany by molecular distillation.

EPActive™ meets the stringent proposed USP monograph for purity to remove environmental contaminants, heavy metals, such as mercury, and organic toxins, such as dioxins and PCBs. Natural mixed tocopherols are used as antioxidants to protect against lipid peroxidation.

Since the first studies in the 1970s on the cold water fish-based, fat-rich diets of the Greenland Eskimos, EPA (eicosapentaenoic acid) and DHA (docosahexaenoic acid) have been repeatedly recognized for their important role in health. While these two Omega 3 fatty acids were considered to have interchangeable health benefits in the past, the latest data shows that EPA has clinical applications that are unique and important for both a variety of bodily systems and for long term health.

Known as the heart healthy Omega 3, science has shown EPA to support key aspects of cardiometabolic health, including maintaining triglyceride levels within a normal range. In addition, EPA promotes positive mental well-being and mood, and a healthy cytokine balance.
A precursor for the platelet aggregation inhibitor, prostaglandin-3, and the eicasonoids, thromboxane-3 and leukotriene-5, EPA competes with arachidonic acid for inclusion in the lipoxygenase and cyclooxygenase pathways, which are key mechanisms for many of its health benefits.
Each softgel of Jarrow Formulas’ EPActive® provides 800 mg of triglyceride-based EPA, as found in natural, unrefined fish oil. The oil, which has been ultra-purified and concentrated by molecular distillation, meets stringent guidelines for heavy metals such as lead and mercury, as well as dioxins and PCBs, and contains natural, mixed tocopherols to protect against oxidation.

Omega 3s: Are you getting enough?
It is widely recognized that typical Westernized diets do not commonly provide sufficient amounts of Omega 3s to meet the average person’s physiologic needs. Since many people lack the enzyme to convert plant source ALA (alpha-linolenic acid) to biologically active EPA and DHA, the amount available for use in organs and tissues is often reduced. Also, ALA, at best, converts sufficiently to EPA. EPA is also a precursor to docosahexaenoic acid (DHA). Therefore, ensuring sufficient EPA levels directly is more critical. Since the body relies on certain desaturase enzymes to convert both omega-3 and omega-6 fatty acids into differently acting mediators, this further limits the availability of Omega 3s in the body. As a result, supplementation is often needed to support healthy levels of EPA and DHA.

Natural triglyceride-source EPA
While the amount of EPA in a fish oil is important for its efficacy, its delivery form is also a significant contributor to its effectiveness.
Ample research has found triglyceride-source EPA to offer significantly increased absorption and bioavailability than other forms. Triglycerides (TG) are composed of three fatty acids (such as EPA or DHA) bound to a glycerol backbone, and are rich in natural, unrefined fish oil. In a placebo-controlled, double-blind study, 5 different forms of EPA and DHA (including un-concentrated triglycerides, Cod Liver Oil, re-esterified TG, ethyl ester, or free fatty acids, and a corn oil placebo) were compared. The bioavailability of EPA and DHA from triglycerides was found to be superior to ethyl ester. Another double-blind placebo-controlled trial which compared a fish oil concentrate with EPA+DHA given as re-esterified triacylglycerides; corn oil (placebo) or fish oil concentrate with EPA+DHA given as ethyl ester, found supplementation of triacylglycerides over 6 months, led to a faster and higher increase in the omega-3 index than did the ethyl ester form.

Improved sense of well-being
Another one of EPA’s unique benefits is its effect on helping maintain a positive mood and outlook, speculated to result from modulation of arachidonic acid levels. Two different meta-analyses have shown EPA to be more efficacious than DHA in promoting a healthy mood. In a single-center, randomized, double-blind, placebo-controlled, parallel group trial, patients in the EPA group showed a significantly improved mood at the study endpoint compared with those in the DHA or placebo groups. Higher levels of EPA are also associated with better ability to cope with stressors.

Cytokine balance and normal levels of inflammation
EPA’s ability to compete with arachidonic acid also allows it to promote normal levels of inflammation. High EPA/ arachidonic acid blood ratios have been associated with normal range cardiovascular markers, among participants with higher CRP levels. It has also been shown to cause a dose-dependent decrease in neutrophil respiratory burst in the older men. Increased incorporation of EPA into plasma or phospholipids has also been associated with decreased production of prostaglandin E2 in men.

Jarrow Formulas’ EPActive® provides 800 mg per gel cap of well-absorbed, triglyceride-based EPA, as found in pure and natural, unrefined fish oil. Shown to support normal triglyceride and cytokine balance, positive mood and more, EPActive® is an ideal choice for those looking to reap the unique health benefits of this essential Omega 3 fatty acid.

recommended use
take 1 to 2 softgels per day with a meal, or as directed by your qualified healthcare professional.

contra-indications
people with a medical condition like seafood allergies or coagulopathy, or who are taking anticoagulants or other blood thinning medications, or facing surgery should consult their health care professional before using fish oil.