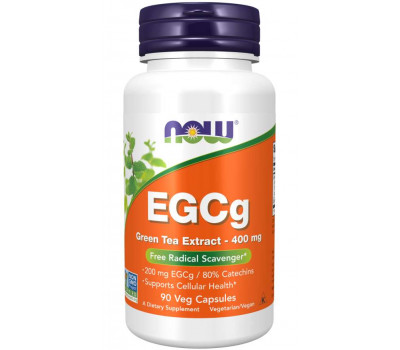 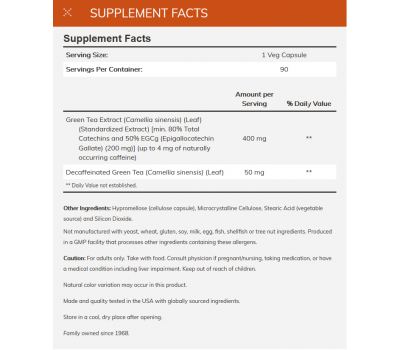 One capsule of NOW® Green Tea Extract with 200 mg EGCg possesses the phytonutrient content equal to about 2-3 cups of green tea. Green tea’s bioactive compounds include polyphenols and catechins, which are known to exhibit potent free radical neutralizing properties.
Its most abundant catechin, EGCg has been scientifically demonstrated to assist in maintaining healthy tissues in the face of normal metabolic stress and to support proper cell cycle regulation.

EGCG Green Tea Extract 400 is a very interesting product as in research it's main polyphenol EGCG seems to extend life in mice. The same polyphenol that increases fat burning and reduces C-Reactive Protein's (CRP's) that are a sign of inflammation. Studies with men undergoing a resistance training regimen the men consuming green tea had significantly lower CRP's in their blood stream than the control group. This contributes to the idea that with less CRP's in the bloodstream, less cortisol is released by the adrenals. Less cortisol means more muscle. At least in theory. You can try it yourself and see if this theory actually works.